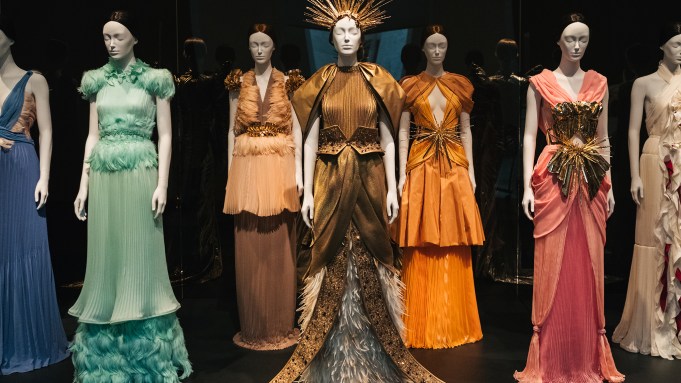 While there are plenty of opinions about Catholicism — past, present and future — the Met’s “Heavenly Bodies: Fashion and the Catholic Imagination” is meant to be a museum journey examining how the Catholic Church has inspired legions of designers.

Why Catholics? First mulling over a religious-themed exhibition four years ago, The Costume Institute’s curator in charge Andrew Bolton planned to zero in on five religions: Islam, Judaism, Buddhism, Hinduism and Catholicism. But starting out last May with a storyboard, there was such a huge imbalance of designers who swung toward Catholic and Christian iconography that the other four religions looked “very tokenistic” and he worried that the imbalance would be misinterpreted.

Gesturing toward a chasuble of Pius IX, which took 15 women 16 years to embroider, Bolton said, “It’s better than anything you see in the Lesage atelier in Paris. It’s just extraordinary. I think that one’s faith, no matter what faith you adhere to, generates an extraordinary creativity. That is what I would love people to come away with. It’s not always Catholic. To reflect on their own faith and whether that has impacted their own creative development and whether that generates or fuels one’s creative development. I find that really fascinating — how faith has created such extraordinary works of art, whatever it is.”

Rick Owens, Ann Demeulemeester, Lanvin, Cristóbal Balenciaga, Viktor and Rolf, Thom Browne, Chanel, Yves Saint Laurent, Maria Grazia Chiuri and Pierpaolo Piccioli of Valentino, Riccardo Tisci, Madame Grès, Thierry Mugler, Roberto Capucci, Valentina, Dolce & Gabbana, A.F. Vandervorst and Rodarte are among the designers featured in the show. Many were raised Catholic but are no longer practicing, according to Bolton, who only mentioned his Catholic upbringing and “still a believer” status in passing. A gold metallic Rodarte dress inspired by the Bernini sculpture “Ecstasy of Saint Teresa,” a Cristóbal Balenciaga evening dress with a Madonna veil and Roberto Cappucci’s “Agel D’Oro” dress are housed in the Robert Lehman gallery.

More unexpected and slightly haunting is the faintly lit row of mannequins wearing choral robes designed by Cristóbal Balaenciaga in the Medieval Sculpture Hall’s balcony. The designer was asked to create a robe for the Spanish choir Orfeón Donostiarra in 1945 and redesigned the white tunics in 1964. Women employed in his workroom sang in the ensemble and the robes are still worn by the choir today. Balenciaga, who attended mass daily, considered joining the priesthood and had an uncle who was a parish priest, also made cassock soutaines for priests, including the one at his burial, Bolton said. Balenciaga’s one-seam wedding dress, which actually required five seams, is a “Heavenly Bodies” highlight for Bolton. A Viktor and Rolf dress from the designers’ Russian Doll collection, juxtaposed with two sculptures of the Madonna and child at The Cloisters, is another favorite.

Eons before those designers started their businesses, many major art museums started their collections with religious paintings, Bolton said. Nevertheless, “a lot of critics will talk about the political implications of the Catholic Church, which are very real, not just antigay marriage, antiabortion, there are so many aspects. That’s a different showing, a completely different showing. This show is really not about that. Part of it is the idea of aesthetics, which every religion has. But particularly in the Catholic faith, even [Pope] Benedict XVI wrote about beauty being the first sort of access to God in religion, not in the Catholic religion, the aesthetic in beauty, rather than truth, rather than doctrine is what gives you your sort of first vision of God generally…Yes, of course religion is very subjective and how one practices religion is very subjective. Even how the more than 1 billion Catholics practice Catholicism is very subjective. Some go to church, some don’t go to church. Some have a very private relationship to God. Some have a very public relationship to God.”

To find out if anything would be considered “inflammatory” (though Bolton said he wouldn’t have taken it out, he wanted to be prepared), he consulted with James Martin S.J. “To my disappointment, there actually wasn’t. There was one piece a crown of thorns (from Sean Leane) and the chalice potentially. In an interview last week, the Jesuit author mentioned that he cautioned about the crown. Martin said of the show, “The fashion they have is beautiful. It reminds people that in terms of Catholic art, we have to look at Balenciaga at the same time we look at Michelangelo. These are both artists influenced by Catholicism. That might be a surprise to a lot of people. Catholic art is usually Michelangelo, Caravaggio, da Vinci hanging in a museum and not hanging on people. It’s a great insight to expand people’s idea of what Catholic art can be.”

The average museumgoer may not realize that it took 12 trips to the Vatican for Bolton to present the idea and win over members of Pope Francis’ inner circle. After four flights to Rome and numerous meetings, he figured out the Sistine Chapel Sacristy housed what he was in search of and not the Vatican Museum, as originally believed. Asking for six items and hoping to get four, he wound up with 42. Paramount among them is a papal tiara with 19,000 gems, of which 18,000 are believed to be diamonds. Descending the stairs to the Costume Institute, viewers pass by an Henri Matisse-designed chasuble for the Chapel du Rosaire. The first stop is a zimarra, fascia and zucchetto (a caped version of the long soutane, a belt and skullcap) worn by John Paul II. More recognizable are his red leather shoes, which helped earn him the nickname “the Prada Pope,” even though the shoes on display actually were made by Loredano Apolloni. All of the Vatican-approved pieces are encased in cubes in the Anna Wintour Costume Center and are not exhibited with any fashion per order of Rome. (Some designers were less willing to loan pieces, due to the interest in fashion exhibitions, which Bolton said is at a 25-year high.)

Speaking animatedly above the incessant back-up beeper of a nearby mini-forklift, Bolton surmised the hectic scene looking a little like someone who still couldn’t believe his good fortune. Between the Vatican dealings and the logistics of clandestinely installing fashion in public spaces, staging had to be handled like “a military operation.” Bolton said with a laugh, “Anna [Wintour] always jokes that The Met is like the Vatican in terms of its complexity. There is no comparison. We’re like kindergarten compared to the Vatican. The Swiss Guards are extraordinary. All your ideas and mythologies about the Vatican are completely true. I’m always disappointed when you have these ideas and myths and they’re not there. They’re there and more. It’s so shrouded in mystery and politics. Just working with the priests, I grew up with Jesuits, I’m used to them, but I forgot how absolutely brilliant they are. They’re art historians, theologians, politicians, intellectuals, comedians. They are so nimble-minded.”

Spanning a few public areas of the museum as well as the AWCC and The Cloisters further north, “Heavenly Bodies” juxtaposes fashion with religious art. Installing what Bolton called “a series of interventions” was not meant to tell the history of fashion’s engagement with Catholicism, but to tell the history of the Met’s engagement with religious art. Installing Saturday’s preview left a lot to the imagination, considering mannequins in the Byzantine Gallery and the Medieval Sculpture Hall remained swathed in muslin. Amidst mosaics in the South Byzantine Gallery, what lay beneath the five mannequins with platinum blonde wigs were gold metal mesh dresses (and one silver one) from Gianni Versace’s fall 1997 collection.

Referencing how Catholic icons embellished many “groundbreaking” Versace collections, Donatella Versace wrote, “Gianni’s use of such images, however, was never literal. Nor was it profane…his intention was to make people stop and contemplate their wonder.” To that point, Versace’s 1991 leather “Perfecto” jackets embroidered with Byzantine crosses are on view in the crypt. His sister reimagined them for spring 2018 to note the 20th anniversary of his death. Versace, along with Christine and Stephen Schwarzman, are sponsors of the sprawling show, which canvases 58,600 square feet. (Schwarzman’s Blackstone Group owns 20 percent of the Versace company.)

And Bolton is a little wary of how guests will interpret “the Sunday best” dress code for Monday night’s Met Gala which, he said, comes “with this sort of implicit plea to dress more modestly.” Knowing you can’t control what guests will wear, he said, “Sometimes the popular imagination conflates the two that the party is part of the exhibition. It’s the most extraordinary fundraiser but it’s a party. It’s very church and state. But at the end of the day, it’s a party. People come to have fun. It’s a chance to dress up. Talk about subjectivity, that’s the ultimate subjective.”

Other Met gala dress codes turned out to be problematic, even the 2013 one for “Punk: Chaos to Couture.” Bolton said, “Dolce & Gabbana said, ‘Sometimes fashion is just fun.’ Part of me agrees with that, part of me doesn’t. That’s why it’s criticized and that’s also why people love it. There’s always a double-edged sword. I think there’s an inherent sexism around fashion too. It’s associated with women so it’s dismissed much easier than any other art form.”