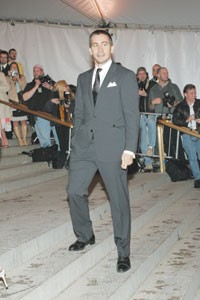 VENI VEDI VICI: Walking into the Costume Institute Ball alone Monday night, Catalina Sandino Moreno, in Michael Kors, found a bevy of suitors. After dinner, she was spotted hand-in-hand with Ian Somerhalder, a will-of-a-wisp formerly of the ABC series “Lost,” and then deep in conversation with an attentive Jake Gyllenhaal, who had his arm snugly around her waist until 3 a.m. at Bungalow 8. Gyllenhaal had already seemingly exchanged numbers with Daria Werbowy. Other potential hookups included a chummy Naomi Watts and Liev Schreiber (who arrived with Elijah Wood) as well as Johnny Knoxville, who split from Jessica Simpson when a photographer neared. Knoxville walked into Bungalow 8 solo. For her part, Simpson said: “Michael Kors is the best date ever.” … Jennifer Creel, in an unwieldy Carolina Herrera, said that next year she hoped to have an extra $15,000 seat for her train. In response, pal Gigi Mortimer advised against wearing long gowns to these kind of parties…Upon David Lauren’s entrance, a cater waiter remarked, “What is Donny Osmond doing here?” … Marilyn Manson came attired in a John Galliano soldier’s jacket decorated with bones. He had to replace some of them after Dita Von Teese’s dog ate them. “I only have human bones at home,” he said. “But that would have been weird so I used chicken bones instead.” Meanwhile, he recalled the time Karl Lagerfeld came to his house to photograph him for Interview magazine: “My house is pretty dark and he was wearing sunglasses the whole time so he couldn’t see s–t. I did get a shirt out of it. I also got this kind of Batman cape. I haven’t quite figured out when to wear it.” … Every designer boy in town, from Francisco Costa to Viktor Horsting and Rolf Snoeren to the Proenza Schouler boys and Matthew Williamson made it a late night at Bungalow 8. … Mario Testino chatted for ages with Hayden Christensen, in Dior Homme, about their GQ cover shoot. Christensen had seen the final print of “Revenge of the Sith” the previous evening … Lindsay Lohan missed her flight from Los Angeles where she was presenting at the Movieline Awards so she had to cancel … After Rachel Weisz dodged a reporter’s query about her initiation into the world of Chanel, Darren Aronofsky asked his girlfriend, “Really, I’d like to know, when was the first time you learned about Chanel?” … Jennifer Connelly had to introduce herself to Nicole Kidman in the ladies’ restroom. After announcing Renée Fleming’s performance, Kidman chatted with Sean “P. Diddy” Combs throughout the opera singer’s two songs … “I’m wearing a nightgown,” said Lynn Wyatt of her vintage Chanel, which she last wore upon being honored by the Houston ballet … Sloan Barnett arrived in a Chanel couture gown she’d had made for the rehearsal dinner of her wedding, which took place eight years ago on the stage of the Metropolitan Opera…Speaking of weddings, Ellen Pompeo, of “Grey’s Anatomy,” was telling her boyfriend she’d like to get married at the museum … Justin Portman told his wife, Natalia Vodianova, to put her hair in cornrows. They were out by the end of the night.