Mets’ Jacob deGrom and Noah Snydergaard Getting Ready for Next Season

Neither pitcher plans to cut his hair in the off season. 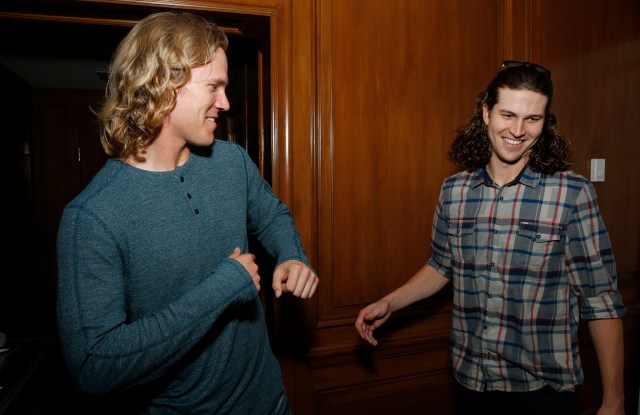 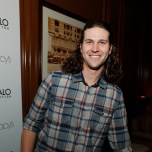 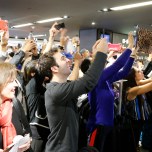 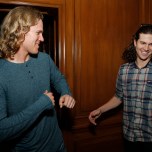 Jacob deGrom is not going to cut his hair after all.

The New York Mets star pitcher — who said during the World Series that his trademark long locks were “driving him nuts” — has had a change of heart.

“I don’t think I’m going to cut it,” he told WWD during a personal appearance at Macy’s Herald Square for Buffalo jeans Thursday night. “I’m going to clean it up, but it’s still going to be a decent length, I think. I can’t let him take over the hair wars,” he said, pointing to his teammate Noah Syndergaard.

“But I think you might have said it,” Syndergaard retorted with a smile.

“I’ve got to keep it up,” deGrom said. “There’s a little superstition there. I started growing it out my junior year in college when I started pitching, and for some reason, every since then, I’ve just kept it. I have no clue why, [but because I’m now known for it] it sticks I guess.”

Not exactly sporting a crew cut himself, Snydergaard said he, too, expects to keep his hair long. “I think subconsciously, I’m just too lazy to go cut it. I can’t say it really defines me, but it’s kind of laid-back and casual and that somewhat describes me as a person.”

It also describes his sense of style.

“I normally dress casually, jeans and a shirt,” he said. “We really like what Buffalo has done for us.”

DeGrom agreed, saying: “They’ve done a good job and they fit — they’re long enough. Normally that’s tough to find for us.” DeGrom is 6 feet 4 inches and Syndergaard is 6 feet 3 inches.

The pitchers, who are fresh from their loss to the Kansas City Royals in the World Series, admit they were disappointed, but said they’re more determined than ever. “Getting a taste of what we did is going to help motivate us for next year,” deGrom said. “The Royals are a prime example of a team that got a taste of it and ended up winning. That’s our main goal, so a little time off and then right back at getting ready.”

His teammate agreed: “Looking at the Royals this past Series just made us hungrier for next year.”

DeGrom thinks the team’s chances are good in 2016.

“We have a really good team and our pitching is really good. And David Wright being back healthy helped us out a lot.”

Syndergaard added: “Part of our success this year was our ability to come together as a team and our resiliency in adversity. We were plagued by injuries at the beginning of the year. But guys came in to fulfill those roles that were missing. And once those guys came back healthy, they came back strong as ever and were able to contribute as soon as they made it back in the lineup.”

Is Syndergaard worried his brushback pitch to Alcides Escobar in Game 3 is going to make him a target next season? “I wasn’t trying to take him out, I was just trying to make him uncomfortable,” he said with a shrug.

For now, the pitchers are looking forward to a little time off before they have to report to spring training camp in mid-February.

DeGrom said he’s planning to “be in Florida, it’s a short time off and then it’s back to getting ready for next year.”

Syndergaard said he plans on “spending a couple of weeks in New York just enjoying some things I didn’t necessarily have time to do during the season. Then I’ll go back to Texas and just prepare for next season, relax a little bit with the family and just unwind.”