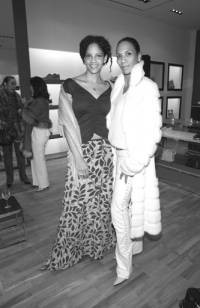 Miami may have hit a record low of 38 degrees last week, but even the frigid winds gusting off the Atlantic couldn’t keep the city from generating heat over the weekend — thanks to the opening of a Hogan store in Coral Gables and the Shore Club’s SkyBar.

On Friday, ladies like Emilia Fanjul Pfeifler, Lourdes Fanjul, Tracy Mourning, Maria Buccellati, Christina Getty-Maercks and Maritere Secada wrapped their bare shoulders in furs and headed to Hogan, where they sipped cocktails — outside — beneath 6-foot-tall heaters and palms that had been shipped in.

The gang later headed to SoBe to dine outdoors at the Delano’s Blue Door, but the phrase blue lips was also apropos. Although hotel blankets were graciously offered, all the girls deferred.

“We should have designed wraps for the dinner,” joked Claudio Castiglioni, president of Tod’s USA.

Afterward, the surviving socialites headed to the Shore Club’s SkyBar, where they joined Jade Jagger, Luke Wilson, Stephen Dorff, Sofia Coppola and Tamara Beckwith, who were huddled in the Red Room lounge, the club’s only indoor area.

By the end of the night, those who hadn’t already conceded to the weather headed home as SoBe police pulled the plug on the poolside DJ. But Jagger, Wilson and Dorff just headed to Mynt lounge where they partied with 15-year-old DJ phenomenon Jonathon Shriftman, who was up way past his bedtime.

Antiques and children have never made the best of bedfellows. But thoughts of sticky fingers on priceless wares weren’t enough to keep several young and expectant women from shopping at the Winter Antiques Show Young Collectors’ Night on Thursday.

Kirna Zabête’s Beth Buccini, five months pregnant, also hit the booths at the Seventh Regiment Armory, while the seven-months pregnant co-chairman Susan Fales-Hill lingered at the silent auction, where a bidding war ensued between friends Emilia Fanjul Pfeifler and Ogden Phipps for the dinner at Rao’s. When they realized they were one-upping each other, they decided to dine together. Phipps shelled out $2,000.

“It better be the best dinner of your life!” Fales-Hill laughed.

Downtown, future antiques collectors like Casey Johnson hit Bungalow 8, where Nicky Hilton was set to unveil the pepto pink “Bungalow” bag, the latest addition to her handbag collection. But it wasn’t ready in time.

“I told Nicky my dachshund wouldn’t fit into the bag,” said Liz Cohen, “and she told me just to fold it in half.”