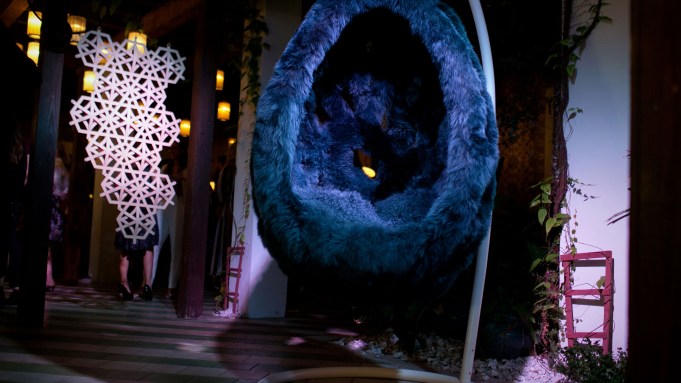 MIAMI — Time is on Louis Vuitton’s side.

Ten years ago, when he was at Fendi, Vuitton’s chief executive officer Michael Burke met Design Miami/ founder and developer — and major art collector — Craig Robins, who asked if he would be interested in participating in his vision for the Design District. In the years since, the area, which was originally a furniture district, has become a major meeting point for luxury fashion and public art.

“This was no man’s land 10 years ago,” said Burke on Wednesday morning from the fourth floor of Vuitton’s boutique. The floor had been transformed into a jungle oasis, with floor-to-ceiling live walls and Astroturf for carpeting. Exotic bags hung suspended in the air, joined by the house’s iconic trunks and pieces from the Objets Nomades collection, which is also shown in a booth at Design Miami/ and was celebrated the evening before at SoHo Beach House.

Burke shared two conditions that he relayed to Robins when discussing involvement in the project a decade ago: The area needed a critical mass and, as an outdoor mall, to be planned in such a way that limited cars in favor of pedestrian movement.

“Today it’s much more difficult to master plan,” Burke said. “Forty years ago, you plan a mall and build a mall according to plan and people would show up; it was all very scripted. Today, urban planning is a lot of serendipity: things pop up, things appear, and you just have to be ready for any options,” he added. “Ten years later, it’s all come together. Nobody was believing, most brands were dubious.”

Like everything with Vuitton, all roads point back to the trunk, which was originally created for functional travel. (A trunk was commissioned last month to ship Vermeer’s “The Milkmaid” to Japan.) “We’re fundamentally a design house,” he said. “The trunk is an object of design. It’s the reason why something that was invented in the 19th century is still relevant today, it’s because it has strong design. Design is what makes something last. Fashion comes and goes; design is something much more enduring.”

Related to that concept, the Objets Nomades collection is rooted in the same values: travel and design integrity, with a bespoke quality. Each of the items is produced in very limited quantities, and is customizable. Want a certain shade for the Campana Brothers’ hanging cocoon chair? No problem.

Two through-lines connect the collection of objects: one, the use of leather, and two, a commitment to pursuing ideas that aren’t limited by time.

“We don’t have time constraints. If it doesn’t make Miami, it’ll make Milan. If it doesn’t make Milan, it’ll make Miami the following year,” Burke said. “Most designers, as you know, they have to make a show, they need to make the orders. Every designer that works with us is a blank sheet of paper. The amazing thing is at the end of this process, what they come up with is part of the family, and it’s not because there’s a brief — there is no brief, there’s no marketing brief,” Burke said. “And yet when we put them all together it looks like it was designed by a collaborative effort.”

As for how designers are chosen for the travel-inspired collection — which includes designs by Atelier Oï, Marcel Wanders, Tokujin Yoshioka, and, as of this year, Atelier Biagetti — Burke shared, “Very often they select us. It’s a little known fact.

“They approach us because they’re aware of it; they see how the design intent is respected; they see the integrity of the making of, the designing and fabrication,” he said. “It was not an exercise in marketing, it’s an exercise in design and fabrication. Most pieces are not as radically new as you’d think, but nobody’s been able to make them. Behind the scenes, the special sauce is turning shapes into functional reality. It’s like a shoe, the closest thing we make is a high heel, that has to have the weight of the person, so that’s an engineering feat; the stiletto is an engineering feat first and foremost, and then the styling is to make that engineering feat disappear, look weightless, magical.”

Such is the case for Atelier Biagetti’s Anemone Table, which features an oval glass pane atop a wavy leather base.

“That one took us so long, because again it’s a table: 12 people have to be able to sit at it and lean on it and it has to stand up, but you try to make it levitate,” he said. “It’s where design meets engineering.”

And there’s another through-line for the collection: Many of the objects are projects that the designers always wanted to do, but were unable to realize because of financial, manufacturing or aesthetic reasons. For example, the Campana Brothers’ Bomboca Sofa, an aggregate of plush mounds. “I can see that piece never getting past surveys or focus groups, or marketing people,” Burke said. “That’s exactly what we’re looking for, something that’s been rejected.”

The result is a collection that aims to continue to surprise and inspire, and hopefully stand out amidst a landscape cluttered with formulaic artist collaborations.

“I don’t do collaborations anymore; I stopped doing them after Supreme. I see so many that are doing it because it’s the thing to do; we did them when it was the thing not to do, it was controversial. But most importantly, I was trying to do it with somebody that was at opposites of us, where there’s going to be creative tensions. We come from different worlds, different design aesthetics, and you want that clash to happen,” he said.

Burke pivoted to Latin, specifically the origin of the word “snob”: sine nobilitate, or, “without nobility.” From his vantage, culture is experiencing an anti-snobbish movement at the moment, where art, design, music, sport and fashion are all converging. “If you’re not a snob, you’ll embrace these contrasts,” he said.

This idea is reflected through the brand’s two lead designers: Nicolas Ghesquière for women’s, and Virgil Abloh for men’s.

“It’s through music that Virgil came on board with Kanye. He did a concert with him 12 years ago in Tokyo, and 12 years later, he’s the men’s wear designer. It’s all these cross currents,” Burke said. “Then I think Vuitton is probably the only house that could have Nicolas, who’s a couturier, very, very heavily researched and intellectual and far-reaching, influences many, many designers, and he’s a product of the French couture business. And then Virgil, who is the complete opposite. And they’re both working on the same thing, and they’re converging. That was my hope, and it’s happening.”

For the rest of his time in Miami, Burke planned to take his wife’s lead in navigating the fairs. And who knows? Maybe he’ll make it to one of Abloh’s late-night DJ appearances around town.

“I was with him in Italy last week; I can’t keep up with him. To each their own. Virgil, I tell him, ‘You’ve got to start picking, you’ve got to be careful because you’ll burn out.’ He’s appreciating the size of Vuitton — he knows it, but it’s one thing knowing it and experiencing it. But I do want him to remain — he doesn’t like the word — but for lack of better word, a disruptor. For that you need to stay plugged in with many, many influences, which he is.”

Burke was in fact wearing Abloh’s first shoe design for the brand, a black dress shoe accented with a red bungee toggle.

“I was on the plane with Christian Louboutin and he was looking at them intently. I was like, they’re black, it’s black, it’s not red! It’s just the rubber part that’s red,” said Burke, referencing the sole. “They’re very comfortable. I could walk all day long in them.”