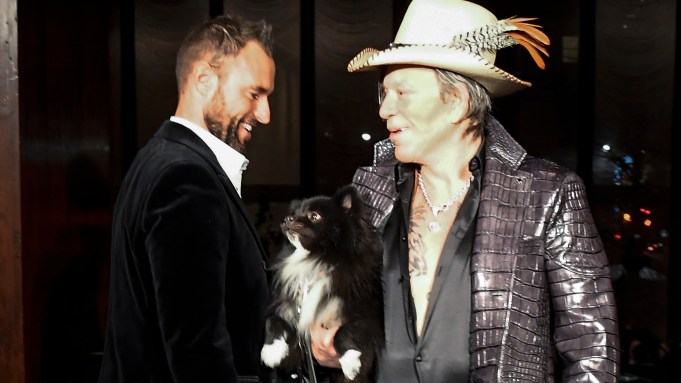 Where else but NYFW could a day begin with Carolina Herrera and end with Philipp Plein, a man whose showgoers have come to expect the unexpected — and where they know they’ll be in for a multihour, entertainment-filled evening.

This season, Plein took over the elegant, swanky Midtown restaurant The Grill for his two-part showing of both Billionaire and Philipp Plein, which requested black-tie attire and served a three-course meal. The rumor of Kanye West performing turned out to be untrue, and so Plein pivoted to 18-year-old American rapper Lil Pump, nee Gazzy Garcia, as his act, who took the stage post-show with Smokepurpp and Maluma.

Guests included Bella Thorne, Paris Hilton (a longtime Plein supporter), EJ Johnson, Andrew Warren, Billy Porter, Jonathan Cheban and more. Johnson and Warren schmoozed by the bar in The Grill room ahead of the show before taking their seats. Around him, guests in sequined gowns and floor-grazing furs collected martinis and Champagne. Porter, who has been a frequent face this NYFW thanks to his official role as NYFW: Men’s ambassador, sat engaged captive throughout both the Billionaire and Philipp Plein shows, ever the loyal supporter.

Mickey Rourke was the night’s big VIP; the actor closed the Billionaire show with his beloved Pomeranian on a leash at his feet. Immediately after his runway turn, Rourke and Plein made the rounds to pose with admirers, as Rourke’s assistant scooped up his dog and walked him through the room. Between shows, jazz band Lapis Luna took to the stage for some mid-course entertainment.

“Everybody please grab a drink, take a girl and take a seat,” Plein instructed the crowd, before presenting the Plein collection on the likes of Austin Mahone, Lil Skies and Martha Hunt.

Lil Pump took the stage with Smokepurpp after the finale, as Plein walked through the room with Colombian singer Maluma on his arm, in a fluorescent green jacket.

The night came to a close with Lil Pump serenading the crowd with his hit with Kanye West, “I Love It,” perhaps a tribute to the would-be Plein performer. “You’re such a f–kin’ ho,” he told the crowd, as they swayed along. “I love it.”