Midland on Creating a Brand, On Stage and Off

The country music trio has a distinct retro style in both their fashion and their music.

Midland has been a little different ever since they emerged on the music scene three years ago.

In an era when bro-country was all the rage, the trio from Austin, Tex., sounded more like Dwight Yoakam than Florida Georgia Line.

And the country music community took notice. Their first single, “Drinkin’ Problem,” a throwback song rife with steel guitars, hit number one, was certified gold and earned the group a Grammy nomination. They were named New Vocal Group of the Year at the 2017 Academy of Country Music Awards and soon found themselves opening for such high-powered acts as George Strait and Tim McGraw. 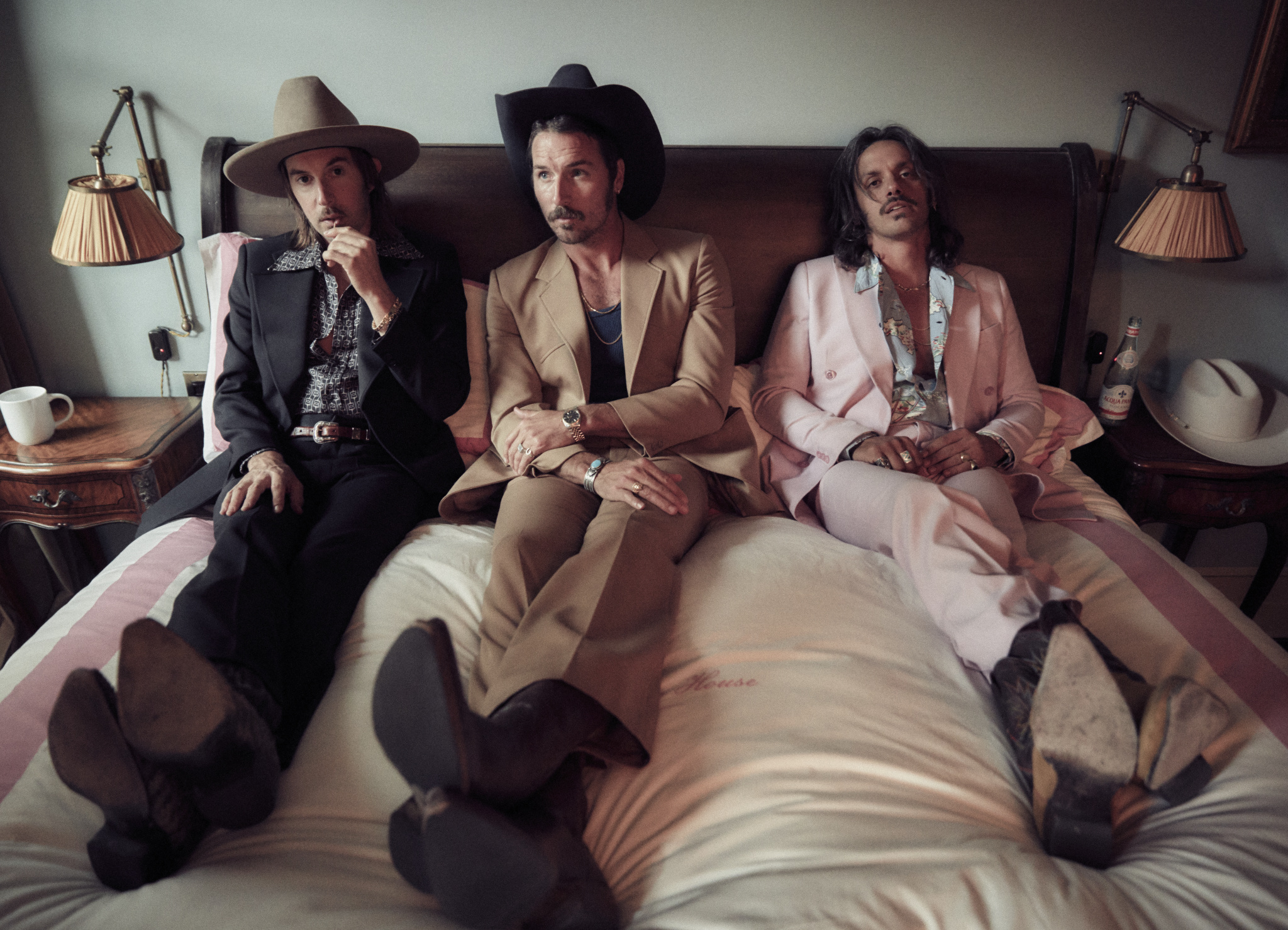 As their musical star rose, they started getting noticed for their style as well. While most of the male singers in country music still opt for graphic Ts, jeans and baseball caps, Midland leaned more toward vintage silk shirts, stretch pants from the Seventies, Nudie-style embroidered suits that would make Porter Waggoner proud, distressed denim jeans, bolo ties, cowboy hats and gold chains.

Their look has even caught the attention of the mainstream fashion media including Esquire, which took the trio vintage shopping when they visited New York to appear on the “Tonight Show With Jimmy Fallon” last month.

Their ability to not only chart country songs but also create a brand shouldn’t be surprising considering their history. Bassist Cameron Duddy was a successful music video producer, working with artists including Bruno Mars and Britney Spears. His wife is photographer Harper Smith, who shot the images for this story. Lead singer Mark Wystrach was an actor and model and is now engaged to Outdoor Voices founder Ty Haney. And guitarist Jess Carson, now a father of three, owned a vintage store in Portland, Ore.

In their first photo shoot with WWD in 2017, they wore head-to-toe denim, cowboy hats and boots, and happily jumped onto the carousel at Bryant Park for their photo shoot. “We rather enjoyed that carousel,” Duddy said with a laugh.

But now, they’re more often found on international flights and fancy tour buses as they prepare for their headlining tour that kicks off next month in support of the release of their second album, “Let It Roll,” on Friday.

On the cover of the album, they’re sitting on the hood of a 1989 pink Lincoln sedan — complete with bull horns mounted on the front — wearing Seventies-inspired suits and wide-brimmed cowboy hats.

“We still wear Wranglers and stuff like that,” Duddy said over tea at an East Village restaurant on a hot summer afternoon. “On occasion we’ll wear denim on denim. There are certain scenarios when you just can’t go out on stage in a rhinestone jacket, and there are certain places where you just want to wear a T-shirt and jeans.”

Carson added of the rhinestone suits: “They weigh a lot and they don’t breathe.”

Wystrach said: “Our wardrobe kind of ebbs and flows. In the summer, you just throw on a tank top and it’s much more breathable.”

“As our style evolves, we’re less interested in being boxed into what a Midland look is,” Duddy continued. “All three of us just appreciate design and aesthetic the same we appreciate music. It’s a presentation the same way you’re presenting your music. It takes thought, but it also takes that intuitive sense.” 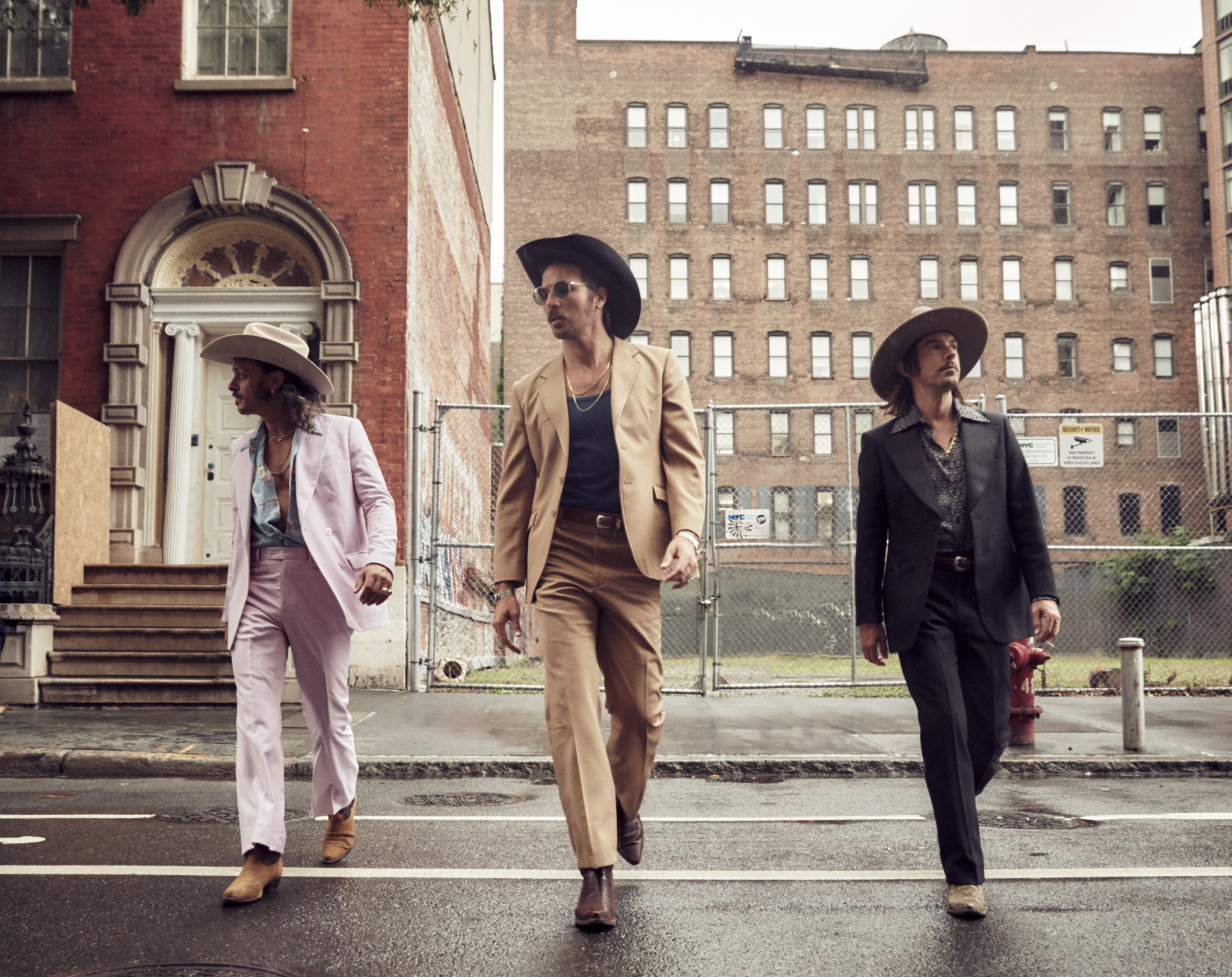 Wystrach added: “All of our stuff is rooted in rather classic designs and then taking different chances. A lot of it is different combinations and taking something and making a slight tweak to it to make it unique. We’ll always wear Wrangler. A great worn-in pair of Wranglers and comfortable boots is something you can wear anywhere all the time and feel good. It’s practical and looks good.”

Duddy said he was recently looking through some old photos and was amazed at how their look has evolved over the past couple of years.

“The difference between back then and now is that we can afford more things,” Wystrach said. “Back then, our fashion sense was really based on the challenge of not having money, the aesthetic was derived from necessity and lack of resources.”

Carson said: “When we first started, it was very throwback, late Sixties, country through the filter of Laurel Canyon. We wore a lot of denim on denim and cowboy hats and boots. We still had long hair. We’re by no means rich but we have access to some nicer things now. We didn’t make a dime for two and a half years.”

But now that they’ve got a little jangle in their pockets, they’re able to step out a bit.

“The bar has been set so low in country music, we’re going to stand out and look good in terms of what’s fashionable on stage in Nashville,” Duddy said. “But we were definitely ahead of the curve wearing thin button-up patterned shirts tucked into pleated dress pants, and gold chains. There were a lot of things we were doing that looked far out in Nashville and made people said, ‘What the f–k is this?’ They were laughing at us when we came out wearing Nudie suits on our album cover. Now it’s really groovy to wear that stuff.”

He recalls that while they were out touring for their first album, other artists would be bewildered when they showed up at an arena at 8 in the morning wearing vintage suits. “We’d roll in in our s–t, and they’re like: ‘You wear this all the time? And they’re in their sweatpants. We’re like: ‘This is what we wear,’” Duddy said.

And their look is very on trend. 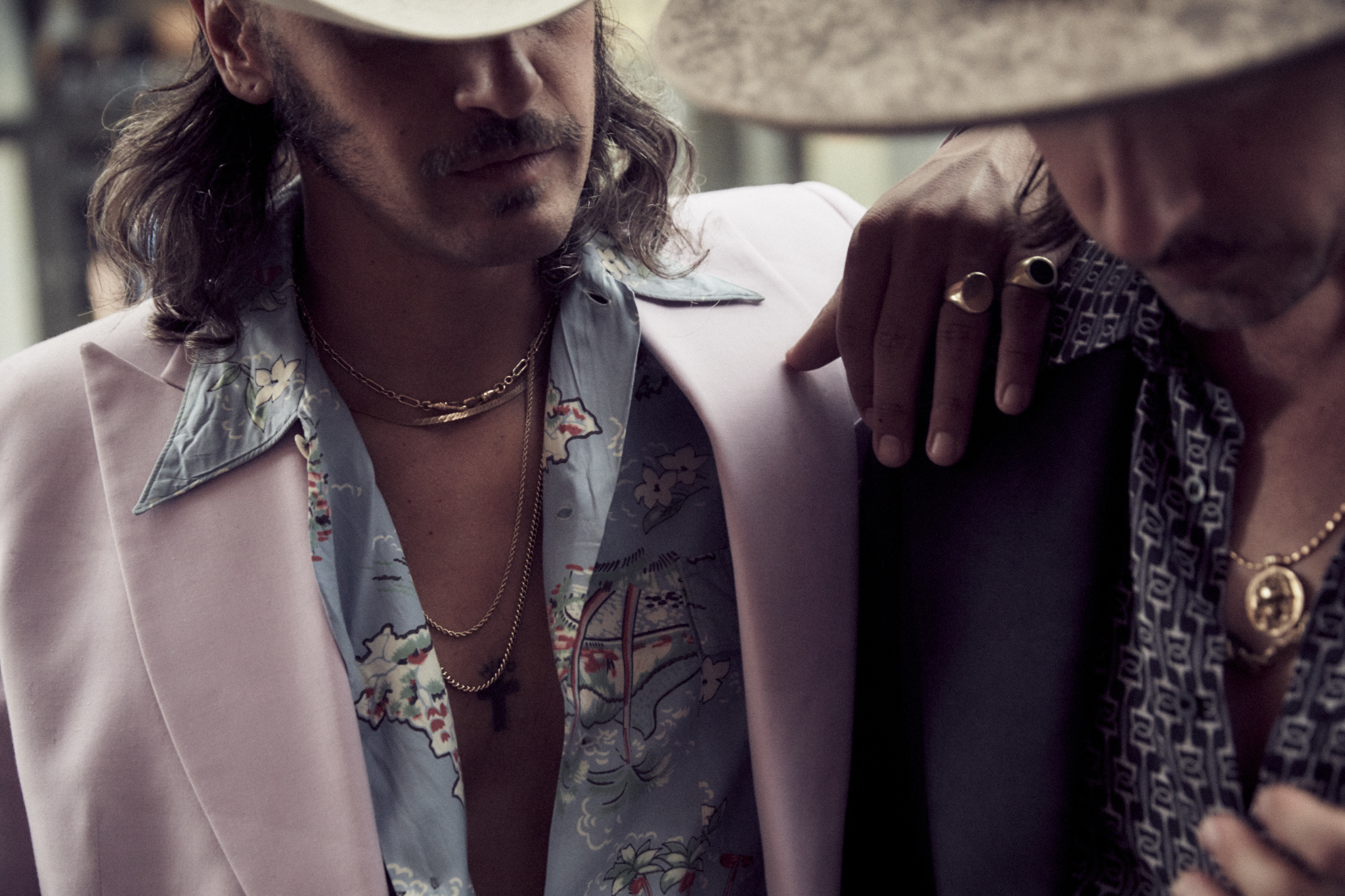 “The country guys were the first to be dripping gold and wearing bedazzled shit,” Duddy said. “Rhinestone suits are now super in vogue.”

He pointed in particular to Diplo, who he said completely ripped off the suit he had made for the cover of the first album, “On the Rocks.” “He went to my suitmaker and said, ‘Make me Cam’s suit.’”

The suit was made by their custom tailor, Kathie Sever of Fort Lonesome, in Austin, one of their go-to design sources along with Standard Hat Works in Waco, Tex., and Heritage Boots in Austin. “All very Texas-centric stuff,” Carson said.

The trio doesn’t work with a stylist and enjoys putting together their own wardrobe.

Wystrach said: “Everything we wear is intentional. It’s not just throwing on every piece of jewelry that you have. Every piece means something and matches the aesthetic. You can wear gold and silver together as long as there’s some theory behind it. It’s not about money, it’s not about having a custom tailor, it’s about how it all fits together.”

And it doesn’t hurt that they’ve traveled the world and seen how the other half lives.

Wystrach said: “As you go and experience more things and more people, you’re exposed to more things. We tour around the world now. We’re going back to Europe for our third and fourth times. We come to New York a lot and we go to London, you see different things and get inspired. Back in the day, we were just going to honky-tonks and bars. Now, we’re also around artists much more often. When you go to L.A. for the Grammys, you see other people and you take cues and elements that speak to you.”

Duddy summed it up this way: “We’re just dressing how our music is right now. It might sound kind of heady, but it’s true. It’s not a conversation, it’s more of a slow-changing thing. One guy will wear something and then in another week, the two other guys will have two other versions of it.”

Wystrach said: “We take cues from other artists and from each other, too. It just naturally happens, we don’t sit down as a band and say, ‘OK guys, we need to change this.’ But we definitely have conversations before going out on stage. No one wants to be the guy in rhinestones if the other guys are in T-shirts.”

But they also know that they can’t go too far.

“You should never feel like a parody,” Duddy said. “There’s a fine line between dressing like you’re going to an Eighties-themed party and looking like Midland.”

The diversity of their looks is similar to the eclectic mix of music on the new album — everything from the dancehall anthem, “Mr. Lonely,” to the requisite drinking and cheating songs: “Every Song Is a Drinking Song,” “Cheatin’ by the Rules” and “Cheatin’ Songs.” There’s “Playboys,” which Wystrach described as an “intelligently crafted modern country song,” and the soulful “Put the Hurt on Me.”

“Even if it’s Jess or Cameron doing the leads on it, you know it’s a Midland song,” he said. “The same thing goes for our style. OK, that look makes sense, that’s Midland.”

And there’s no denying that they’re making their mark, both in music and in fashion.

“What trips me out is seeing kids walking around wearing pleated Wrangler rancher polyester pants with a belt, a tight T-shirt and a tall crown hat, with a mustache and gold chain,” Wystrach said. “And you’re like, Oh my God, there’s no other reference than they’re listening to Midland.”