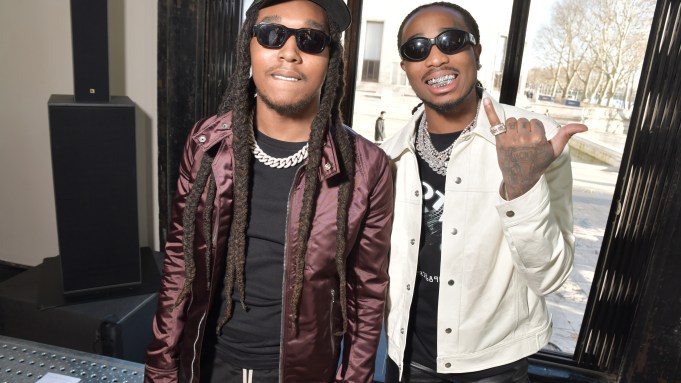 MIGOS HIT THE SHOWS: Minutes before the Rick Owens show on Thursday, Quavo and Takeoff, two of the three members of hip-hop group Migos, gave the designer the highest praise ever.

“Rick is the GOAT,” said Takeoff, using an acronym meaning “greatest of all time.” “He’s one of the best out there. He’s different.”

The pair met Owens at a previous Met Gala, and remember him by his sky-high shoes — renditions of which were presented on the runway that day, in towering plexiglass versions.

Had they ever been tempted to wear heels that high?

“My life is already high,” quipped Quavo, laughing at the double entendre. The pair was effectively surrounded by a cloud of smoke.

Next up for Migos is “Culture III,” the trio’s next studio album.

Asked about a release date, the pair remained evasive. “It’s in the process, and you’ve got to trust the process,” Takeoff said.

“It’s coming,” stressed Takeoff, before they headed over to greet artist Michèle Lamy, who is also Owens’ wife, and took their seat front row alongside DJ Honey Dijon and artist Takashi Murakami.