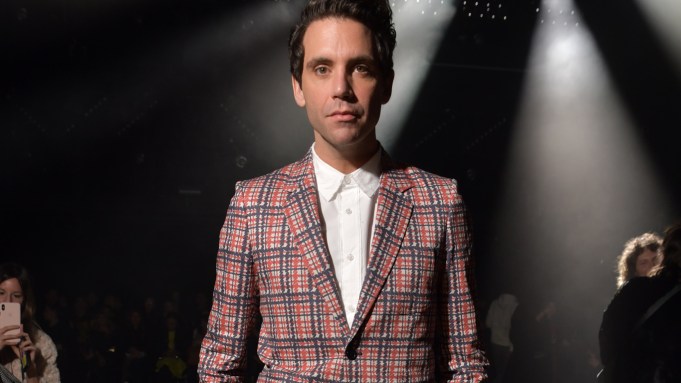 PRIVATE LESSONS: Mika is a bit of a polyglot.

The French-Lebanese singer and former jury member on France’s “The Voice” edition is fluent in both French and English, and can also speak Spanish and Italian.

“When I’m happy, the language that comes to me naturally is French,” he said, sitting front row at the Viktor & Rolf couture show on Tuesday. “When I’m mad or extremely concentrated, I speak English. And I always write songs in English.”

The singer, who is on a world tour and will be releasing a new EP this spring, reminisced about his one-of-a-kind Italian lessons.

“I held this sort of audition where I went looking for the best Italian teachers around, and a Sicilian woman turned up on my doorstep,” he recalled. “It was her first day in Britain and she had never left Italy. She didn’t speak a word of English. I hired her in 30 minutes.”

His new teacher then joined him on his world tour, during which they spoke Italian together “from the morning coffee to the evening whisky,” he said. What’s the first word he remembers learning?