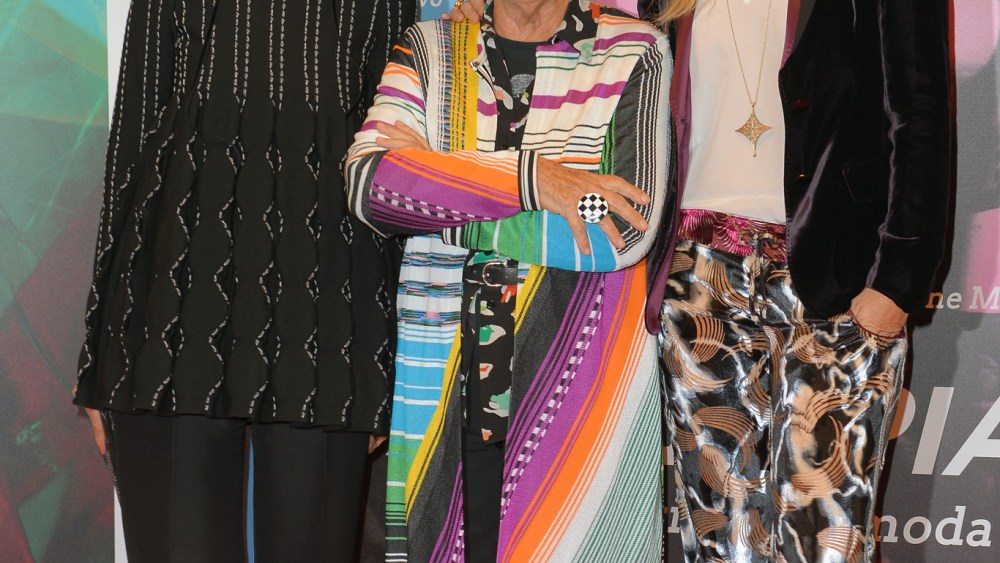 MILAN — You could never have missed Anna Piaggi, with her eye-catching, flamboyant and eccentric style, from her veiled hats down to her cuissardes boots. The screening of the film on the late fashion editor on Saturday evening was an opportunity for her friends to reminisce about her personality, quirks and sense of humor, as well as her talent as a fashion journalist, and for those who knew her less to find out more about her.

Jeremy Scott, for one, said Piaggi was “such an inspiration,” and he felt “fortunate enough to have met her and seen her on several occasions,” but he remarked that it was “interesting to see the vintage footage. The more people that have access to her the better.”

Alina Marazzi, the director of the documentary “Anna Piaggi: A Visionary in Fashion,” which kicked off the third edition of the Fashion Film Festival Milano, did not know the editor personally. “After her death in 2012, I saw the warehouse where this incredible world of 2,000 pieces of clothing and 900 hats were stocked away,” marveled Marazzi. “It was Alice’s mirror, and I was curious to learn more about her. I ended up realizing how cultured she was on so many different fronts, from the theater to the arts, and what deep knowledge she had of fashion.”

Piaggi’s longtime friend Rosita Missoni lamented that her wardrobe “has not been taken into consideration [for exhibitions]. Not enough has been done to remember her. She was an icon, one-of-a-kind and unrepeatable. She was proud but generous, sophisticated but never superficial, and she had an acute sense of humor.”

Missoni remembered when Piaggi, working for the now-defunct Arianna magazine, discovered the brand, which was then called “Jolly,” at La Rinascente department store and helped launch it globally. Piaggi and Missoni would spend their holidays together with their respective husbands, photographer Alfa Castaldi and Tai Missoni, who also became fast friends. In the film, the late Tai Missoni recounted how they would all go sailing off the coast of Dalmatia, now part of Croatia and Montenegro.

“Anna couldn’t wait to go looking for flea markets and I remember when she once found this vintage [Croatian] cross-stitched wedding gown that she then proudly paraded on the boat.”

Manolo Blahnik concurred with Rosita Missoni. “The city of Milan should do something for a woman who did so much and who helped so many people,” he said on the red carpet ahead of the screening. “She was the guiding light of my creativity — if you want to say that…I’m just a cobbler,” he said later on the theater’s stage before the screening, soliciting a round of laughter. “Someone should do something about Anna, a friend of 45 years. People have short memories, but she brought Made in Italy around the world.”

Another close friend, milliner Stephen Jones, said, “It’s crazy how she was more famous all over the world, even more than in Italy.” Wearing a T-shirt reproducing Piaggi’s image, designed by Michael Roberts and Franca Sozzani, he said, “Anna is here.

“We first met when she was supposed to do a story on shoes and Manolo in London, but then she saw my hats and it became a shoe and hats story. We had an amazing friendship through our love for hats. If I didn’t make hats, I don’t know if she would have been interested,” he said self-effacingly. He also remarked on Piaggi’s own unique take on his designs. “I would send her sketches by fax and then she would wear the hats upside down or the other way around and make them her own. She would wear [designer] labels but the [looks] were hers.”

In the 50-minute film, Piaggi’s footage is mixed with comments from the likes of photographer Bill Cunningham, Jean-Charles de Castelbajac and Karl Lagerfeld, who created the “Egotrip” dress for Fendi, which reproduced the image of his face near that of the editor’s. “She was my muse,” Lagerfeld said in one clip.

“She was my mentor,” echoed Carla Sozzani. “Conversely to what people think, she was very practical. And she taught me to be free and to have no fear.”

Flanked by her husband Kean, Constanza Cavalli Etro, who established the Fashion Film Festival Milano, said Piaggi was “brave and innovative, and starting this edition with a film on Piaggi is [symbolic]. We also want to be like her, take risks and be inclusive, blending fashion shows with art and cinema, in a transversal way, like she was, without barriers. For this edition, 700 films were submitted and 180 were selected, it’s all free and this allows artists to express themselves.”