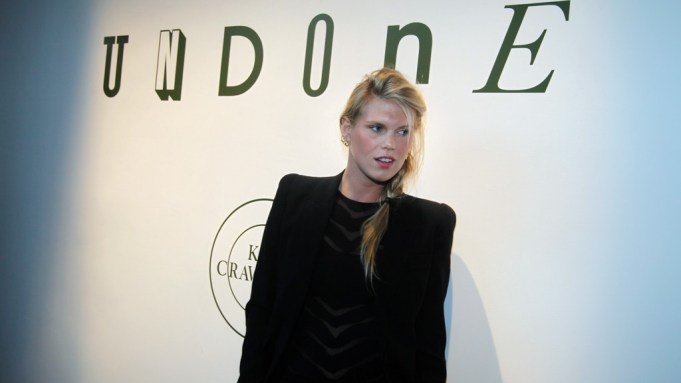 Behind the scenes was the scene at Undone, a party held Thursday night by Kim Crawford Wines and fashion photographer Miles Aldridge. The fete afforded partygoers both a unique glimpse into what goes into shooting an advertising campaign, and the opportunity to join in on the action.

“The idea,” explained Aldridge, “is to hopefully capture spontaneous inspiration from people who aren’t necessarily used to modeling.”

Aldridge is no stranger to shoot-at-the-hip-style photography. He shot Jean Paul Gaultier’s spring campaign live from the runway.

Upon entry into Cedar Lake Gallery in Chelsea, revelers were immersed in a spread of different sets that had been built by Aldridge’s crew. One, a pigment-rich kitchen worthy of Pedro Almodóvar, had a wind machine blowing palm fronds outside the window, to mimic stormy weather. Another, a sort of hot pink Marie Antoinette-inspired parlor scene, was replete with a trio decked out in puffy powdered-white wigs; one man pushed a woman in a rope swing while another, dressed in formal livery, stood behind a picture frame cut out of the wall, pouring glasses of red wine.

Some revelers were invited to participate in the scenes: to whisper together in the kitchen as a leggy model in an evening gown prowled with a tray of wine glasses or to lounge on the furniture as the model in the swing was pushed to and fro. The resulting shots were displayed on large monitors throughout the space.

There was also a sort of mystical woods-themed nook in the room, where a bevy of models in flimsy dresses wore floral garlands and peeped out of holes carved in a faux tree trunk as partygoers sat at wooden bistro tables to sample the wines. One model wore a costume intended to make his lower hemisphere look like that of a goat.

“They’re not the most comfortable, no,” the satyr said of his feet, which were clad in hooflike shoes reminiscent of Alexander McQueen’s “armadillo” heels. “But it does sort of make me walk like I’m half animal, so I guess it works, right?”

On the opposite side of the space, Ladyfag and Erickatoure Aviance lounged on a selection of patent-leather couches and posed for photographs unrelated to the campaign.

Alexandra Richards DJed in a far corner, raised above the action. Was she thinking about getting involved in one of the shoots?

Aldridge kept a steady watch over the work at hand as the party progressed. He, his monitor and a clutch of assistants were separated from most party traffic by a thin black rope. “There’s something Kafkaesque about it,” the photographer noted of the party. “It’s dreamlike and nightmarish, having a photo shoot in public and everyone behind you is a potential model. A mixture of Kafka and Fellini…anxiety and glamour.”

And the magical woodland creatures?

“The goat-man and the girl in the tree were not my idea,” he said, “but I kind of like it. It’s very ‘Lord of the Rings,’ or something.” He pointed at one of the scenes as it came up on the monitor: “It’s quite mad, isn’t it? But it’s working.”