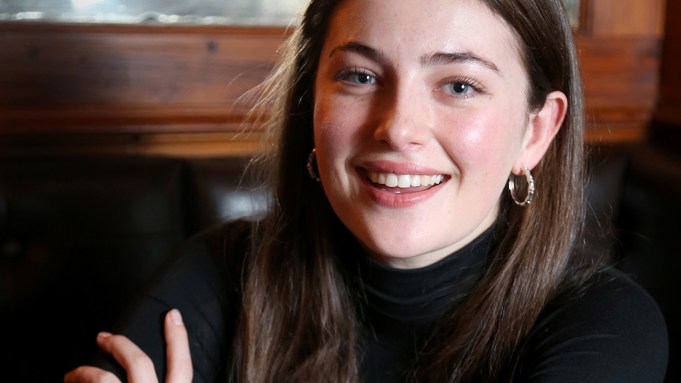 As it tends to go for a breakout actor, this past year has been full of firsts for 21-year-old Millie Brady. There was her first fashion show (front row at  — and decked in — Miu Miu), her first brand campaign (Miu Miu again, naturally) and, coming Feb. 5, the release of her first feature film, “Pride and Prejudice and Zombies.” The latter has the English actress feeling nostalgic. “It’s my first project, so I’m just very sentimental about it,” she says. “That sounds weird to say about a zombie film!”

“Pride and Prejudice and Zombies” is, as the title suggests, is based on the beloved Jane Austen tale, with the added twist of a zombie apocalypse. “I don’t know how, but it does work,” Brady says.

Brady landed the role after an adolescence spent pining for her big break. “I’ve had a lot of knockbacks,” she says on a recent chilly morning over English breakfast tea at Locanda Verde in TriBeCa. “But I know what I want to do and I know that I can do it.”

As a child, her family moved around a lot in England “just because we got bored easily,” but she credits most of her growing up to a boarding school in Ascot, where she was from ages 11 to 18. Nowadays she shares a flat in Hampstead, North London, with her older sister, who works in finance. “When we get back in the evening there’s no talk about work or anything like that,” Brady says. “Just sisters catching up.”

She began acting at a young age, and by the time she was a teenager she was holing up in her room, penning letters to agents. “My mum couldn’t work out what I was doing in my room,” she says.

This was — shockingly — met with success, and she was signed while she was still in school. “At that age you’re so naive — I never thought for a second, ‘Oh, I’m not going to get signed,’” she says. “So I went in and sent all these DVDs of me acting. It’s so funny now looking back on it — I’m like ‘God, you were a cocky 15-year-old.”

“Pride and Prejudice and Zombies” is a cheeky adaptation of the prim literary classic and is chock-full of English heartthrobs: Lily James, Suki Waterhouse, Sam Riley, Bella Heathcote, Douglas Booth and Jack Huston.

“The girls are all trained in martial arts, and they are basically the heroines of the book,” Brady explains of the reimagined Bennett sisters. She plays Mary, the middle of the five girls and one who has “always been the kind of nerdy, bookworm sister,” she says. But in the “Zombies” iteration, “she gets to come into her own a bit. She’s not shying away into the corner, she’s getting down and fighting these zombies.”

After “Zombies” she’ll head back further in time, to another retelling of a literary classic, for Guy Ritchie’s “Knights of the Roundtable: King Arthur” epic, out in July. She stars as Jude Law’s daughter, a character she describes as “off-the-chain nuts.” It was only her second film and her first big-budget blockbuster. “They built this life-sized castle in nine months,” she says. “I went on set and was just like, ‘Oh my gosh, this is ridiculous.’”

She recently took a break from film sets and spent a week in New York shooting Miu Miu’s latest campaign, after the brand had invited her to sit front row at its show in September. “They were like, ‘Does Millie fancy going to Paris?’” It was, one would imagine, an easy “yes.”

Brady has some experience with modeling. During summer holidays from school, she worked a bit as a model to save money for acting. “I knew that in the long run what I wanted to do was act, but in order to do that I was going to have to be living in London, if I wanted do it full force,” she says. “I couldn’t be living in the middle of Hampshire with my mum.”

Though she is no longer working as a model — save for when Miu Miu calls — she found it beneficial to her career,  “because it did make me comfortable in front of the camera from a young age and it means that now I can live in London from the savings I made from being a 16-year-old and having been a bit savvy.”

Fashion is still part of her life, and comes in handy when prepping for roles. “For auditions, if it’s a period piece, I’ll always make a nod to the era,” she says, noting that she frequently goes up for such roles due to her “Old English face.” “I’ll put my hair up on the sides and wear a lace blouse or something.” The Miu Miu gig, then, is not a complete departure from the creative process as an actor. “I think fashion does come a lot into what I do,” she says. “So it’s nice to be doing both of them.”

Case in point: her Old English face looks quite at home mugging for the brand one minute and zombie-slaying the next. Contemplating the movie, Brady sets her tea down. “Well,” she smiles. “Jane Austen’s probably tossing in her grave.”