The Milwaukee Brewers slugger hired a stylist to help him up his fashion game for the big event.

Christian Yelich at the fitting for his red carpet appearance on Tuesday.

Christian Yelich may have a back injury that forced him to bow out of Monday night’s Home Run Derby, but that isn’t stopping him from walking the red carpet before the Major League Baseball All-Star Game in Cleveland tonight where he’s still hoping to play.

Yelich, the Milwaukee Brewers’ star left fielder, who is the reigning National League MVP and leads the majors with 31 home runs and a .707 slugging percentage, will be sporting a Dior Men navy suit for the big night.

Baseball players have not historically been known for their personal style — and the league has no formal dress code — but a few of the younger guys, including Yelich, are looking to change that.

Megan Wilson, a New York-based designer, stylist and creative consultant who works with a number of professional athletes in the NBA and NFL, said a contact at MLB reached out to her after a few of the players expressed interest in “looking a little more elevated and professional” for the All-Star Game. Because of Wilson’s work with other athletes, connecting her with Yelich seemed like a natural fit.

Before meeting him in person, Wilson did her homework, researching what the 27-year-old, 6-foot-3-inch Yelich had worn in the past and his personal preferences.

“He’s a California kid so wore a lot of Converse, jeans and T-shirts,” she said. So she knew that whatever she selected for him would have to be comfortable and “not make him feel like he’s wearing a costume.”

At the same time, Yelich has been active in charity initiatives for the California wildfire victims, so Wilson sought brands that would speak to this passion as well.

She also looked back at the past red carpets for the All-Star Game and saw that some players wore sweatpants while others, like slugger Bryce Harper, were over the top. Last year, Harper wore a red, white and blue windowpane suit with a vivid American-themed lining. “It was all over the place,” she said.

Wilson pulled some looks for Yelich — some business casual and others more formal — and met with him over the Fourth of July holiday weekend. “The first look I pulled I just had a good feeling about, and he loved it, too.” 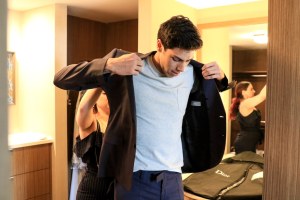 Christian Yelich will wear a Tact & Stone T-shirt under the suit.

That’s the look he’ll wear on the red carpet: the navy Dior Men suit with burgundy and black undertones that “will look good on camera,” Wilson said. “It’s also lightweight and comfortable. It’s really hot in Cleveland so we don’t want him to get too sweaty.”

Under the suit jacket, he’ll wear a T-shirt from Tact & Stone, a sustainable men’s brand based in Los Angeles. The pants will be “slightly cropped so you can see the shoe,” she said, adding that he’ll be wearing Dior low-top sneakers that are slightly translucent so his aqua blue Stance socks show through. He’ll top it off with an Indochino pocket square. 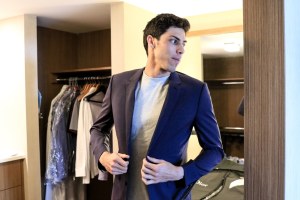 “We went with brands that help him become his best self,” she said. “I pushed him a little bit, but he’ll still be comfortable.”

She said Yelich’s mother was quite excited to see him working with a professional stylist. “She’d been dropping subtle hints, but she has an ally now,” Wilson said.

Wilson said it was also fun to work with an athlete who was a more traditional size. “He wears a size 11 1/2 shoe, not a 16,” she said, adding that a lot of her sports clients are “giant-size, but Christian is a little bigger than a showroom sample.”

Once Yelich walks the red carpet later today, Wilson hopes that more professional baseball players will take note and follow in his footsteps. “We’re hoping to bring more fashion into the fold,” she said, “especially for the younger guys.” They look at the other leagues, particularly the NBA, and want their sport to have a similar aesthetic.

Wilson said players like Yelich and Harper “understand they’re more than just athletes,” she added. They’re active on social media and promote themselves as ambassadors of the sport.

“MLB crushes it on social and there’s so much merchandise out there so there’s definitely an opportunity,” she said. “This is the next step in the evolution for the league and the red carpet is a good place to start.”