“Kajillionaire” has taken on a new identity: it’s Miranda July’s pandemic movie. (At least, she hopes — maybe it’s the first of many pandemic movies.) After she moved past the initial disappointment around the film’s trajectory — the movie was first slated for a theatrical release in June — she was able to connect with the film’s new context, and appreciate what viewers have been able to pick from the plot.

“So many people have described it in terms of the pandemic — their loneliness, how intense touch is when you haven’t been touched, surviving ‘the big one.’ I have just come to own that,” says July, who wrote and directed the film. “Not to be completely magical thinking about it, but the reality is that this movie ended up coming out now.”

The off-kilter comedic film, which premiered at Sundance in January, follows a grifter family in Los Angeles who subsist on pulling off low-level scams and cons with creative agility. It’s also a movie about connection and affection, or in the case of the central character — emotionally stunted 26-year-old Old Dolio, played by Evan Rachel Wood — the lack thereof. July rounded out the family casting with Richard Jenkins and Debra Winger. 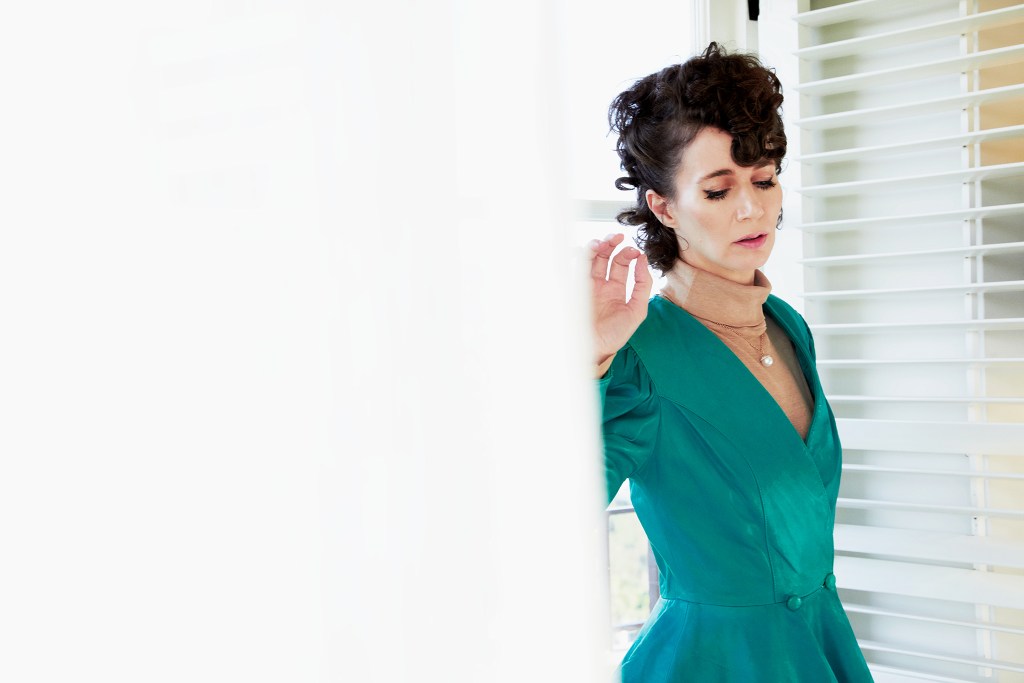 July alternates between creative mediums: after she writes a novel, she wants the release (and collaboration) of making a movie. “I wish this was a more avant-garde answer, but the truth is, from the second I finish a book, I’m hungry and waiting for a movie idea,” she says. Which is how the characters of “Kajillionaire” became destined for the screen. July woke one morning with the image of an off-kilter family of three formed in her head: she saw the two women, a mother and daughter, with long, long hair, and the scraggly dominance of a husband and father. And then July saw the characters within a scene: the three of them at a baggage carousel in the airport, in the middle of executing a small-scale luggage scam.

“The idea of family members pretending to not know each other in public was really painful, and struck something in me,” says July. “I knew the story of how you got to that point. And what happened from that point was a movie.”

Through decades of creative pursuit that spans a brief musical stint in the riot grrrl scene, mixed-media performance projects, experimental and indie filmmaking and creative writing, July has cultivated friendships with people who take a similar subversive approach to art-making. Two of those friends led her to the movie’s leads — Carrie Brownstein introduced July to Wood over text, and Lena Dunham suggested Gina Rodriguez to play the family interloper and influence character. 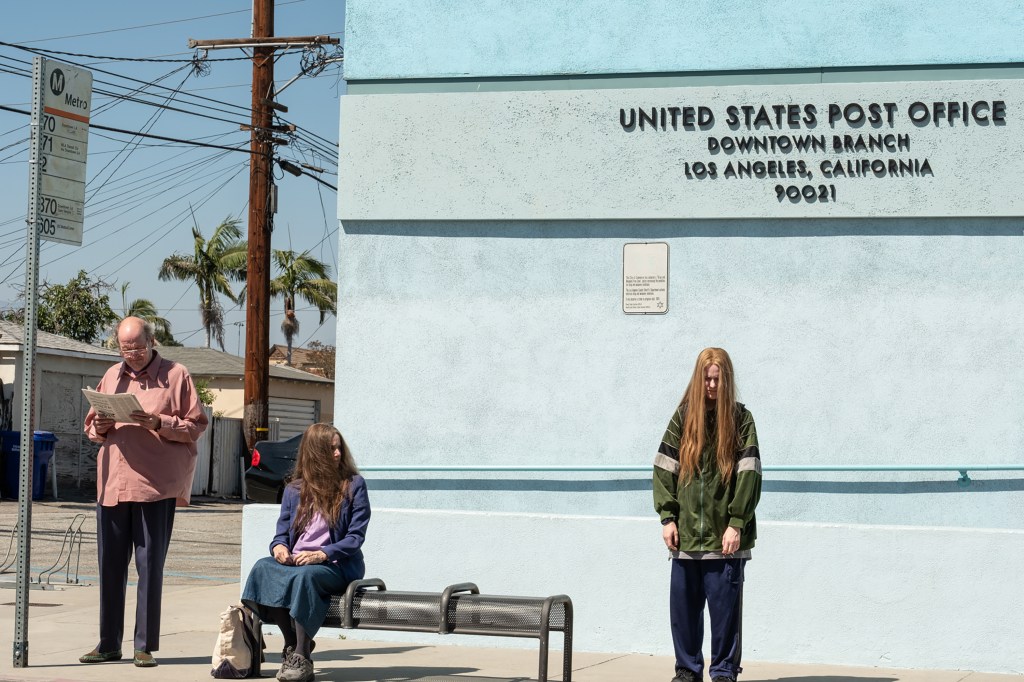 A still from the film.  Courtesy of Matt Kennedy / Focus Features

July first met Wood over dinner, and looked for a sign that Old Dolio was dormant inside of the actress. “By the end of that dinner, I was kind of giddy,” says July, who also uncovered one of Wood’s secrets: the actress has a deep, lower voice — her original voice, perfect for Old Dolio. The pair crafted the nuanced physicality of Old Dolio over the course of intense explorative exercises, which involved Wood crawling around July’s home, “like a creature.” In Wood’s own words, she was in heaven. “At the time as the director, you’re like, is this entirely too weird?” July says of the process. “But an actor wants to go out on a limb. That’s the whole point.”

Cheap rent in L.A. can be hard to land, and July needed to find somewhere for the family to live on a scrappy budget. Her answer to that conundrum was housing them at the industrial Bubbles Inc., where their space routinely floods with voluptuous, Sisyphean pink foam. The foam was also her answer to what she thought the movie needed: more beauty. By the end of the film the foam is also a metaphor for coming-of-age and transformation.

July settled on the precarious age of 26 for Old Dolio, too old to be still living at home with your parents, but not old enough to be truly problematic. Like her characters, July engaged in resourceful griftiness as a twentysomething herself, documented in her mid-career monograph coffee table book “Miranda July,” released earlier this year. The book traces the artist’s early scrappy creative pursuits through current projects, interweaving archival images and documents with vignettes from July’s various friends and collaborators. In her 20s, July ran Big Miss Moviola/Joanie 4 Jackie, an “underground distribution network” (akin to a VHS chain letter) for female filmmakers. Roseanne Barr’s talk show sent July a FedEx number so she could send in some tapes, and afterward July just continued using it.

“You’re 26 and you have a FedEx number: it’s like gold,” she says. “It’s kind of like, this is a small grant from Roseanne Barr to women filmmakers, you know?” 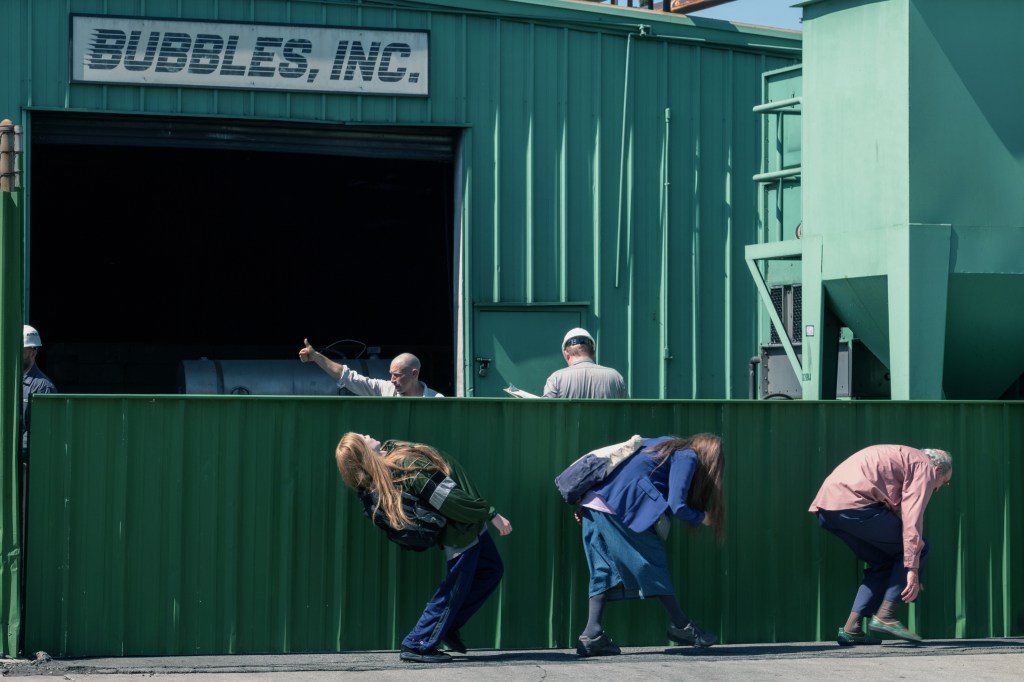 A still from “Kajillionaire.”  Courtesy of Matt Kennedy / Focus Features

In the opening interview of her monograph, July acknowledges money as a conduit — for power, for anxiety, for emotion. “The moment I left home I approached the world with a thief’s mind-set,” she offers in the book. Despite her success and celebrity, July is not, in fact, a kajllionaire, or even a millionaire. In a recent profile in New York magazine, the details of July’s personal bank account are revealed: she only has $2,000. (Well, at least until the next installment of her book advance arrives.)

When July posted a public thank-you lauding the author on Instagram, the niche media subsection of Twittersphere was abuzz. Should it be considered a win for the subject of a celebrity profile to respond so gushingly to what was written about them? There’s a sense that the conversation was stoked partially because of who the subject was — July is a divisive figure, and it might have been a circumventive way for twee-haters to hate. But more interesting to consider is that tension around false connection and power imbalance has been central to July’s work from her early performance art days — elements also typically at play between a journalist and subject. While hours and decades of proximity create opportunity to go deep, July has been just as likely to create lasting, deep connection from fleeting interactions: one Uber ride, with driver Oumarou Idrissa, led to an eventual art collaboration. Most riders would have given a five-star rating and moved on. Plus, she’s explored the dynamic of making typically private communication public; in her 2013 project “We Think Alone,” she pulled uncensored personal e-mails from the sent folders of famous-ish friends and sent them to a listserve.

“It made me laugh to think that people thought I enjoyed it, or there was this lovefest between us or something,” she says of the profile. “It was totally uncomfortable for me. It is to this day, the entire process,” July adds of being profiled. “I was very, very nervous. And then when I read it, I was like, oh f–k. Like, my bank account balance, my relationship with my parents — as of now the jury’s still out on that relationship post that article.”

What she appreciated was that it got to the heart of the matter: the messiness and imperfection of relationships with parents and relationships with her own identity as a mother, a wife, an artist. “If I was honest or talking with a therapist or friend, those issues really are central, and they’re totally uncomfortable and up in the air,” she says. Similarly, July found the process of sifting through her past work for her monograph uncomfortable — akin to reading an old journal. But by doing so, she also found new understanding and empathy for her younger self. 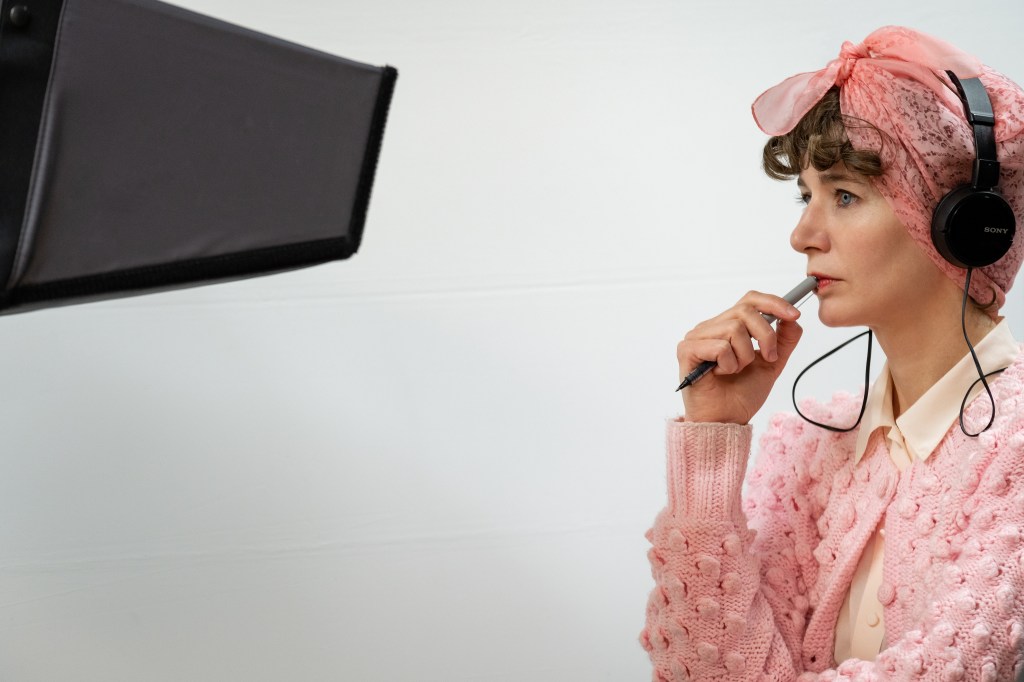 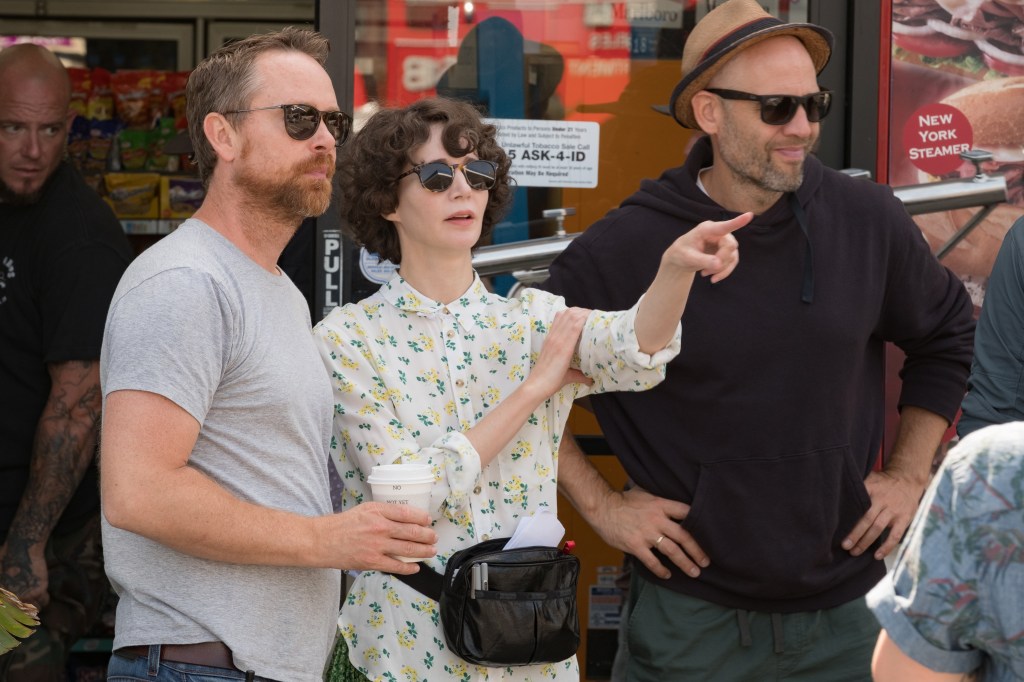 “Kajillionaire” is being released in theaters, although not everywhere. (It is a pandemic film, after all.) “Only you know what watching a movie on the big screen means to you; it’s a personal thing. Needless to say, me, and Evan, and the entire cast and crew would be extremely honored by your attendance, but it won’t be safe for everyone or everywhere,” July wrote on Instagram in early September.

July won’t be watching her film in theaters — she never rewatches her movies after the premiere — and she couldn’t even if she wanted to; movie theaters in L.A. have yet to reopen. But she desperately wants to see a movie, any movie, in a theater. Like everyone else, she misses the escape.

“It really is like not having to exist for a couple hours, but in the highest sense — not in the zoning out on Instagram sense, but in the put yourself in someone else’s hands [sense],” she says. “And to do that among people in a space that is just for that, that doesn’t have any other distractions — I mean, it was built to be kind of holy.” 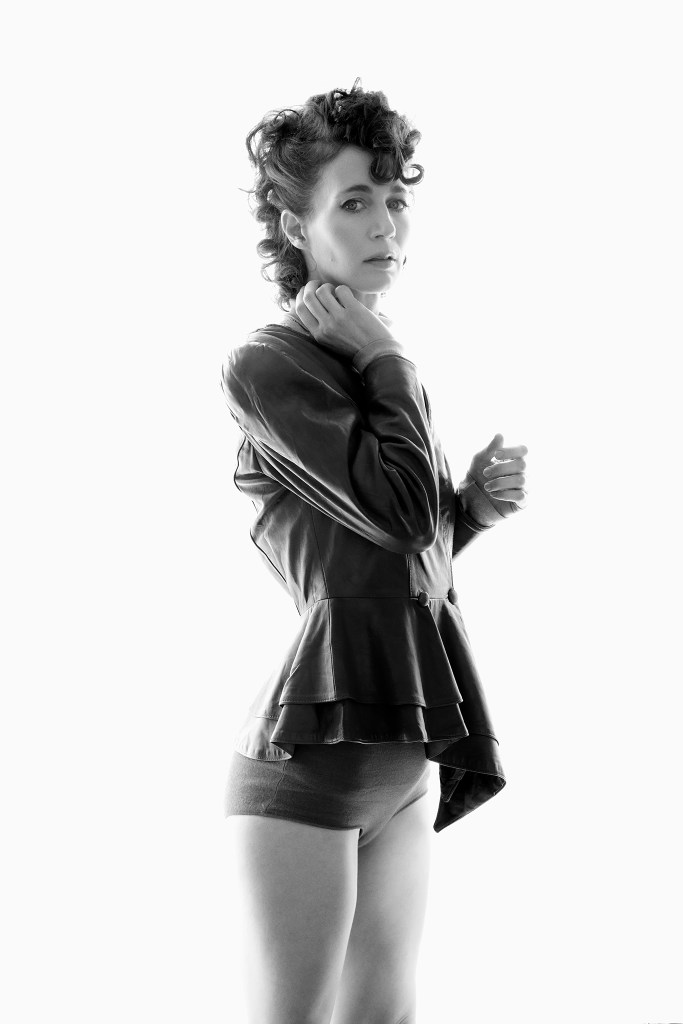