The chef's Buenos Aires restaurant is number 18 on the list of top eateries in Latin America.

It’s hard to imagine Auguste Escoffier, the father of modern French cooking, preparing gefilte fish, chopped liver or kasha varnishkes. Those dishes, which are part the repertoire of every Jewish grandmother worth her schmaltz, have rarely been seen on the menus of top restaurants. Until now.

Chef Tomás Kalika has been reinventing Bubbe’s recipes with a modern flair at his Mishiguene restaurant in Buenos Aires, which this year was 18th on the list of Latin America’s 50 Best Restaurants. New Yorkers can now experience the food of the Jewish Diaspora at Mishiguene at Intersect by Lexus in Manhattan’s Meatpacking District, where the pop-up restaurant will operate for the next four months while Kalika leads Intersect’s global chef-in-residency program. A permanent restaurant is planned for Miami next year. 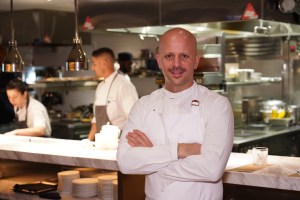 Mishiguene means “crazy” in Yiddish, but there’s nothing freewheeling about the restaurant’s operation. Even the raucous Klezmer music of joyous occasions playing in the background is carefully calibrated. “I’m very precise,” the chef said. “I have a huge commitment to the work. I’ve been very lucky in my career to work beside very generous people who gave me a chance to learn.”

Kalika, who moved to Israel when he was 17, found his way to chef Eyal Shani’s Miznon restaurant, where he worked as a dishwasher. His break came in 1996  when chef Jacques Divellec hired him as an assistant cook at the Jerusalem Hilton. “From that point forward, I didn’t stop,” said Kalika, who in 2010 returned to Buenos Aires to open his first restaurant, The Food Factory.

The place closed after three years, with Kalika questioning his culinary future. “It was a place that a chef with a lot of ego would open,” he said. “It was a very well-designed restaurant with the most expensive equipment. It was super-fancy. Instead of starting small, the restaurant lost $ 1 million.”

“‘You should be cooking Jewish food. You grew up in Jerusalem. Why are you cooking dishes that aren’t connected to your story,'” Kalika recalled Javier Ickowicz, the entrepreneur who would become his partner in Mishiguene saying. “It was a simple idea: a family-style cantina of Jewish recipes.”

Mishiguene follows the footsteps of the Jewish people, picking up recipes from Eastern Europe, North Africa and the Middle East, all filtered through Kalika’s Latin American lens. “Israeli food talks about a region, but talking about Jewish food is the widest culinary map,” the chef said. “We opened the first restaurant dedicated to Jewish food. This little idea that started at the worst moment of my life is one of the best moments.”