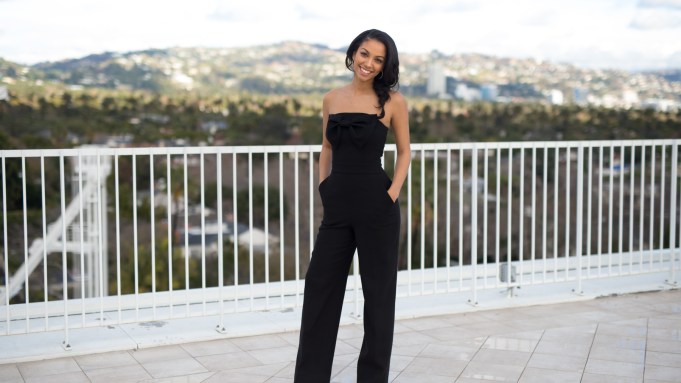 It could be fair to say that Corinne Foxx, this year’s Miss Golden Globe, has led a charmed life in her 21 years. As Oscar-winner Jamie Foxx’s older daughter (both father and daughter don’t disclose her mother’s name in the press), she was born in Los Angles, grew up on the set of “The Jamie Foxx show,” attends the University of Southern California, and was bestowed her current title with nary an interview or audition.

“I had no idea. I thought you had to apply and all that and they kind of just randomly sent me an e-mail. I was screaming and jumping up and down for two hours when I got it; I couldn’t even sit straight,” said the younger Foxx, whose wide smile and straightforward demeanor make her seem like anything but an entitled daughter-of. And no, her father didn’t pull any strings to get her the gig. “My dad had no idea. He found out when I found out. Everyone was freaking out,” she said from her perch at the Globes venue the Beverly Hilton hotel, her de facto home for the next few days.

RELATED: Look Back at Miss Golden Globe Through the Years >>

Foxx always felt she’d get into the industry at some point, but it was important to her to earn a college degree first. “I major in pubic relations and marketing, and I’ve really been focusing on my education for the last four years. My dad is super supportive of me but he dropped out of college and he’s really into acting and his art. Normally it’s the parents who want you to go get an education but it was really me.”

Midway through university, Foxx signed with L.A. Models as a segue into acting. “Channing Tatum called me when he heard I was going to start modeling, since he started in that industry, and he was just like, ‘You know, just be careful, just make sure you stay true to yourself,’ and I’ve kind of lived by that — to not let the industry change me or tell me how I should look or how I should be,” she said.

So far, she’s not done any professional acting, apart from playing a flower girl on the 100th episode of her dad’s long-running TV show and shooting a skit with him for a digital network. “I want to start going out for auditions when I graduate in May. So I’m taking a lot of acting classes and hopefully when I graduate I can make my big debut. I’d say I’m more of a dramatic actress, whereas my dad was born funny,” she says.

Her first on-camera job is certainly a good launching pad, as she notes that other Miss Golden Globes include “incredible women like Dakota Johnson, Rumer Willis and Melanie Griffith. It’s definitely a hard industry to get into and I’m lucky I have so many connections. Still, I don’t think it will be easy.”

She’s anxious for rehearsals on Saturday. “I want to know my mark and all the details. I think the first four times I go out there I will be very nervous and by the end of the night I’ll be throwing out those awards.”

As for her all-important gown, she’s had “a million fittings” and won’t disclose who or what she is wearing, but offered, “I originally wanted to go for something classy and traditional so when I look back I can be happy with it, but I ended up going with something that was a bit more flashy because I fell in love with the dress. It’s a little more glam that I originally planned.”

Like any Millennial, she’s social media savvy and has racked up nearly 58,000 Instagram followers and just signed on to Snapchat. “One-hundred-thousand followers by the end of the year is my goal. And I still like Vine. Do you know what that is? There are some really funny people on there and a few of my friends make fun of me because nobody uses it anymore.”

Although her number-one beauty secret is getting plenty of sleep, it’s been in short supply this week.

“This is once in a lifetime opportunity, so if I don’t sleep, it’s worth it. I drink a lot of water and I want to get a facial. And I’m always careful with my sunscreen.”

For now, she’s happy that her first real gig doesn’t involve memorizing any lines. “The best part about this job is I don’t have to speak on stage, I kind of just get to sit and observe and look pretty.”