The British actress searches for an opening night look at Tommy Hilfiger's flagship. 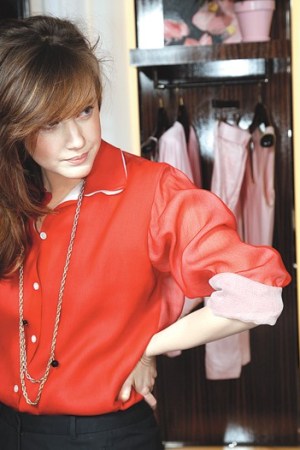 As Sylvia in the new MCC Theater production of “The Pride,” currently in previews at the Lucille Lortel Theatre, Andrea Riseborough dons everything from a vintage teal silk satin cheongsam to a Pucci-esque chiffon frock as she time-warps between scenes set in 1958 and 2008. The one constant to be found in her character’s sartorial changes, according to the actress, is her lack of preoccupation with her attire.

“I didn’t feel very strongly that Sylvia has a fashion hunger,” explains Riseborough, who stars as one part of a love triangle (opposite Hugh Dancy and Ben Whishaw) in Alexi Kaye Campbell’s work, which explores the evolution of gay identity over a 50-year period. “She’s just got great, simple taste.”

Simple might not be the first adjective to describe Riseborough’s ensemble when she arrives at the Tommy Hilfiger Fifth Avenue flagship on a winter morning to try on clothes for opening night on Tuesday. Dressed in vintage metallic, animal-print leggings, a checked Luella shirtdress, slouchy Terra Plana black boots and an assortment of belts and necklaces, the 28-year-old Brit looks more Camden Market than clean-cut, American sportswear.

“I’ll wear a red jumper with some green jeans, and people always go, ‘God that really works.’ And I’m like, ‘Yeah, it was on my floor,’” says Riseborough. Much like Sylvia, it seems, Riseborough has an innate sense of what works, though she does occasionally check in with artist boyfriend Joe Appel, who accompanies her to the Hilfiger fitting. “We ask each other, ‘Baby, is this completely f—ing mental?’ We tend to wear things that don’t match.”

Since actresses do sometimes have to step outside the comfort zone of their own closets when it comes to events, Riseborough heads to the racks of Hilfiger’s spring collection. She first goes for a casual, red cotton asymmetric funnel neck trench, to pair with a strapless mint silk chiffon corset dress with white trim.

“This mint green thing would completely not match,” she says, “which I would quite like.”

Next up is an airy, double-layer red-and-white silk organza blouse and slim black pant look.

“I like the transparency of that shirt a lot,” offers Appel.

“I really like this shirt. It reminds me of bowling,” says Riseborough.

Then it’s onto a red-and-peach version of the strapless dress.

Growing up in Newcastle, England, the daughter of a used car salesman father and secretary mother, Riseborough was a precocious child. Dad was a film buff, so she spent much of her time watching black-and-white movies on “the telly.” At nine, she was cast in her first play, “Riding England Side Saddle,” at the People’s Theater in Newcastle. From then on, Riseborough did school plays, student films, the National Youth Theater, anything to quell her acting thirst.

After high school, “The plan was that I would go to Oxbridge and read English,” she says. But much like her unlikely outfits, Riseborough veered from the expected course. Instead, she got a flat in Newcastle’s gritty city center and spent a few years doing everything from selling her own art to singing with a band to waitressing in a Chinese restaurant.

“I got a lot of things out of my system,” she remarks, though acting beckoned. “Time went on and I was like, ‘This is the last duck I will ever shred and I’m auditioning for RADA [the prestigious Royal Academy of Dramatic Art] tomorrow.’”

She completed the school’s three-year program and went on to work with the likes of Sir Peter Hall and Mike Leigh. She starred in a 2008 Donmar Warehouse production of “Ivanov” opposite Kenneth Branagh and even played a young Margaret Thatcher in a controversial TV movie, “The Long Walk to Finchley.”

As for what the future holds post-“Pride,” Riseborough is as laid-back about it as she is in her approach to fashion.

“Like the oracle says, ‘Know thyself,’” she says. “Just really trust your instincts.”