A colorful party for Miu Miu…Musing about at the European Fine Arts Fair in Maastricht…Dining with Liberty. 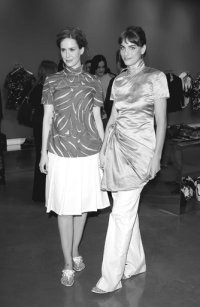 A slew of indie starlets, including Sarah Paulson and Amanda Peet, blew off basic black in favor of colorful surfer-girl gear for Miu Miu’s third annual IFP/LA Filmmaker Labs cocktail party, held at the Melrose Avenue boutique on Friday. But Miu Miu’s minis took a little getting used to.

“I don’t know about this dress,” said Shiva Rose McDermott, tugging at the hem of her purple and white number. “I’m not going to be able to bend over to look at the shoes.” Of course, her husband, Dylan McDermott, was all for it.

Meanwhile, at the other end of the store Adrien Brody basked in a pre-Oscar glow and Paulson plugged her candidate.

“I am personally campaigning for my friend Renée Zellweger,” she said. “That’s my other job.”