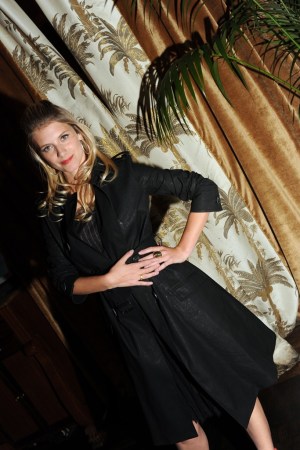 While the 29-year-old began acting in her native France after being discovered by Gérard Depardieu on the set of 1999’s “Asterix and Obelix vs. Caesar,” her dream, she said, has always been to be a director.

This story first appeared in the April 3, 2012 issue of WWD. Subscribe Today.

“I think I wrote my first story when I was six,” said the actress. “I was obsessed by making a play — I was so annoying. Every cousin, every brother — I made them be in my plays. I was not destined to be an actress at all. I really wanted to be a director.”

Laurent’s first effort, the 2008 short “De Moins en Moins,” made the Cannes Film Festival — the only French short to be honored that year. “I cried,” she said, thinking back on her reaction when she heard of her nomination. “It was crazy. I was like, ‘It’s the first one!’ Craziness.”

Her next project, a full-length film called “Les Adoptés” (“The Adopted”), made its U.S. premiere last week at a Cinema Society screening. The evening was co-hosted by Dior Beauty, for which Laurent is the new face of its Hypnotic Poison scent. John Cameron Mitchell directed the Europe-only ad campaign.

Laurent herself directed, wrote and stars in “Les Adoptés,” which she said took five years to put together. “I did a lot of films during that time, which I think was good,” said the actress, who was clad in a black Dior dress and tangerine heels for the screening. “And I met Quentin Tarantino [who cast her in 2009’s “Inglourious Basterds”], Mike Mills [who directed her in 2010’s “Beginners”] and I did amazing French movies. I love observing people working. It was the best cinema school ever, for five years.”

Despite how eager she was to step behind the camera, Laurent admits to a few butterflies as she did. “I was obsessed with my script for five years, and after five years, you get comfortable in that writing process — because you can always change everything every day. All my shots were in my mind, and I wasn’t taking any risks because I hadn’t started shooting. Then, suddenly, you’re on set with 100 people and it’s like, ‘Here we go!’ ”

The first day on the “Les Adoptés” set was nerve-wracking — “We didn’t keep anything from the first day,” said Laurent — that nervousness quickly went away. “The second day,” she said with a laugh, “I was like, ‘This is your f—ing job. You wanted to do it.’ And it was magic, the best thing I ever did. I learned to be happy for the first time in my life, because for the first time I really arrived in the place where I was meant to be. As an actress — even when I was shooting ‘Inglourious Basterds’ — I was thinking, I want to be him, the man behind the camera.”

Laurent shot “Les Adoptés” in Lyon. “I didn’t want to make another Parisian movie,” she said. “They are always kind of the same, and the light is awful in Paris because it’s so gray.”

She’s currently writing her next film, which she said is going to be “a huge love story” in the tradition of “The Bridges of Madison County.” But she’s writing her own ending. “I was so upset that at the end, [Meryl Streep] didn’t open that f—ing door and get in the car,” she said. “So I’m going to write the inverse of that.” She plans to direct — but not star — in the film. “My dream life is to make one amazing movie as an actress each year and spend the rest of the time writing and making my own movies and working as a director.”

She released her first album, “En t’Attendant,” last year in France. “My big dream was to work with Damien Rice, and I did. He taught me how to be free. I did all my record on my bed, with a mic — I did everything I wanted. I produced it; I composed it. It took me three years of work. Every time I make something, it’s honest. I’m not thinking ‘OK, I should do this, because of that.’ I don’t read reviews either.”

Laurent has little patience with those who would happily slot her into just one creative endeavor, insisting that writing, directing, acting and singing can all live side by side in her life.

“My country didn’t really like to see me as a singer,” she said. “They accepted I was a director but not a singer. I can understand that they were thinking I was doing too much — France doesn’t like it so much when everything’s big and successful at the same time, and I had that frustration with my record. It’s absurd. Why can’t you be free? Just because you’re an actress — or being an actress first — doesn’t mean you never want to try other things. If you do it with your heart, why should it matter? I’m not doing it for the money. And I realize how lucky I am. I always say to myself, ‘There are so many girls on the planet that are more beautiful than I am, more talented, more funny and clever, and they’re not working.’ It’s about luck, too. But I’m not going to feel guilty all the time because of that. It’s my dream to do everything.”

Acting will never completely vanish for Laurent — she already has one César, the French equivalent of an Academy Award, for her role in 2006’s “Je Vais Bien, Ne T’en Fais Pas” (“Don’t Worry, I’m Fine”) — but she plans to intersperse her roles with directing projects.

Laurent is filming “Now You See Me,” a tale of FBI agents tracking a team of illusionists who rob banks during their performances and reward their audiences with the money. “It’s a big, action movie, with a huge, amazing cast and things blowing up — like cars on a bridge. We’re having so much fun, and we’re so close.” Her co-stars in the film include Isla Fisher, Mark Ruffalo (“He bought my CD three times!”) and Woody Harrelson.

She initially worried, she said, about her directing from “Les Adoptés” bleeding into her acting.

“I was afraid I’d be saying ‘Why are you putting that camera here?!’ when I’d get on set,” she said with a laugh. “I was like, ‘I’m going to be so annoying! He’s going to hate me!’ So I didn’t say anything, and I was really a good girl. I think I’m easier to work with now, because I’ve had my own experiences as a director.”

Of the acting, she notes that it also allows her to meet a wide range of potential actors for her own projects. “I’m going to write for people,” she said. “I would love to [write and direct] a movie with Mark Ruffalo — I’m acting with him now, and he is the best partner ever. I had the best time with Michael Kelly. And I love Woody. Dave Franco is the sweetest guy ever. Isla —you just want to do shots with her all the time. Bradley Cooper. Scarlett Johansson. Scarlett and Bradley were the first ones to ever watch ‘Les Adoptés.’ ”

She also likes being acknowledged as a director, because “suddenly people see you as an artist, instead of an actress. My only fear was finding my own style — and I was terrified. I didn’t want to steal things from other directors.” She purposely gave up watching other movies for the year she was filming. “Every time you’re watching a masterpiece, you think it’s easy to do, which is not true,” she said. “Boogie Nights” and “All About Eve” are on her list of favorite films and she is enamored of a wide range of directors, including Pedro Almodóvar. “I’d love to work with James Gray, Terrence Malick — let’s talk about dreams — I’d love to make another movie with Tarantino and another with Mike Mills.”