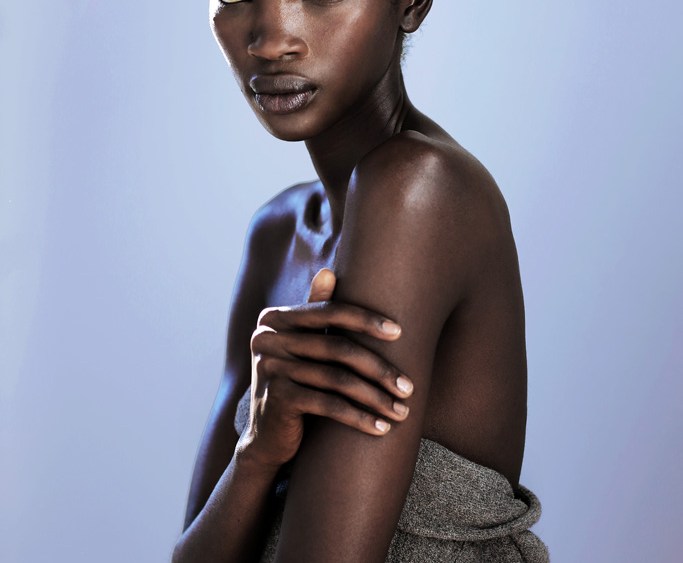 Uganda-born beauty Aamito Lagum is off to a promising start after winning “Africa’s Next Top Model,” filmed in Cape Town just over a year ago.

Though her mother was initially apprehensive about letting her participate, Lagum ended up landing a one-year contract with DNA Model Management and receiving a hefty cash prize. Since then, the 22-year-old has been hard at work with editorials in WSJ Magazine and Elle South Africa while traipsing the globe for her first official show season, having walked in shows such as Bottega Veneta, Giles, Paul Smith, J.Mendel, Marc by Marc Jacobs, Rag & Bone, Lacoste — and opening The Row. Not too shabby.

At the Sophie Theallet show, 5-foot, 11-inch Lagum was tasked to close the show in the final look — a gold evening gown that proved tricky to walk in. She made it down the runway with utmost grace and earned a standing ovation from the crowd.

WWD: How did you start modeling?
Aamito Lagum: This one time, I was on my way to school when this lady stopped me and said, “You’re so beautiful, you should try out modeling.” So I tried it, but my mom didn’t like me doing it. In my country, it’s not a good look. Most of the girls who claim they’re models are actually “video vixens.” I did one runway show, but my mom said, “No, you cannot do this.” And the jobs do not pay at all. Every time I would have a modeling gig, I would have to ask my mom, “Can I have some money to go to the gig?” And she would be like, “What is the point of this? This is not going to take you anywhere. I need you to go to college, get your degree and become a lawyer or whatever you want to become, to be able to support yourself.” She wanted me to study, be a good lawyer, have a nice car. She was being a good mom.

WWD: Yeah. Sounds like she was just looking out for you.
A.L.: She’s a single mom and she didn’t have that much to offer. So I finished high school, I studied, and then “Africa’s Next Top Model” came about right when I was beginning to look for a job. I was 20 at the time. I told my mom: “Look, let me just give this one last try. I really wanna do this. I want to be a model. I want to do this as a profession. I feel like I love it and it’s where I’m supposed to be. But I totally understand that you can’t do it in Uganda and survive.” So she was like, “Fine. I’m gonna give you transport fare to Nairobi.” That’s where the casting was. So I took a 16-hour bus from Uganda to Nairobi. I arrived there the morning of the casting and I took a bus back home that same night.

WWD: Then what?
A.L.: Honestly, when you’re on the bus all night, you look like sh-t. I reached Nairobi that morning — I was among the first people to arrive — but I wasn’t feeling confident at all. I looked horrible because I had only slept on the bus. My eyes were like…it was crazy. Anyway, so during the casting, there were different stages. I made it to the final stage — all in one day — but I had to leave to catch my bus home. I told the producers, “I have to catch my bus.” It was leaving at 7, and the time was 6:15. The producer went into a room, came out, and said, “Aamito, we will call you.”

WWD: And I assume the producer kept his word?
A.L.: After a few days, they called me and said, “You have made it to be among the 12 girls on ‘Africa’s Next Top Model.’” My mom was like, “Wow, finally!”

WWD: Growing up, did you ever think you had what it takes to be a model?
A.L.: When I was 16, of course everybody would comment, “Oh, you should be a model.” But I didn’t think about it. I felt like a black swan. In my country, people who are tall and skinny are not celebrated that much. They usually like a lady to be curvy. I didn’t feel unique…I didn’t feel womanly or feminine. I didn’t feel beautiful when I was growing up. My mom always told me, “You’re unique, you’re beautiful” — things that your mom says. But since it’s coming from your mom, it’s like, “Well, you’re supposed to say that.” You kind of don’t believe her.

WWD: You walked a few shows locally, but this will be your first official show season in New York and Europe. Have you been practicing your walk?
A.L.: I love the runway so much. Every time I do it, it gives a nice thrill…but at the agency, I really look stupid every time somebody gets out of the elevator and watches me practicing my walk in my heels. It’s so awkward. But you gotta do what you gotta do.

WWD: How’s the model apartment?
A.L.: Before I came here, I heard the worst stories about model apartments. I came mentally prepared for the worst. But it’s totally the opposite. The girls that I live with are amazing.

WWD: Does your mom miss you?
A.L.: She misses me, but she’s like, “If you’re happy and you love what you do, then keep on doing it.” I love it, I love it. It’s new, I have to adjust to it, but I think I’m doing pretty well in terms of adjusting. When she sees my work, she’s like, “Oh my God, you look so beautiful!”

WWD: What do you like to do in New York?
A.L.: I love dancing. I don’t like to go to the dance clubs, but I love to dance around by myself. I try and go out to eat…New York has a lot to offer. I’ve met a few friends here and there.

WWD: What are some of your dreams and goals?
A.L.: To work with Anna Wintour, obviously! And Franca Sozzani in Vogue Italia. And Edward Enninful at W. And Karl Lagerfeld. I’ve always been interested in fashion. I wasn’t exposed to it that much, but even when I was growing up in Uganda, I would look at the labels of my clothes. I went to Barneys here, and it was so exciting.

WWD: Are you on social media?
A.L.: That’s how I get my information. That’s how I know what’s happening. When I was in Uganda, I would follow Vogue magazine on Instagram….I would learn everything that was happening. I knew who was doing this campaign or that campaign through social media.

WWD: Any model crushes?
A.L.: Let’s see, I have a crush on Joan Smalls. I think she’s absolutely stunning. I also have a crush on Karlie Kloss, and I’m totally jealous of her friendship with Taylor Swift, because I really love Taylor.