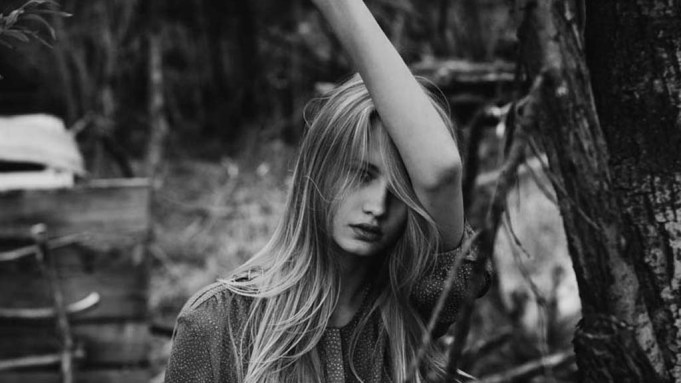 With her piercing blue eyes and long blonde hair, Alexandra Titarenko has a versatile look. In some shots, she appears baby-faced and sweet; she just wrapped a shoot for one of Kate Spade’s latest campaigns, which are typically girly affairs. But in other images, it’s hard to imagine Titarenko looking anything but dark, mysterious and brooding (she was one of Yohji Yamamoto’s runway picks last season, go figure).

“Yohji’s so cool,” Titarenko said of the designer. “We had a fitting and he would ask the girls to walk together. He was looking at how we were walking, and he would say, ‘This girl can stay, and this girl can go.’ It was a nervous moment.”

The 19-year-old, Wilhemina-repped model is used to those nervous moments by now. In her first year on the runways, Titarenko walked both Chanel and Marc Jacobs. This season, she only walked a few New York shows — Vivienne Tam, Libertine, Rebecca Minkoff, Costello Tagliapietra among them — and then, in lieu of traveling to Europe, she stayed behind in New York for editorial and campaign work.

Titarenko was born in Kazakhstan, then moved to Russia when she was 15, where she was discovered two years later. She’s currently living with two friends in Manhattan, which she said is way more preferable than a model apartment: “They’re just so noisy and messy.” And though she’s loving New York, she admitted to occasionally feeling homesick. “I can’t wait to go home and watch some movies,” she said. “I’m always so happy to go back home to see my family and my cousins, who are 4 and 6 years old. When you’re traveling, you’re missing these moments when they’re growing.”

WWD: How did you start modeling?
Alexandra Titarenko: I got discovered in Russia at school. I was about 17 years old. I had Chinese classes in my high school. One day I went to class, and afterwards, I lost my key, so I went back to my teacher to ask her if she found a key, but she wasn’t there. And then the modeling agency discovered me on campus.

WWD: While growing up, had you ever thought about giving modeling a shot?
A.T.: I was thinking about it, but I didn’t know how everything worked. When I was a child, I would watch Fashion TV and say, “This looks cool, but whatever, that will never happen to me.” It seemed so far away. Now, my relatives say, “Do you remember when you were 3 or 4 years old and you said you wanted to be a model?” I don’t even remember that. But if you have a dream, you just have to push for it and then it will come to you.

WWD: Is your family supportive of your career now?
A.T.: I’m an only child, and my dad was extremely — he said no at first. A lot of people think it’s not a real job, or not safe. It was so hard — I would be crying to him. But one day, my mom called me and she said, “Dad said yes.” I was so happy. And now, they’re so proud — especially my dad. Now, he’s like, “Look, that’s my daughter in the show!”

WWD: Because you were so young, how did you balance school with modeling?
A.T.: I started traveling [for work] right away while I was in high school, but I started modeling full-time last year after I finished high school. It was difficult for me to go to university and model [at the same time], so now I study online and it’s much easier. I’m studying public relations, advertising and marketing. I feel so interested in that. It feels close to modeling, also.

WWD: Tell me about walking the Chanel show last fall.
A.T.: It was so crazy. Last year was my first season ever and I went to Paris. I had a Chanel casting, but it was all going so fast. Then one day, I was sitting in Starbucks drinking coffee with my friend, and I got an e-mail titled, “Fitting for Chanel.” I was like, “What? Seriously? Is this really possible?” I saw Karl, and I was like, “OMG.” One girl was shaking so hard and everybody was giving her water. Then later, my booker called me and said, “Hi Alex, are you sitting right now? You’re booked for Chanel.” It was wonderful. I was so happy.

WWD: And more recently, you shot the Kate Spade campaign. How was that?
A.T.: It was really so much fun. I loved the team. I love photo shoots, though. Especially when the team is good, and you all give positive emotions to each other. Even when the shoot is 9 or 10 hours long, you still feel a lot of energy.

WWD: What else do you do for fun?
A.T.: I’ve been going to some parks, doing yoga, playing tennis. I was playing tennis for five years, but I stopped that when I was studying and traveling for work. And I’m always asking photographers for advice. I’m not dreaming to be a top photographer or anything. It’s just for my soul, it relaxes me. Maybe one day I’ll take some photography courses. One time, I got my dream come true — I took my film camera with me on a shoot for a magazine. The photographer was like, “Grab your camera.” Then he started shooting me with my camera. He would be shooting me and I would be shooting him. It was so much fun.

WWD: What do you look forward to in your career?
A.T.: Modeling might not be forever, but I’d love to be close to this industry. I don’t know if I want to live in Russia — maybe New York. I just keep doing everything that I can. I’m enjoying life and then we’ll see what comes. It’s so hard to say what I want to do because the fashion industry is huge. I’m so jealous of these people who say, “I want to be a doctor.” It’s cool when you know exactly what you want.