One of New York’s newest models talks about being discovered, perfecting her strut and why Sly Stallone’s still got it. 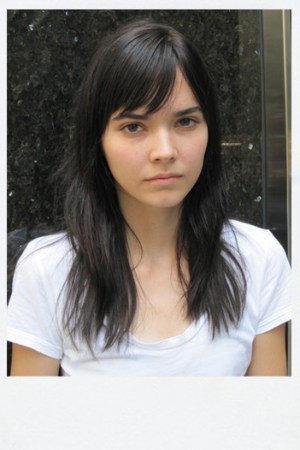 Freshly plucked from the mountains of Utah, this modeling newbie has only been in the Big Apple for four weeks. Dark features contrasting porcelain skin, mixed with wide cheeks narrowing to a soft chin make Beth Chase a standout. Equal parts Björk and Snow White, her unique look will likely garner wide-ranging attention in her first New York Fashion Week.

Favorite designers: “I like Chanel and Gucci. Also, Calvin Klein and Prada.”

Favorite body parts: “At photo shoots everyone says that they like my eyelashes since they’re so long. They’re like, ‘Oh, we don’t have to put fake eyelashes on you.’ People also say, ‘Wow, you have a really good neck. It’s really long.’ Which is good, I guess, since you can’t really grow or get that from anything else.”

How did you get into modeling?

“I worked at Zupas, this sandwich place. I rung up this lady [model scout Erin Olsen]; she just kept looking at me really weird and I was like, ‘Okaaay…’ And she said, ‘Have you ever thought of modeling?’ I had a lot of people come up to me and ask me the same question, but usually in Utah they’re all scams. Like, ‘Pay $2,000 to get a portfolio.’ But she told me, ‘No, this isn’t a scam.’ My mom and I talked to her and were like, ‘Oh my gosh. This is the real deal.’ I left a week and a half later for New York.”

If you weren’t a model, what would you be?

You were on the marching band in high school and played the flute?

“I actually came here for the Macy’s Thanksgiving Day Parade in my junior year. That was the only time I visited New York. We went to Planet Hollywood and I saw a cement imprint of Rocky Balboa’s hands. I’m in love with that guy. I mean, he’s so old, but once I saw the movie I was like, ‘Oh my gosh, he’s so cool!’”

What is it about Sylvester Stallone that’s so cool?

“I don’t know. He writes his own stories, but then is part of the movie too. It’s weird because I could never see myself acting with him when he’s the one who wrote the story. It’s a different perspective. I like ‘Rocky.’ It just has a good feeling about it.”

What do you do when you’re not modeling?

What are your favorite wardrobe pieces?

“I love wearing these dresses. They’re skintight. I got them at Forever 21. With, then, just leggings and some really nice heels. Oh, I love skinny jeans. But if it was just my opinion, I’d wear sneakers everywhere. I run, so I love Nike. Gucci, also, has a pair that I really like.”

What’s on your iPod?

“I like Cascada. I really like the song, ‘Don’t Stop Believin’ [by Journey]. I’m addicted to that song right now. I like Rihanna, when I’m in a mood to dance around. I also like classical music a lot.”

Is there a model that inspires you?

“Karlie Kloss. She was 13 when she was found. I just really respect her for getting into modeling at that young age. I couldn’t see myself getting into that.”

What are your modeling goals?

“My friend and I were saying that if we get into three runway shows in New York that we’ll go to a Broadway play. Right now, I’m mostly focused on runway, getting my walk down, being more comfortable with walking. I want to see how far I can go. I want to keep learning. Every photo shoot you go to — even if you’ve done it for five years, two years, a month — you can always keep learning.”

What other ways do you keep learning?

“YouTube. It’s really handy to look up some runway shows just to see what their walk is like to practice.”

Do you have any dream runway to walk?

“Prada, definitely. Gucci and Chanel, too. They’re just my all-time favorites. It would be awesome to get into those shows. It would be a dream to get into Prada or Calvin Klein. A lot of people say I have the ‘look’ for Prada. I’ll just have to keep practicing my walk to actually have a chance.”

Your life changed dramatically in the last month…

“All the workers at [Zupas] were like, ‘We were involved in this whole new life!’ It’s pretty impactful, how everything changes so fast. And where you are really matters. I never pictured this fast growth. I thought it would take me a while to start getting comfortable in front of the camera, but now I feel like I can do anything. It’s a big change.”