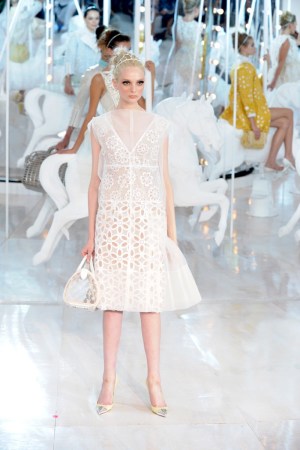 Ever the cool girl, Chrystal Copland’s “awkward” phase during middle school in Perth, Australia amounted to wearing baggy Eminem Ts and dying her hair a multitude of colors. “I rode a BMX silver chrome bike everywhere,” she laughs. “I don’t know if that’s embarrassing or not.” Now 20, Copland has gone back to blonde and tossed those shirts but the Fusion-repped beauty still has an edge, which was likely a selling point for Marc Jacobs: She opened his spring Louis Vuitton show last week. After wrapping up an exhausting season, Copland jumped right into a Vogue Russia shoot with Patrick Demarchelier in Paris. We caught up with her between shots.

So what’s it like to shoot with Patrick Demarchelier?
He’s really nice. I’m a bit star struck. I always get like that. Like yesterday I saw Kate Moss and I couldn’t stop staring — I felt like a creep. But yeah, I thought it would be more pressure since it’s Vogue but everyone’s so great. All of the models have these big crazy updos. It’s always fun to be part of something so creative.

You walked in 21 shows. Are you glad it’s over?
Yeah, it was my first season so it was really overwhelming but I enjoyed it. After this shoot today I can finally relax.

Were you given any advice before New York started?
My best friend Dempsey [Stewart] told me how to take comments that are difficult and how to handle it when you’ve got like six people touching you and screaming at you to come here, do this, do that. She said you just have to try and remain calm and be nice to everyone because it’ll be over soon and it’ll be worth it.

What was the most surprising thing about the shows?
Opening Louis Vuitton. I didn’t expect that at all. I got called in for a 3 a.m. refitting and I was thinking, why do I have to go back for a refit? Have I done something wrong? When I got there Marc Jacobs was like, “Chrystal, you’re opening the show!” I was just over the moon. The call time for the show was 4:30 a.m. so I didn’t sleep at all but it was easy to stay awake because I was just so happy and so excited.

It must have been great to hear it from Marc Jacobs himself.
Yeah, he’s such an amazing designer. Apparently he really liked me and Katie Grand really liked me as well. It’s a shock to hear something like that about yourself because you never really think you’re something special or anything. You’re more focused on getting to places on time and stressing out about where you have to be.

Were you nervous about walking since this was your first season?
No, I mean I did shows in Sydney and in Tokyo for their fashion weeks but this was like my first real season, in the majors. Walking is a little different in Australia though. When I got to New York, they were telling me like 40 times a day how to walk and they were always like “Faster, faster, you’re not going fast enough.”

What was your favorite look that you wore?
This strapless evening gown at Giles. It was made of silk, I think, and was really incredible. I felt really beautiful in it.

What was the most not-fun thing about doing the shows?
The hair pulling. I’ve lost half of my hair in the past month because it just gets ripped out. But it’ll grow back. I mean, you just have to think you’re there to work and that’s part of your work. That’s how I get through it.

What’s something you learned from the season?
Everything looks so beautiful when you see it that you think it comes from this glamorous fantasy world but behind the scenes, everyone’s screaming and yelling at each other and stressing out. People are running around like crazy backstage. If you want to go to the bathroom they’re like, “No you have to stay here.” It makes you appreciate how hard everyone works. Designers are up all night doing fittings. They’re so passionate, that’s why everything has to be perfect. I can understand why they’re yelling and getting crazy — they want their show to be amazing.

So let’s talk a little bit about your upbringing. What was it like growing up in Perth?
It’s kind of a small town. I live there with my grandparents. They still call me every day. It’s so important to have family support. I Skype with them when I can.

Were you more of a girly girl or a tomboy?
I was really weird looking. I dyed my hair black and crazy colors. My mom was a hairdresser for a few years so she used to try all crazy colors on me in primary school so I’d always have different colored hair. I had it all blue-black at one point and hot pink when I was six.

Sounds like you were like a badass kid.
I guess. I was the one girl in first grade with pink hair so maybe that qualifies me. I was really obsessed with Eminem when I was like 11 and 12 so my walls were covered with his posters. I was kind of a weirdo.