Brazilian model Dani Witt knows how intense the international runway circuit can be. 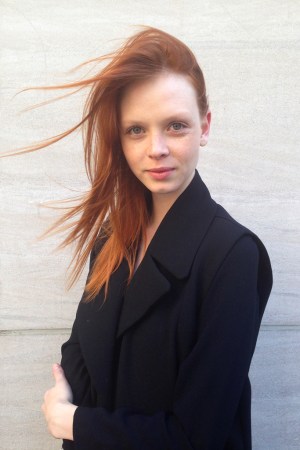 Brazilian model Dani Witt knows how intense the international runway circuit can be. After she opened in her very first show — Vionnet couture back in January 2014 — the Next-repped model has walked every season since. “When we are doing fashion week, we are all complaining like, ‘Ugh, this is killing me,’” said Witt of the common sentiment among models. “But then after three months, we are all like, ‘I miss fashion week!’ because it is really is exciting.”

The 22-year-old redhead — a natural blonde — grew up in the south of Brazil but is actually of German ancestry. “My sister is 41 and my brother is 36; I was an accident,” she said with a laugh, explaining that her childhood consisted of playing sports like volleyball. After a local scout persuaded her to give modeling a try, she started her career in São Paulo before moving to New York at age 20 and has since appeared in the pages of British Vogue, Teen Vogue, Dazed & Confused, i-D, Elle and Harper’s Bazaar as well as campaigns for Honor and Blugirl.

“I really love every job that I do,” she said. “Of course, it’s really good to do big campaigns. But it’s nice to be with clients that treat you well. I think that each client is special — it doesn’t matter if they are a big or small brand.”

WWD: Why were you initially hesitant?

D.W.: I started modeling when I was 16, but I felt too young. I didn’t want to leave my mom and go far away. I was always going back home to study and be with her. But the [model scout] was right, because I didn’t really know what it was like, and then I tried it. He took me to São Paulo — I’m from the south of Brazil, where we don’t have much. I did my first photo shoot and I was like, “Actually, I like this.” My mom came with me, and she was happy for me.

WWD: You’ve lived here for almost two years. How do you like New York?

D.W.: I was subletting places, but I finally got my own place in Brooklyn Heights; I’m sharing with someone. I’m really happy now. It’s great to have my own space and not live out of my luggage anymore. I like to hang out with my friends. I really love going to cafés, talking. I’m not really a night person; I like the daytime. I like to wake up early, go to the gym, go to the park, stuff like that.

WWD: What do you miss most about Brazil?

WWD: You opened the Vionnet couture show last year and have walked every show season since. Do you enjoy it?

D.W.: It’s a bit crazy, fashion week. It’s a bit too much. But it’s one month-and-a-half of magical moments and new experiences…So many things happen. You know, after that, you realize how strong you are, because you need to be.

D.W.: I was always blonde. Before they dyed it, I called my mom and I was crying so much, and my mom was like, “Dani, it’s just hair. They’re just coloring it and it can always go back. It’s a really simple thing.” It’s been red for a year now and I really love it. The only thing that sometimes makes me upset is that you always have to go to the salon and use special products. Now I really have to take care of it to make sure that it’s always looking good.

WWD: What’s the craziest hair and makeup look you’ve ever had?

D.W.: When I did the Marc by Marc Jacobs show, they really tied my hair up and made my eyes look as if they were taped back. It was so tight. My mom, when she saw the pictures, was like, “What did they do to your eyes, Dani?” Also, last fashion week, they dyed my eyebrows. I had never done that before. I had never seen myself like that before…it was kind of cool.

D.W.: One of the things that I always wanted when I started to be a model was to be on the cover of American Vogue… I would really feel amazing if I got that. In life, I want to have a family. I want to be a nutritionist. I want to work with food and diet, especially to help models. I think we have such a big problem with that, and I would like to understand what happens to our bodies and minds.