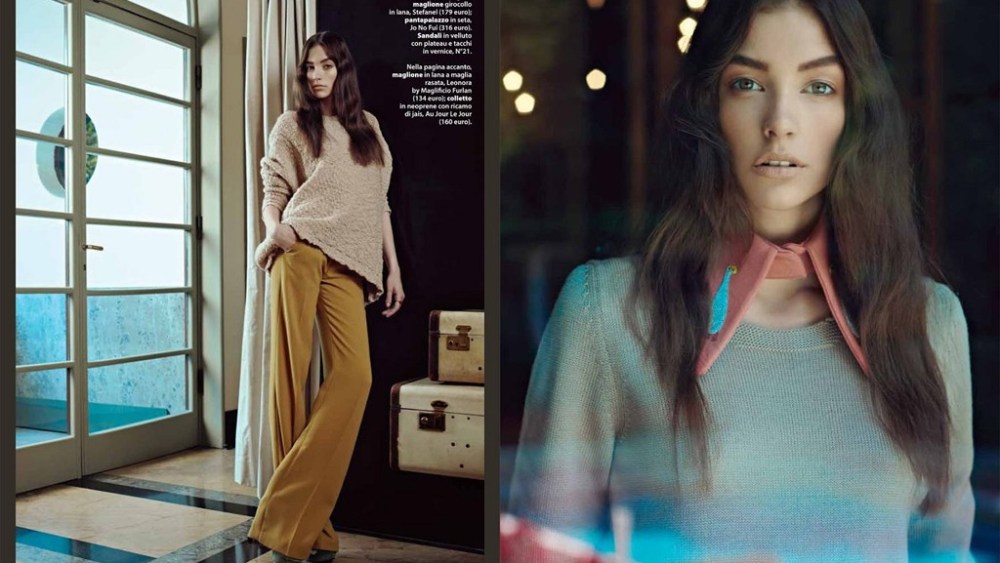 Eszter Boldov has got it going on. The 20-year-old Hungarian model, based in her native Budapest, was about to conclude her stay at a model apartment in New York and fly home for the holidays when she made a pit stop at WWD’s Manhattan office. Though she’s worked mostly internationally — landing editorials in Vogue Italia, Elle Italia, InStyle U.K. and L’Officiel — she’s starting to break out Stateside as well, having just shot an editorial for Cosmopolitan. As the interview unfolded, Boldov displayed a beyond-her-years intelligence and level-headedness, and thus it came as no surprise when she revealed that, in addition to modeling and studying communications at university, she’s also editor-in-chief of a sophisticated online magazine called Philosophy (philosophy-magazine.com). Posting biannually, the magazine was established as a platform to highlight the Hungarian creative industry.

“Before I started modeling, I was nothing special, really,” Boldov insisted, adding that she never set out to become a model. “I had a very simple life. I had my two best friends, we were in school, and I was just trying to get the guy I liked to recognize me. I was not the cool girl in school. I was not the fashionable one.”

WWD: How did you start modeling?
Eszter Boldov: I was discovered on Facebook, actually. An agent scouted me based on my profile — we had a common friend — and messaged me and asked if I wanted to meet. Then I signed with them. First I went to Asia and I traveled a lot there. Now I mainly work in Europe.

WWD: Growing up, had you ever considered giving modeling a try?
E.B.: Of course, everybody really wants to be a model and all that, but I was more drawn to the fashion industry. I didn’t want to be a model; I just wanted to do something creative, like fashion design. When this opportunity came up, I was like, “OK, sure, let’s start it.” It’s not my biggest dream and I never expected that I would get this far. I thought it would be fun. I thought, “Let’s do a few photo shoots, get to know people and then take a step forward.” But then it just became my life, completely.

WWD: What was the first big job you landed?
E.B.: I did a year in Europe and my very first job, I’m not joking, was an editorial for Italian Vogue. It was a huge thing. I was 17. It was just great to give something back to my agents, because they worked so much for me, and I felt like, finally, I did something that they could be proud of.

WWD: How do you like New York?
E.B.: It’s the city that I love the most, New York. It’s so easy living here. I’m so happy that the work took off as well, because then I can come back. I live in a model apartment in the East Village, but next year, my friends are coming, so we’re thinking about renting our own place. In a model apartment, with so many girls, it’s not always easy to keep friendships because everyone is always leaving and going. But this time, I’m lucky because I have very nice girls with me.

WWD: What do you like to do in your spare time?
E.B.: I’m always trying to keep busy. I’m not that kind of person who’s sitting on the couch and watching TV. I read a lot, I like blogging and browsing the Internet, mostly for school stuff. I love doing sports, too — like bikram yoga classes or going for a run. Also, my friends and I are very outgoing, so we always plan things, like going ice skating and other stuff we’ve never done before.

WWD: Tell me more about your online magazine.
E.B.: It’s called Philosophy. It’s based on the Hungarian creative industry. We are just trying to show all the works of these talented people to the fashion industry. It’s fashion designers, other designers, architects — creative people. We shoot with a lot of fashion photographers. We have really nice editorials at the moment. We launch it two times a year. The fourth issue was out on the 15th of November. I’m the youngest one involved; it’s kind of weird to hold everything together when everybody is five or 10 years older than me. But it’s fun because we are all good friends. We have the girl from the fall Dolce & Gabanna campaign, Victoria [Ceretti], on our latest cover. I’m really proud of that because I love her.

WWD: School, modeling, the magazine. How do you balance everything?
E.B.: It’s very hard. School is on hold now. For the next year, I’m going to be a private student. I hope it will come together and I will be able to manage it. I go home for all the exams. I will see. It’s definitely hard to manage.

WWD: What is the most rewarding part of modeling?
E.B.: Traveling, seeing the world and getting to know yourself. You are getting into really weird situations where you’re the only one who you can rely on. Most of the time, as models, we are alone. I know how to solve different problems. I think that’s really important. Also, making friends and learning languages. I speak English, Hungarian and a little German. I’m just trying to speak German because one of my roommates is from Germany.

WWD: Has modeling, with all of its access to great fashion, affected your sense of style?
E.B.: Topshop, & Other Stories, COS… I love these brands, and we don’t have them at home. Nowadays I like to add more extreme accessories, like my snakeskin booties. I don’t think I’d wear these if I was still at school. But I’ve always liked simplicity: T-shirts, jeans, cool shoes.

WWD: What are some of your goals?
E.B.: When you start modeling, or any kind of career, you’re very excited about things. You have these huge dreams. But sometimes it’s tough in modeling, because if you have an option for, say, the Prada show, and you don’t get it, some girls will get really depressed. I used to be like that. But I realized it’s much easier to enjoy what you can get, and not think about what you want to get. It will come if it’s your time. Right now, I’m just trying to enjoy the things that I’m doing and I’m really enjoying it because I’m very thankful for all the jobs I get. Of course, I have huge dreams, but I just don’t think about them.

WWD: Are there any models you look up to?
E.B.: I really like Daria Werbowy. She’s beautiful, smart, very cool; I love her style. I just love how she’s very realistic about herself, and she’s just there to pose for Celine without any makeup on. I love that because this is what real beauty means, not Photoshop and makeup.

WWD: How important is social media to your career?
E.B.: I think it’s definitely important. If these are the rules of the game, and you’re in the game, then you’re just going to accept it. I have an Instagram [account], but I try not to post too many selfies because I know that it’s annoying. I try to post some nice, creative stuff, too. But I will let people know if I shot something important, and I always tag makeup artists and stylists, too, so that they get credit for their work.

WWD: Bucket list?
E.B.: I really want to go to India, to Jodhpur. It’s beautiful. I want to go to Peru, Mexico, Costa Rica. I would love to go to Tibet. I’m really interested in the religions of this region and in Asian religions in general.