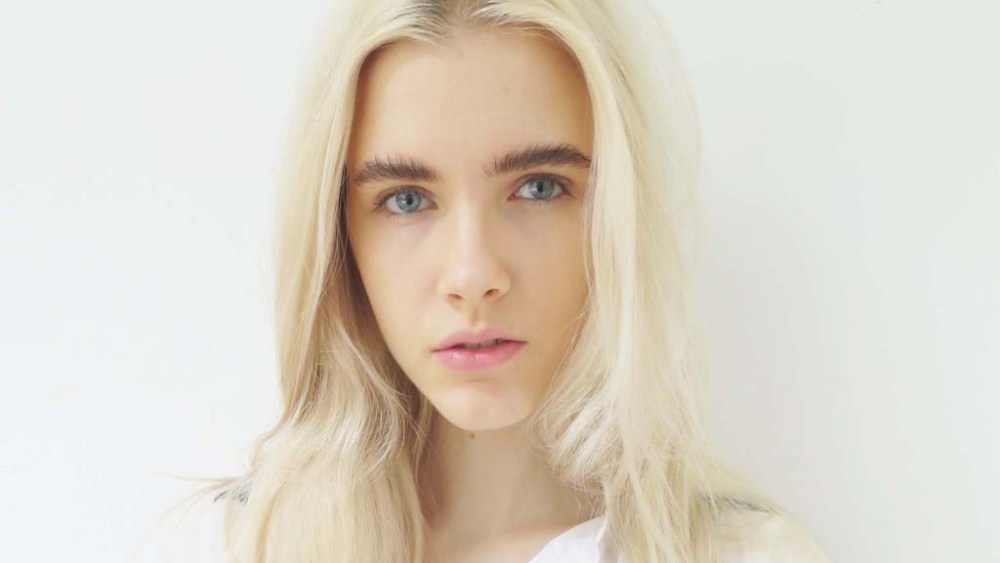 Australian model Gisele Pletzer came to the U.S. a few months ago to walk her first New York Fashion Week, and she’s been living in an apartment in Williamsburg, Brooklyn ever since with 20 other models. That’s right, 20.

“Everyone is like, ‘What the f-ck?’” she said, explaining that the apartment has one kitchen, two bathrooms and five bedrooms, with four girls to each room. “But it’s really nice and overlooks the water.”

“Sometimes, at midnight, there’s a line outside the toilet,” said Pletzer. “I leave special notes for people, like ‘Don’t touch my stuff.’ Once, I did an experiment where I left a container of cereal out to see if anyone would have some. I came back two days later and it was gone.”

Repped by One Management, Pletzer, whose humor and self-awareness belie her age (she’s 20), is just getting her feet wet. With blonde hair and dark brows that lend her a slight resemblance to Cara Delevingne, she’s shot editorials for Nylon magazine, Seventeen and Marie Claire U.K. in addition to walking the spring runways for designers including Timo Weiland and Katie Gallagher. She insists that she loves New York, despite her unusual living situation. “I don’t know if it’s the vibe or the people or what, but I love it here,” she said. “I like to sit in the park and just absorb everything.”

WWD: How did you get started modeling?
Gisele Pletzer: I was in a shopping center and there was a modeling competition happening, but I had no idea about it. I was 17. Someone came up to me and asked me to audition for it, so I did.

WWD: Growing up, did you ever think you might have what it takes to be a model, or have any desire to try?
G.P.: No. You should’ve seen me when I was young. I had the braces, the glasses. I look so different now, and people [from my high school] don’t even recognize me. When I was little, up until I was maybe 15, every single photo taken of me was with my eyes closed. I couldn’t keep my eyes open in photos.

WWD: How did you make your way to New York?
G.P.: I did a little modeling locally, but the market, especially in Brisbane, is really commercial; it’s all beach babes who are very tanned. And meanwhile, I’m like, albino.

WWD: Are your parents supportive of your career?
G.P.: My mom loves it as much as I do. When I have castings, she’ll Google what [client] I’m going to see. I have to send her my schedule every day or else she gets really offended. She’s like, “Make sure you wear this, and go to this one first.” It is so cute, and I wouldn’t be able to do it without her.

WWD: And your dad is a band tour manager. Has that affected your taste in music?
G.P.: Growing up with a dad like him, I like to listen to mostly old-school music, not like… Justin Bieber. The majority of his life he’s managed different bands, so he’s not home that often. But I always ask him for the band T-shirts he gets. I have a stash. I love them so much.

WWD: How was your first fashion week?
G.P.: It was so hectic — when you go home, you’ve either got another casting or you just sleep. But I still enjoyed it so much. I didn’t expect to book anything; I said whatever will happen, will happen. I went to a casting and they said they had seen 700 girls in two days. And I was like, ‘Whaaat?’ I felt like, how would I even stand a chance?

WWD: You’ve got great, strong eyebrows. Do makeup artists ever try to mess with them?
G.P.: Oh yes. I’m always like, “Back off. Don’t even go there.” Sometimes they’ll approach and say, “Can we just tweeze this one hair?” And I’m like, “No, give me those tweezers. I’ll put them down for you.” When I was younger, there was this phase of having really thin eyebrows. But after that, I just let them run free. I brush them. They’re like, my little friends.

WWD: What’s been the highlight of your career so far?
G.P.: I shot Marie Claire U.K. and they flew me to Malibu. I was so happy. I was like, “Is this real life?” It was my first time to California, and seeing the clothes.…That was one of the best moments of my life. I was like, I’m so blessed. Stuff like this doesn’t happen to me.

WWD: What are some of your modeling goals?
G.P.: Of course there are heaps of people I’d love to work with, like Steven Meisel and Karl Lagerfeld. I think what would be surreal for me is walking down the street and seeing myself on [a billboard] or something. At the moment, modeling is all I can see. I know I can’t do it forever, but I think I’ll do it as long as I actually can, or until someone says, “You can’t do this anymore, go away, stop coming.”