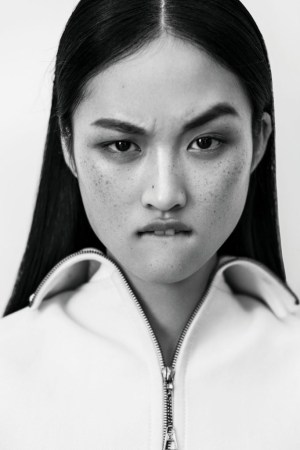 Jing Wen’s effortless beauty took center stage during a recent photo shoot for WWD in Long Island City. With a soft-spoken and easygoing nature, the 21-year-old Chinese model sat in front of Luke Abby’s camera and proved she’s a true natural at posing. That must be why Wen recently landed one of four covers of Vogue China’s June issue, in addition to the March cover of Elle China and shoots in Teen Vogue, Harper’s Bazaar, Elle Italia, i-D, Self Service and more. She also strutted the runway of Louis Vuitton’s recent cruise show, but says she doesn’t have a preference for runway versus editorial work. “With the styling, you [become] someone else,” Supreme-repped Wen said of transforming for each editorial. “And for runway shows, it’s the same….You have to be someone else. Well — you have to be yourself, but also someone else.”

WWD: How did you get discovered?
Jing Wen: A friend of mine was a model. Two years ago when I finished my high school, I met her agency and then they signed me.

WWD: Growing up, did you ever think you could be a model?
J.W.: Not really. In China, to them, I’m not [considered] beautiful.

WWD: That is upsetting to me. What are the standards for female beauty there?
J.W.: Do you know Fan Bingbing? Girls [like her] with big eyes are considered beautiful. It was kind of hard when I first started modeling.

WWD: Your English is great. How did you learn?
J.W.: I learned by myself, while traveling. When I started traveling, I had no choice. I had to speak English.

WWD: What was it like growing up in China?
J.W.: A lot of studying. [In China], fashion is so different — it’s like another world. When I started modeling, [that’s when] I started to look at magazines. I have one older sister, she got married already. She’s 26. I go home every six months.

WWD: What does your family think about your career?
J.W.: My mom, she doesn’t really like it. I wanted to start modeling right after high school, so I didn’t go to university. My mom was really angry about that. We were fighting about that all the time. But now, it’s so much better than before.

WWD: When you show your mother your magazine covers, is she impressed?
J.W.: She thinks it’s alright, but she says, “Don’t be naked or topless or anything like that.” I can understand what she’s thinking.

WWD: If you weren’t modeling, what do you think you would be doing?
J.W.: I would be studying. Maybe after modeling I will go back to school and learn styling or photography. I love taking photos.

WWD: What do you like to do in New York City when you’re not working?
J.W.: I love it here, but the winter is too crazy. I go to museums, go to the park, hang out with my friends, or just stay home and watch a movie. I’m kind of boring.

WWD: Your hair, by the way, is beautiful.
J.W.: Before, it was longer, so much longer. Last season, at the Louis Vuitton show, they cut my hair. The hairstylists must hate me. I can’t even imagine. This kind of hair is so annoying. It’s too straight, too heavy, too dark. It’s hard to do something else with it.

WWD: Have you noticed more diversity on the runways, especially in terms of Asian models?
J.W.: Asian girls are coming up, and [there are] more Chinese models than before, but it’s still hard for Asian girls to get shows. In one show, they’ll only [cast] two or three Chinese girls.

WWD: How do you deal with the craziness of the runway season?
J.W.: Sometimes, I can feel my body is not feeling well. Fashion week is so crazy. Sometimes I have four shows in one day, I’m running around, I don’t have time to eat. Sometimes we do a fitting until 3 or 4 a.m. and [the day after that], sometimes I worry I’m gonna pass out.

WWD: Does it ever get lonely or have you made lots of model friends?
J.W.: I wasn’t the girl who loves traveling. Sometimes, that feeling when you wake up and you have no idea where you are…you feel kind of sad. But now, it’s fine and I love traveling and meeting different people. You make some new friends but then after, they just leave, and you can’t meet them anymore.

WWD: Can you think of any funny moments from the runway shows?
J.W.: Definitely the Chanel show. We had to walk in a big restaurant then after the show we ordered drinks and stayed there as a group of friends. It was really funny and impressive at the same time.

WWD: In your two years of modeling, do you have a favorite memory or experience that sticks out among the rest?
J.W.: My favorite experience was when I worked with Mario Sorrenti for the CK One fragrance [campaign]. I had to kiss a girl, which was my first time, but working with the entire team was great fun.

WWD: Are there any women in the industry that you look up to?
J.W.: Gong Li is my favorite Chinese actress. Elegant, classic and beautiful.

WWD: What are some of your goals?
J.W.: I think I have a dream come true already. For the future, I can’t think about that. I don’t want to knock myself. I just enjoy this moment.