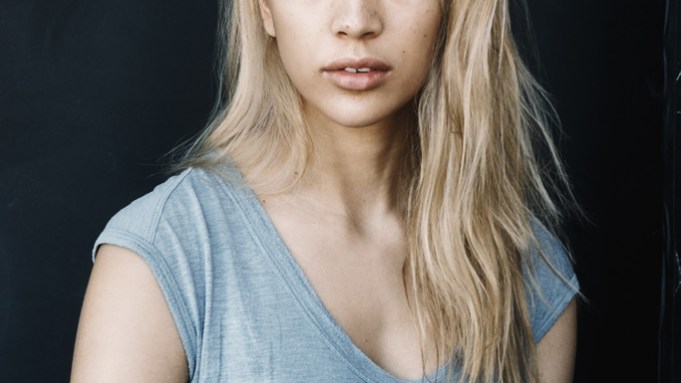 “Obviously, to me, they’re just my parents,” said Kenya Kinski-Jones on a recent afternoon, having touched down in Brooklyn after spending a weekend in upstate New York with her boyfriend, actor Will Peltz. The 22-year-old Los Angeles-based model and animal activist — who graduated in May from Loyola Marymount University, where she majored in English — was talking about her father, music producer Quincy Jones, and her mother, actress and former model, Nastassja Kinski. “I grew up not at all in the spotlight. I think my parents really kept things down to earth for me.” In addition to landing editorials in Vogue Spain, Teen Vogue and Harper’s Bazaar, Kinski-Jones is also one of the stars of the buzzy new Calvin Klein Jeans campaign.

WWD: How did you start modeling?
Kenya Kinski-Jones: My mom was actually the one who got me into it the most. Around age 14 or 15, we went to an acting and modeling agency. Before that, I had never really thought about it. I guess my mom had known Bruce Weber previously, and she took me to a shoot. I was still kind of shy and not sure about it. He snapped some photos and a couple of months later, we did a shoot together for Vogue Spain. It was a really amazing experience.

WWD: Do your parents give good career advice?
K.K.J.: My dad, whether it’s school or my career, is always like, “Put in the work.” My grandpa used to say, “If a task has once begun, never leave it till it’s done.” Growing up, when I was in my awkward stages or shy, my mom would always say, “Go do it! Go try it!” She always wants me to jump into things and not be scared. It’s better to try than not to try at all.

WWD: One of your first shoots was with Karl Lagerfeld and Carine Roitfeld for Harper’s Bazaar. What was that like?
K.K.J.: I couldn’t believe it at all. I still don’t even believe it. I’m really grateful for the opportunity. It was so cool to be able to be part of the creative process and watch them work. Karl had a good sense of humor. It was interesting because it was really quick, but it was awesome.

WWD: The new CK Jeans campaign is getting some buzz for its au courant themes: dating apps and sexting. What was it like to shoot?
K.K.J.: With apps like Tinder and even Instagram, there has been such a blend of technology and daily life, especially with dating. With texting and social media you can create this whole other dimension of yourself and your life. This is the generation that uses Instagram and texts most often, so naturally certain aspects of sexuality and dating are going to somehow fall into that. Being able to shoot it with my boyfriend, Will, made everything so much more comfortable. There was never any awkwardness that we had to break through. It felt like we were able to push the limits because our relationship is real.

WWD: You also recently shot the campaign for Diane von Furstenberg pre-fall.
K.K.J.: We went to New Mexico to a Native American reservation, Taos Pueblo, where I guess usually they don’t let outsiders come into the community. They were nice enough to let us come in. It was amazing. They don’t have any electricity or running water and the houses are made of clay. It’s very traditional. The nature was so beautiful. It was really special.

WWD: Apart from your modeling career, how do you plan to apply your studies?
K.K.J.: I think in my dream world I’d like to combine different things — maybe write a column for a magazine and incorporate that with my passion for animal advocacy. Now I’m free from classes and I can try to blend the two. The good thing with writing is that you can incorporate it into different things.

WWD: What are some of your goals?
K.K.J.: For the past four years, I’ve been dedicating my life to school, and I had a full-time schedule. I was really focusing on that. But now that I’m done, I’m just ready to focus on my career and also get involved with organizations for animal advocacy. It’s something I’m really interested in. Jane Goodall is one of my biggest heroes. She has an institute that I’d like to get involved with.

WWD: How did you become so passionate about animals?
K.K.J.: Ever since I was a little girl, I’ve had such a passion for protecting animals and their well-being. Growing up, we had eight dogs, five cats and two horses. The neighbors were always calling. It was crazy — like a zoo. I also grew up riding horses. That was a huge part of my childhood; I did jumping competitions.

WWD: You said you typically spend your summers in New York. What do you like to do here?
K.K.J.: L.A. is so chill, but here in New York, you can walk out on the street and anything can happen. Just walking around the city is so fun and exciting for me. That probably sounds so “L.A.” — like, “Oh, what an idiot, she likes to walk around the streets” — but it’s just really exciting.