The 18-year-old Floridian did her first runway season in September, walking in 12 shows including Erdem, Miu Miu and Prada. 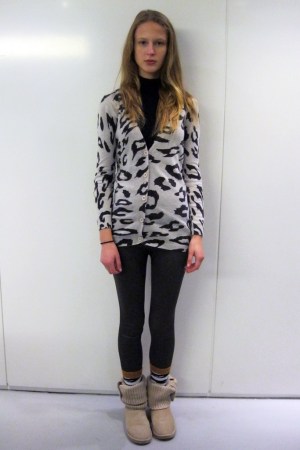 It’s not every day that a model is cast in a major ad campaign without so much as meeting anyone involved. Megan Will has earned some well-deserved bragging rights in that department — and for Prada, no less. Casting director Russell Marsh was blown away upon the mere sight of her Polaroids, booking the 18-year-old Floridian on the spot. “I get a call from my booker: ‘Can you go to Milan tonight? Prada wants you,’” Will says. The campaign, for resort 2012, catapulted her into the big leagues. She just did her first runway season in September, walking in 12 shows including Mary Katrantzou, Erdem, Miu Miu and, of course, Prada.

You’re from Florida. How are you handling New York’s cold weather?
I’m not used to this at all. At least I’m not too far from home compared to most girls. I feel bad for the girls here who can’t speak English. My roommate’s from South Korea and she can only say “hi” and “bye.” It’s not easy navigating a new city when you speak the language. I can’t image when what it would be like if I didn’t.

And you’re only 18. How old were you when you got started?
I got discovered at 14 but I wasn’t ready to fully commit since I was in school. I just started taking it more seriously last year after I started doing online school.

How were you discovered?
Keith Fox is this scout who works for Elite and Wilhelmina and Ford and all of the big agencies. He found me walking in a mall. At first I was like, “No, thank you” and kept walking. Initially, I thought it was really sketchy. He kept asking me for my number so I gave him my mom’s. He called her and my mom actually had him background checked, like by a private investigator.

What a protective mom!
I know! He had this event, the Fox Models Model Search Event, with all these new girls he had found and I guess you had to pay a little bit of money to come and she wanted to make sure it wasn’t a scam. So I went and they saw me and wanted me to come to New York. That’s kind of how I got started. After they saw me in New York, I got signed.

What was it like coming to New York for the first time?
It was so intimidating. I mean, I was 14 years old! I just remember being so nervous, meeting all the bookers and the other models. They just took my pictures and got my measurements and sent me out on test shoots.

When did you start to take your job as a model seriously?
Last year. It was the second week of school and I was sitting in class. I got a text from my mom saying, “You have to get on a flight at three.” That’s all it said. It ended up that the designers from Rag & Bone wanted to see me but it wasn’t for fashion week, even though that’s when the castings were going on. I still don’t know what it was for to this day! I was confused but I went. When I got up there, my agency just decided to send me out on all the fashion week castings since I was there anyway. So I did some presentations because I didn’t know how to walk then. I was supposed to be gone for two days — it ended up being a month-long trip.

How did your teachers react to that?
I ended up having to switch to online school after that. Then this June I came back to New York because I was done with school. I just came up to do some fit model jobs and get more experience.

And how did the Prada campaign come about?
On July 9, a week before my 18th birthday, I got a call and my booker’s like, “Can you go to Milan tonight? Prada wants you.” So I went. I had never met the casting director but they said, ‘Russell Marsh saw your digitals and really liked you.’”

What was the day like?
It was absolutely crazy. I literally got off the plane, got to the hotel in the middle of the night and the next morning was the shoot. The whole day I just kept asking myself, how did this happen? I never went on a casting for them. I have no big experience. But what made it easier was the other girls there.

There were a few other relatively new girls in the campaign, right?
Yeah. It was like their first big thing too so I guess that’s why. But that made me feel better, because you know that you’re not the only one who’s nervous.

After that, you got booked for your first runway shows. Did anyone give you any advice or tell you what to expect?
They basically just said you’re not confirmed until you’re on the runway. I kept having to tell myself that when I was getting my hair and makeup done for the show so I wouldn’t get excited or anything.

Does that really happen?
I saw five girls get cut the day of the show that were already in hair and makeup. One girl told me it was her eye color, but I think it has to be because of the look — they just want to cut your look. You know, if they don’t want the outfit in the show, they don’t need the girl in the show so you can’t take it personally.

Did you have to work on your runway walk?
With me, it was the confidence. You have to feel like you belong here. You have to have that confidence in your face. Another thing that was difficult for me was training my eyes where to look, if that makes sense.

Have you ever tripped?
No but I was so scared of falling at Miu Miu. Part of their runway was four flights of stairs and you couldn’t use the railings because you had to walk down the middle. I was completely terrified!