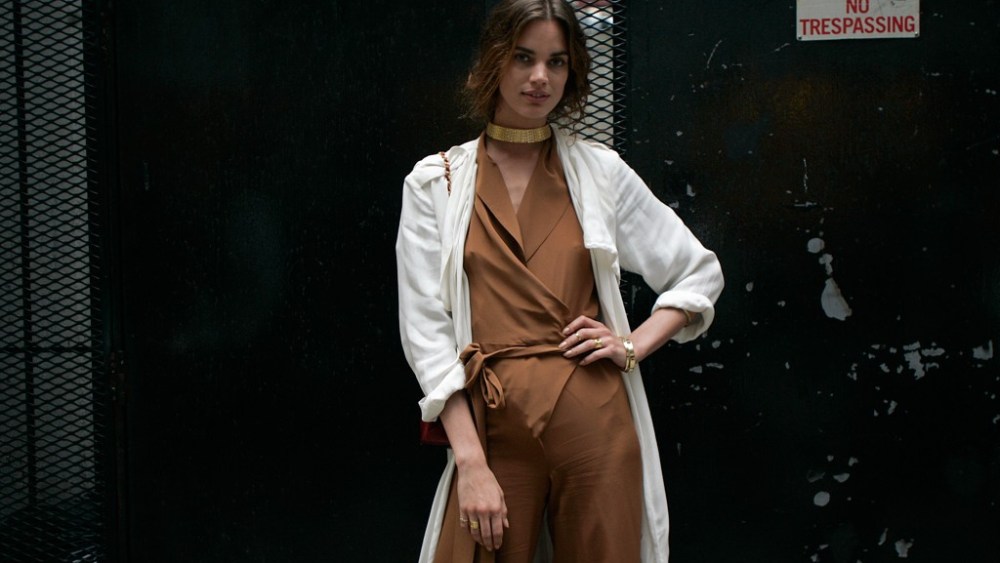 “Wait, is that coffee in the machine over there?”

“It looks a little tricky.”

With that, Rianne ten Haken had made her entrance into WWD’s Manhattan offices. Born in Lelystad, Flevoland in the Netherlands, the Dutch model has had a long, illustrious career, having been discovered at age 14 and winning the international Elite Model Look contest a year later. She made her mark after walking the Marc Jacobs spring 2004 runway at 16 years old among the likes of Gisele Bündchen, Kirsty Hume and Isabeli Fontana, igniting a fast-paced, whirlwind career in which it often proved difficult for her to stop and smell the roses. “At that time, I was happy to be working, but nothing registered,” ten Haken said. “I was meeting all these people, but I came straight from the countryside of Holland, you know? Afterwards, with the knowledge I have now, I’m like, ‘Whoa, I did all of that?’ It’s just funny; it’s a trip.”

Now all of 27, ten Haken’s career is nowhere near a halt — she just walked Jean Paul Gaultier’s grand finale ready-to-wear show in Paris; starred in Lenny Kravitz’s steamy new music video for his single, “The Chamber”; and is currently the face of Max Factor’s fall campaign. She’s also funny, loquacious and — for someone whose modeling résumé includes the Pirelli calendar, back-to-back covers of Vogue Italia and Chanel, Versace and Givenchy campaigns, among others — refreshingly grounded. Ten Haken, repped by Women Management, talked to WWD about self-identity in the modeling world, working with Gaultier and her long-term dreams of moving to the country.

WWD: You’ve been modeling for more than a decade. How did you get discovered?
Rianne ten Haken: It was funny — one week I went shopping with my mom. It was a vacation week for us and we went to different cities. In that same week, two people scouted me on the street. One of them was the director of Elite at the time, and he was like, “Do you wanna do the [Elite Model Look] contest?” My dad was like, “Yes, of course!” But my mom was a little more reluctant. I won the international finals and then I started working in Holland.

WWD: You were only 15 at the time. Then what?
R.T.H.: In September of 2003, when I was 16, I moved to New York to do fashion week. I moved here with another Dutch girl and I had an amazing agency that took care of me.

WWD: What was it like living in New York at such a young age?
R.T.H.: I had no clue, girl — I had no clue what was going on. I got so caught up in work right away that I didn’t really have time to realize what was going on at the time. I was walking [the Marc Jacobs runway] with Gisele [Bündchen], and I had no clue who any of these people were. I was only worried about how I was going to make it to the end of the runway and back without lookin’ like a fool [laughs]. That’s really when things took off for me.

WWD: Growing up in Holland, did you ever have an inkling that you could be a model?
R.T.H.: I mean, listen: I grew up in the middle of nowhere on a farm. There were only cows around. There was no Vogue. There was no Fashion TV. There was none of that. Also, in general, life in Holland is good — even if you’re just a secretary, you can have a good life there. The need, the push to be financially successful…I never had that push, ever.

WWD: How do your parents feel now about your career?
R.T.H.: They’re superproud. But I think it’s a love-hate situation, too. They obviously want me to do well and work, but they also want me to move back, especially my mom. Every time I’m in Europe, she’s like, “Are you coming home?” I’m the middle child; my younger sister works with kids at a school and my older sister is a detective.

WWD: When you’re not working, what’s your life like in New York?
R.T.H.: I’m always hopping on a plane [for work]. When I get back to New York, all I wanna do is work out, go to my restaurants, see my girlfriends and hang out. I love Miss Lily’s in the East Village. It has so much flavor. That’s one of my spots. And I work out a lot — I’m a little bit of a workout fanatic. I do a lot of yoga, I box sometimes, I used to run. I love cycling. I love music and culture and art.

WWD: And you used to live in Paris for a while, too.
R.T.H.: I lived in Paris for three years. I was dating a photographer back then, so we would spend half the time here, half there. We were jet-setting a bit. That was actually really nice. I love Paris. If I could live there now, workwise, I totally would. New York is cool, but I’ve lived here 10 years, off and on. I live in the West Village, it’s nice and quiet. But you know, at heart, I’m a European. I see myself living there ultimately.

WWD: Do you have a favorite job, one that stands out among the rest?
R.T.H.: You know, it’s funny, because when I was younger, I was starting to take everything for granted. It’s all given to you. You work with all these amazing people, but you’re simply too young to be able to register what’s happening. But last year, Jean Paul Gaultier booked me for his new perfume — for the worldwide campaign — and that was one of those moments. I’ve flown myself out to Paris every year for his shows, and you eventually become part of the family. And then he gave me this opportunity, and for me, that’s one moment that really stood out. With him, the relationship becomes more than just work.

WWD: Having worked in this industry for so long, are you genuinely interested in fashion?
R.T.H.: For sure. I think fashion is great, and I think it’s fun, but I don’t think it’s as serious as people believe it is. I see a lot of people being very stressed out about fashion. But I love fashion because it’s the only way to really express who you are — not the only way, but appearance is the first thing that people see. And more and more as you get older, you realize more how people see you. I definitely have my interest in it, but sometimes I’m wearing sweatpants and a T-shirt too [laughs].

WWD: Tell me about the Lenny Kravitz music video. It’s pretty sexy.
R.T.H.: That was a trip. It was my first time doing a music video. I’ve done perfume commercials and stuff like that, but once you have to interact with somebody like Lenny Kravitz, you’re like, “Oh my God, he’s just too good to be true.” It was a whole different ordeal. He’s a superstar. So talented, so nice. Pretty pictures are great, but I’ve been doing those for so long that I’m on automatic pilot when I’m on a shoot. But with videos, you’re stepping outside of your comfort zone. You’re acting; there’s a script to follow. I wasn’t speaking, but my movements were scripted. It was really an eye-opener. I think I really wanna pursue that more in the future. It’s a lot of work, though! It was two nights in a row of shooting overnight. I was feeling all sorts of crazy after that shoot.

WWD: Can you recall one of the funnier moments you’ve experienced on a photo shoot?
R.T.H.: One time, I was shooting for Flare magazine, and they tried to make me look like an astronaut. I was flying in the air with a harness on. But the harness only went on [my body] one way, so I was feeling very stiff and uncomfortable — it was pulling on me and I could only move from left to right. I had bleached eyebrows, too, and I was just like, “OMG, what am I even doing right now?”

WWD: What are some of the lessons you’ve learned?
R.T.H.: I think you really have to detach yourself from this business in a lot of ways. My agent is selling a product: I have brown hair, blue eyes and I’m this tall. That’s going to fit a certain profile for clients. What I’ve really learned about myself is to not get affected. You have this whole different reality of how you see yourself: This is [my modeling persona], and this what I’m really like. I was 18 years old, and all of the sudden, I wasn’t doing all the shows anymore, and I was like, “But what do you mean? I look the same!” I did not know how to process that. But it’s the nature of every business. You can’t always continue to use the same faces for products. But that was a reality check.

WWD: Do you have any goals you’d still like to achieve in modeling?
R.T.H.: French Vogue. I’ve done American, Spanish, German, Dutch, Italian Vogue…but never French Vogue. This needs to happen before I die!

WWD: How do you envision your life in the far-off future?
R.T.H.: I want to get a nice little country house somewhere warm and grow tomatoes.