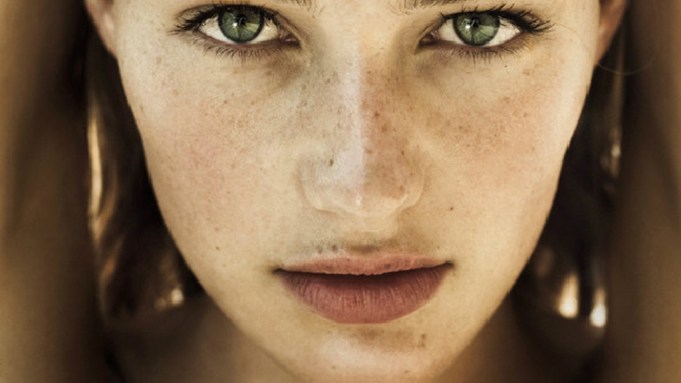 Sanne Vloet is in the midst of her breakout runway season. As of this writing, the 19-year-old has walked 27 shows (and counting) on the spring runways in New York, London and Milan, including Oscar de la Renta, Rodarte, Jason Wu, Tom Ford, Dolce & Gabbana, Bottega Veneta, Marchesa and Ralph Lauren, which she opened. (She also appeared on the cover of the Sept. 9 issue of WWD in a close-up shot from the Carolina Herrera runway.) Despite her age, Vloet is not exactly a newbie to the biz — she had previously walked several shows in Europe and even lived in Paris for work — but this season brought her to New York for the first time, and she managed to stop by WWD’s offices between castings.

Hailing from the small town of Donkerbroek in the Netherlands — not exactly an epicenter of fashion, with a population of about 1,872 as of 2011 — Vloet was a competitive gymnast before she was a model. During high school, she was applying for work at supermarkets, and she thought she might attend university in Amsterdam to study social sciences and business. But after being discovered on “Holland’s Got Talent” in 2009, her life changed pretty drastically. “The fashion industry is totally different from how I thought it would be,” she said. “Everything is so last-minute, changing every second. I wasn’t really used to that.”

Vloet also has a suggestion for the fashion industry, if anyone’s listening: “They should have fashion week in one building,” she said with a laugh. “It would be easier for everybody. That would be great.”

WWD: How did you start modeling?
Sanne Vloet: I was discovered when I was 14. I auditioned for “Holland’s Got Talent.” I was doing gymnastics and acrobatics — it was a sport I trained for every week. A scout saw me on TV and sent me a message, but I was still in school. So I started doing one photo shoot a year [as a test], and I really started liking it.

WWD: When you were younger, had it ever occurred to you to give modeling a try?
S.V.: No, not really. I was always a really small girl. That’s what’s really weird: I went through my growth spurt really late [Editor’s note: she’s 5 feet 11 inches now.] And my focus was more on sports. I was really competitive with it.

WWD: Is your family supportive of your new career?
S.V.: They’ve been really supportive of me from the beginning. I live quite far from Amsterdam and they would always bring me there [to the agency]. Sometimes my mother is more into it than me. I have one brother, he’s 17. We grew up really normally in the countryside — everybody bikes to school. The place where I’m from — it has nothing to do with fashion, so everybody’s really excited to see what I’m doing.

WWD: How do you manage to stay centered during the craziness of fashion month?
S.V.: It’s a bit of a roller coaster. Sometimes it goes really fast, but it can also go really slow, if you don’t get any bookings for a while. Sometimes you’ll get canceled for shows, and other times you’ll get booked at the last minute. And when you’re traveling alone, all those things can feel a bit heavier. But, that’s fashion week I guess.

WWD: Have you made a lot of friends with other models?
S.V.: I meet a lot of girls. The vibe is really good. Everybody’s tired and lazy, but everybody’s really nice. I think there are too many girls to ever feel competitive. If you’re gonna fight with each other, you’re gonna be alone in the end.

WWD: What have you learned in all of your experiences?
S.V.: I remember when I was 15 and I had an interview for a job in a supermarket. I was really nervous. And now, if I have to do an interview — because for castings, we do them every day — it’s becoming normal and I’m getting more confident. You learn how to represent yourself.

WWD: Has having access to such great fashion influenced your sense of style?
S.V.: It gives you another point of view when you’re in the business [of fashion]. You want to experiment a bit more than before. I love to shop.

WWD: What are some of your hobbies outside of modeling?
S.V.: I love festivals. I’ve only gone to some in Holland, but I would love to go to Coachella. I really like Mumford & Sons, and I like deep house music — it depends on my mood. I’m also a huge fan of television series, like “Sex and the City” and “Gossip Girl.”

WWD: Any dreams or goals in modeling?
S.V.: I would love to work with David Sims or Craig McDean. I did some editorial work in Europe but I hope there is more to come. And the Victoria’s Secret show, of course.