Though Sarah Abney looks like she could be Nordic, she’s actually a born-and-bred California girl. 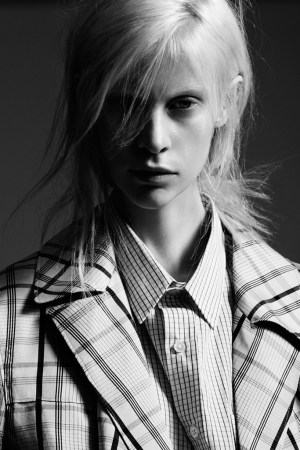 Though Sarah Abney looks like she could be Nordic with her pale skin, light eyes and 5-foot, 11-inch frame, she’s actually a born-and-bred California girl. “Every time I say I’m from San Francisco, people are like, ‘What?’” she says. (Her hair, dyed platinum — almost white — is naturally a darker shade of strawberry blonde.) “I have a bit of Irish in me.” The 23-year-old moved to New York two years ago, working odd jobs in retail and hospitality while booking modeling gigs on her own account before getting signed to Fusion Model Management last summer. In addition to landing an editorial for Interview magazine, she made a strong statement on the fall runways by closing both the Marc Jacobs and Alexander McQueen shows.

It also can’t go without saying that Abney bears a striking resemblance to another model 27 years her senior: Kristen McMenamy. “I was at the McQueen show and Pat McGrath was like, “You’re a mini Kristen!” It’s a comparison the sweet, soft-spoken model enjoys hearing; she cited the 50-year-old as someone she looks up to in the business. (Quick, somebody book them together on a shoot ASAP.)

WWD: How did you start modeling?
Sarah Abney: I was always so tall and really skinny. People were just like, “You should model.” I felt like it was always kind of in my path. I had an agency back in San Francisco; I was signed with them for two years and then I decided after the contract was over that I didn’t want to re-sign.…After that, I kind of freelance modeled locally in San Francisco, but everyone would say, “You should be in New York. That’s your market.”

WWD: When did you make the move here?
S.A.: I was going to school during the time and I wasn’t really sure what I wanted to do….I was taking general ed [in college] and just floating around in San Francisco. I wanted to move out of my parents’ house. I was 21 at the time. So I decided to move to New York and try to pursue modeling. I moved here two years ago and had just been working odd jobs, and then I got scouted here about six months ago.

WWD: What sort of odd jobs?
S.A.: When I first moved here, I worked at the Dream Downtown’s club — called PH-D — as a hostess. But I’m not a club girl at all. It was intense. I didn’t start work until 11 p.m. every night. I did that for like, six months and then I quit. The last job I had was at this vintage shop called Narnia. A lot of cool people would come in and sometimes I would get [modeling] work through people I met.

WWD: So you booked some modeling jobs on your own before getting signed?
S.A.: I booked some look book jobs for up-and-coming designers. The biggest job I ever booked on my own was for this music festival — The Kills were playing and my picture was on the wall. It was fun.

WWD: How did you eventually get signed?
S.A.: I was at a festival upstate in Woodstock with my friend, and his friend was a photographer. She came up to me and was like, “I can’t believe you’re not signed, that’s crazy.” She took some photos of me and sent them to a bunch of agencies in New York. I had meetings set up the following week. At Fusion, everyone was so excited about me. It was funny, because I went into Fusion [for an open call] when I first moved here. But I don’t think I was quite ready yet.

WWD: You closed the Marc Jacobs show this past fall season. What was that like?
S.A.: I was so nervous. I knew I was confirmed, but during the rehearsal they passed out numbers. They gave me #54, and that was the last number. I was like, “Me? Out of all the other girls?” I wore a long pink lace dress. The shoes were so easy to walk in, but the runway was so long with these bright lights.

WWD: Did you get to interact with Marc at all?
S.A.: I remember during my second fitting, he came up to me and was like, “Where are you from?” He said, “Oh, I love San Francisco.” When I left, he was like, “Thank you, Sarah!” I thought it was so nice that he remembered my name. That made me really happy. That was the biggest show I walked in New York.

WWD: How was Europe?
S.A.: I went to London and I did Giles. And then in Paris I did Rick Owens, Dries Van Noten and closed Alexander McQueen….That runway was crazy. I had to practice three times. I was like, “I don’t wanna mess this up.”

WWD: Did you make friends with other models?
S.A.: Everyone was really nice. I became friends with a lot of the new girls because we’re all in the same boat. I also met girls that had been doing their fifth season, and they would give me advice and help me out. That was cool, too. You always hear that the girls are catty, but that wasn’t my experience.

WWD: Is your family proud?
S.A.: My mom was almost in tears with the Marc Jacobs stuff. After this year, if modeling didn’t take off for me, I was thinking about pursuing other things. It’s expensive to live here. I love New York City, but I don’t think I would stay here if it wasn’t for modeling. I think I’m a West Coast girl. But I am starting to love it more now that I’m doing what I want.

WWD: Do you have any role models?
S.A.: I would say Kristen McMenamy. She is iconic. She’s still at it. She’s been doing it for over 20 years. I think she has such a cool personality. She’s always stayed true to herself.

WWD: Has social media been important for your career?
S.A.: I just got an iPhone for the first time ever this year. I was always against social media, but now it’s really fun and it’s another way for people to see that you’re not just a model.

WWD: What are some of your goals in modeling?
S.A.: I would love to work with Karl Lagerfeld and do the Chanel shows. I would also love to book a campaign. I’d love to do more editorials for magazines that I look up to, like i-D. I want to be able to go to a tropical island and do an awesome shoot. I would love to just be able to travel more. I’d love to have a career that I felt proud of.