The 21-year-old model is well on her way to making her mark as the first Indigenous Australian on the radar of the international fashion industry. 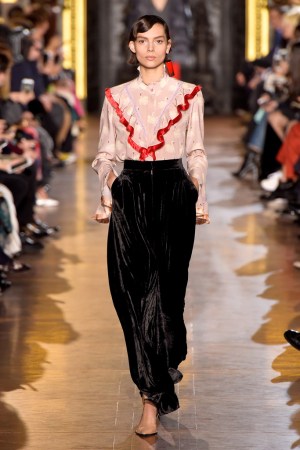 SYDNEY — In her Instagram bio, Charlee Fraser describes herself as a “model in the making.”

The 21-year-old from Newcastle, a harbor city located two hours north of Sydney, is well on her way to making her mark as the first Indigenous Australian model to make the radar of the international fashion industry. One of the top new faces of fall, Fraser walked in 40 of the season’s major shows, from Alexander Wang to Prada, Balenciaga, Chanel, Dior, Lanvin, Givenchy and Céline.

It wasn’t her first attempt at the international stage.

In September 2013, shortly after being scouted by Newcastle photographer Rob Eyre and signed initially to Sydney’s eMg Models — Fraser is now repped globally by IMG — she made two fleeting New York Fashion Week appearances, walking in the spring 2014 shows of Tia Cibani and Chadwick Bell. A steady flow of work back home in the interim has included shows for the David Jones and Myer department stores and campaigns for Camilla, Fella Swim and Becca Cosmetics.

But there was something about Fraser this season that caught the eye of key casting directors such as Ashley Brokaw, Anita Bitton and Lotta Volkova. Much online speculation has focused on the Louise Brooks-style bob cut by Guido Palau before Wang’s show, which gave a cool edge to Fraser’s classic doe-eyed beauty.

“There is no knowing how my season would have played out if my hair remained long, but I definitely feel that my haircut got me noticed,” says Fraser, who has been working nonstop in New York since the shows wrapped on yet-to-be-disclosed projects. “Walking for such large, well-known brands was epic. It’s crazy — when you hear stories of girls who have walked these amazing shows during a season and now having done one, I know the exact feeling. I’m now one of those girls. Just being in the same room with some of the designers was magnificent. They’re so talented and creative. It’s really inspiring.”

Only two Indigenous Australians have appeared on the cover of Vogue Australia in the magazine’s 56-year history — Elaine George in 1993 and Samantha Harris in 2010.

But things could be on the brink of change. Born to an Indigenous Australian mother who hails from the Awabakal people of the midnorth coast of New South Wales and an Australian father, Fraser is one of a growing number of Aboriginal and Torres Strait Islander models who are now being signed to local model agencies.

Alongside pink-haired Chinese-Australian Fernanda Ly, a Nicolas Ghesquière muse, Fraser finds herself at the vanguard of an emerging cadre of ethnically diverse Australian faces who are challenging the “Aussie beach babe” stereotype personified by names such as Elle Macpherson, Gemma Ward and Abbey Lee Kershaw.

“The Australian fashion industry has never been more open and willing to represent Indigenous talent and with that, I believe every opportunity is achievable, as it is for anyone, with hard work and dedication, just like any other career,” says Fraser. “My success isn’t measured by my heritage. All I can hope is that I’m a role model to others and not only to represent my country and my heritage, but to bring awareness to building that bridge between ethnicity and the fashion industry.”