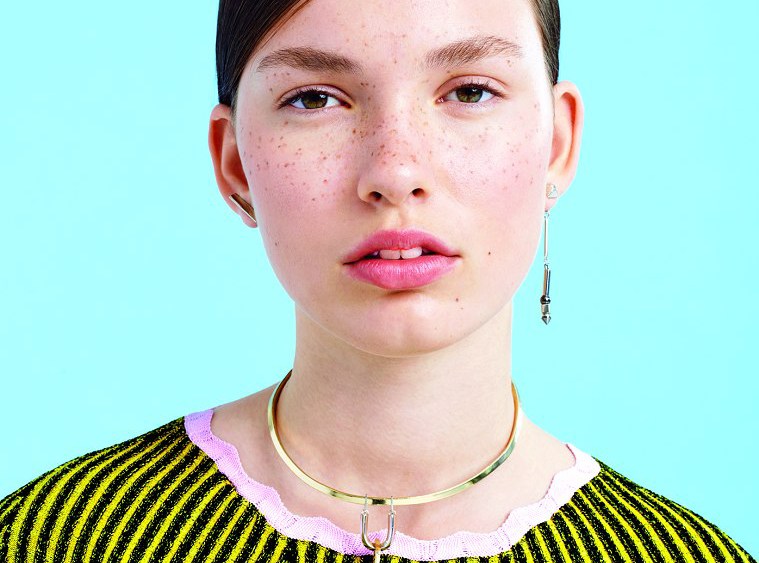 There’s an image from the Armani Exchange spring 2015 campaign in which two female models are pictured standing with their knees bent, one sitting atop the other’s lap. Shot by Cass Bird, it’s a humorous — if slightly puzzling — photograph that was seen on posters across Manhattan, one Freja Jeppesen said she didn’t think twice about at the time. “The photographer made us do that funny pose,” she said. “We didn’t really think much about it because she was taking so many photos. But I got a lot of comments from people about it. It’s definitely a special picture.” At only 15, the Danish expat, who counts Anna Ewers and Natasha Poly among her favorite models, moved to New York alone to embark on a modeling career. Now 16, Jeppesen is still getting her feet wet, but has already landed editorials in Elle Italia and Teen Vogue.

Freja Jeppesen: I was scouted in Denmark while shopping when I was 13. I was alone and my mom was in another shop nearby, and I was like, “No. I don’t think so. Is this a joke?” I took his business card anyway. My mom was like, “Maybe we should call them and see.” So I went to the agency and they asked me to wait half a year, since I was very young. After half a year, I went back and did my first test shoot. Then I started slowly. When I turned 15 last summer, I moved to New York and started modeling full-time.

WWD: Had you ever considered modeling before you were scouted?

F.J.: I was always the awkward kid, not the one everybody thought was beautiful. I never thought about being a model. People are so beautiful in Denmark. There are so many tall, beautiful girls.

WWD: What was it like growing up in Denmark?

F.J.: I grew up in the countryside. I have a younger brother and a dog. There are a lot of forests and lakes near our house. We were very active. But I don’t miss home that much. The weather is always so gray and cold there, and I really love it here in New York. I’ve been here almost a year, and it feels like home now.

WWD: Was it hard moving here alone at such a young age?
F.J.: It was hard when I came to New York and didn’t have that many friends yet. But the people are so outgoing and so open and I love it here. I used to stay in a model apartment, which was very far uptown, and it’s nicer to have your own place. I recently got a place here with my friend. I’ve been going back and forth [between here and Denmark] since last summer, but I’m mostly based here now. I live near Columbus Circle, which is nice and close to the park.

WWD: What do you like to do for fun?

F.J.: I love hanging out in the park or going to cafés with my friends. I have some friends who are not models, and that’s actually really nice. I just met them around. One is studying film. She was an assistant for a shoot I did. It’s nice to talk about stuff other than modeling.

WWD: Do you plan to finish school?
F.J.: I started school one year early, and I decided to take a year off for work. But I really like it here so I chose to finish school online. All of my friends have just started school. In the beginning of the school year, you get to see your whole class and your classmates and stuff, and I do miss that sometimes. But I always hang out with my friends at home when I go home.

F.J.: When I was younger, I always wanted to be an actress. I still want to, and modeling is a good start. Right now I’m just focusing on finishing school online and modeling. I hope to travel a lot and be happy and have a simple life, make it all work out.