The 23-year-old model from Martinique talks learning how to pose, career advice from Coco Rocha and diversity in the modeling industry. 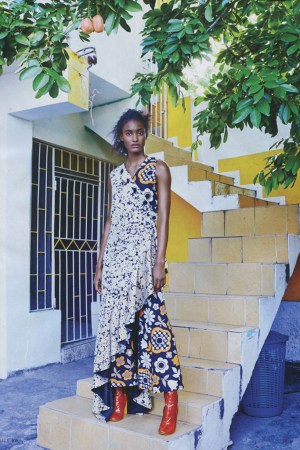 “I knew I was tall and thin, but I never really capitalized on beauty in general,” said 23-year-old Melodie Monrose when asked if she had ever considered modeling while growing up in Martinique. French is the first language of the self-described former shy girl who, in her five-year career, has nabbed campaigns for Gap, MAC Cosmetics, Nars and most recently, Giorgio Armani eyewear. “The most important thing is the connection that you have with the photographer,” Monrose said. “Once somebody makes you laugh and makes you comfortable, your guard is down and you can make beautiful stuff together.”

WWD: What was it like growing up in Martinique?

Melodie Monrose: I’m not objective at all, but it’s a beautiful place. I was lucky enough to spend 18 years of my life there. Life was sweet. You don’t realize how good you have it until you live in a big city all day. I came here and I was like, “Wow. This is the biggest place I’ve ever been. Everything looks like it is in the movies.” I was feeling transported into the world of “Gossip Girl.” Back home, I was a simple schoolgirl; pretty shy actually.

M.M.: In Martinique, there were a few modeling contests from time to time. I went to one from Elite, but I didn’t get picked. Eventually, I was scouted by an agent who found some [of my] pictures. He met up with my parents and me and said, “I think you should start modeling.”

WWD: How did things go from there?

M.M.: Back then, a lot of agencies in Europe [said] they “weren’t interested in ethnic models at the time.” My mother agency still has the [rejection] e-mail to this day. But an agent from Wilhelmina [Editor’s Note: Monrose is with Next Management now] saw my presentation video and was like, “I’m gonna need to sign this girl.” So I finished high school and came to New York. At the time, I was like, “I’m just gonna look at this as a summer job.”

WWD: Were your parents supportive from the get-go?
M.M.: My parents prepared me to be an independent woman, so even though nothing was easy, they knew that they had to send me out into the world at some point. I tried to explain [my work] to them, so that they were aware of everything that was going on all the time. They’ve always been supportive of everything that my brother and I have wanted to do.

WWD: Looking back, how would you characterize your very first modeling experiences?

M.M.: At first, you start doing a bunch of test shoots, and to be honest, I didn’t really know how to pose back then. You kind of stand there and you don’t know what to do. [Photographers] will give you direction. I didn’t speak English, so I had to figure out what “chin down” and “chin up” meant. It was a challenge. You’re just practicing. But I got really lucky. I had one of my first jobs ever for the Ralph Lauren catalogue. My agent was like, “Just watch what the other girls are doing and don’t worry too much.” It wasn’t easy, but I figured it out by just being aware and absorbing my surroundings.

WWD: Did you ever have any mentors?

M.M.: I met Coco Rocha when I started. She was a friend of my agent at the time and she gave me a little training session. She gave me really useful advice that I still have: Don’t take things personally. Just move on. And never be afraid of trying, because that’s what’s gonna make the most beautiful picture. Posing is emotional. Your head, your arm, your fingers; it’s just a feeling. Pick good music in the background, be comfortable, and never be afraid to try anything.

WWD: What are your thoughts on diversity in the industry?

M.M.: When I started, I was one of the few girls [of color] on the runway. I wasn’t that aware, but people would make me aware. People would be like, “Oh, you’re the only black girl in the show.” Sometimes, people would make you feel like you should feel happy about that, but you shouldn’t! I like that people are starting to speak up about it. Bethann Hardison has always been vocal. She started pointing fingers, and I think that’s good, because she’s making things move, and people feel like they have to explain themselves. Sometimes, you have to ruffle some feathers.

WWD: Yeah, it seems like there’s still a lot of work to do.

WWD: What do you like to do in your spare time?

M.M.: I like to bake. I’m a big baker. For my birthday, my boyfriend got me classes at the Culinary Institute. I learned how to make a croissant. It’s super hard. And [it contains] lots of butter. If you knew how much stuff went into your baking, you probably wouldn’t eat any of it. But it’s so good. And I like to be active. My boyfriend lives in Miami so we try to do outdoor stuff. I also like to watch movies. I have to admit, it’s a little embarrassing, but I watched “Pulp Fiction” for the first time and I was like, “What have I been missing my whole life?” It’s such a good movie. Because my boyfriend is American, he’ll give me pop culture references sometimes and I’ll have no idea what he’s talking about. So I’m trying to catch up when it comes to that.

M.M.: I have a bunch of goals. I have this mental list of people who I want to work with. I’ve been pretty lucky so far. I can check off a lot of people in this industry that I’ve been lucky to collaborate with. I would love to be a part of a beauty brand; I’d love to be a spokesperson. I’m obsessed with beauty. I go into Sephora and spend so much money. I’m obsessed with all these YouTube beauty gurus and watch their videos….I could talk about beauty all day. That would be my dream job.