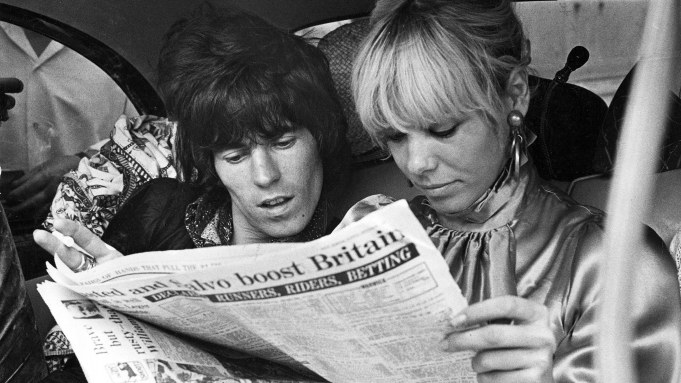 LONDON — Anita Pallenberg, the Italian-German model and the former wife of Rolling Stones founding member Keith Richards, has died at 73.

Her death was confirmed by Pallenberg’s close friend, actress Stella Schnabel, who shared a picture of her on Instagram with the words “I have never met a woman quite like you Anita.” The cause of death is unknown.

Pallenberg was best known for her effortless, bohemian style that captured the spirit of the Sixties and Seventies, when she was spending time at Andy Warhol’s Factory, modeling, and also singing backing vocals for Stones classics such as “Sympathy for the Devil.”

She also dabbled in acting, with roles in the science fiction film “Barbarella” in 1969; “Mister Lonely” in 2007; and a cameo appearance in the popular British sitcom “Absolutely Fabulous” in 2001.

One of her most talked-about film appearances was in the cult film “Performance,” where she played alongside Mick Jagger, with whom she was said to have had an affair.

Pallenberg has always been known for her rebellious spirit: She started modelling at 16 after being expelled from boarding school in Germany. She later met the Rolling Stones band members and became a muse for them after sneaking backstage after a concert in 1965. She went on to develop a relationship with the Stones guitarist Brian Jones, whom she left two years later for Richards.

After struggling with drug abuse and ending her relationship with Richards in the early Eighties, Pallenberg studied for a fashion and textiles degree at Central St. Martins. Her influence on fashion has been ongoing: Last September she walked the runway for Pam Hogg’s show in a gold lamé dress, walking with a cane — and plenty of attitude. She also appeared in a short film by the British designer Bella Freud where she discusses “music, fashion and free thought.”

Freud dedicated one of her signature intarsia sweaters to Pallenberg: It shows an abstract sketch of the late model.

On Wednesday, British designer Cozette McCreery, the co-creative director of the now-defunct label Sibling and a collaborator of Freud’s, shared a playful picture of Pallenberg in a bright leopard print dress smoking in her kitchen. It was taken during a recent look book shoot for Bella Freud that took place in Pallenberg’s home.

“Beaming beauty busy making drinks and chatting up my boyfriend, letting him take this picture in her kitchen as we snapped Bella’s look book. We’d chat about archeology and gardening,” wrote McCreery in her post.

Pallenberg is survived by her two children with Richards, Marlon and Angela, and her five grandchildren. Her third child with Richards died during infancy in 1976.