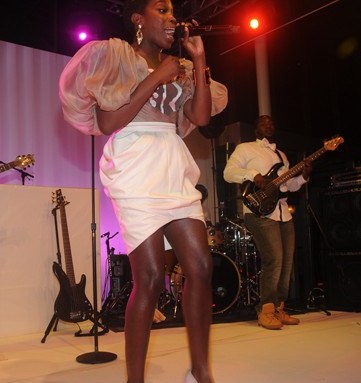 As many a hostess knows, throwing a garden party always involves putting oneself at the mercy of the weather gods.

Luckily, the Museum of Modern Art planned for Tuesday night’s inclement skies and erected tents for its annual Party in the Garden (dubbed “The PIG”). Perhaps they should have added a few heating lamps as well.

“Oh, it’s cold,” exclaimed Dionne Warwick as she stepped outside. (The singing diva was visiting the museum for the first time, as a guest of Edgar Bronfman, Jr.)

“Last year, it was 95 degrees,” pointed out Coco Kopelman. “It’s chilly,” said Glenn Close, looking around, but she was determined to enjoy cocktail hour in the Abby Aldrich Rockefeller Sculpture Garden. “I’m a huge fan of MoMA,” said the actress, who is on hiatus from “Damages.” “I’m on vacation. I’m so happy.”

She, like co-chair Marie-Josee Kravis, had shopped her closet — the former in “an amalgamation of Armani,” the latter in “Chanel from about 20 years ago.” Cutbacks also appeared in vogue for the menu: pigs in a blanket, mini grilled cheese and paella.

Afterwards, a bevy of Rockefellers, from 93-year-old David to 29-year-old Justin, as well as Agnes Gund, Candice Bergen, Vernon Jordan, Larry Gagosian, Jeane Greenberg Rohatyn and artist Paul Graham headed inside for dinner. Echoing the more casual dress code (cocktail instead of black tie), the space was filled with Miami-style nightclub lounge areas, with Mayor Bloomberg and Caroline Kennedy seated on couches with low-level tables. “You too could get one of those lounges if you paid $100,000,” joked one organizer.

Earlier in the night, Mayor Michael Bloomberg was introduced to Estelle, who also was visiting the museum for the first time. “I’m a bit of an art fan,” she said, saying her favorites are Marilyn Minter and Victor Matthews. “I’m brand new [at collecting]. I’m like a little baby — I’m still in the $500 range,” she said.

After dinner, the singer performed in the garden for the crowd of 20-somethings who flooded in after 9 p.m. and got the all the jaded New Yorkers singing along. “I’m sick of singing this song,” she said of her hit “American Boy.” “So you are all going to help me.”