Kate Moss remained regally cordoned off in the VIP area of the Ritz Club at a party Wednesday for her bag line for Longchamp. 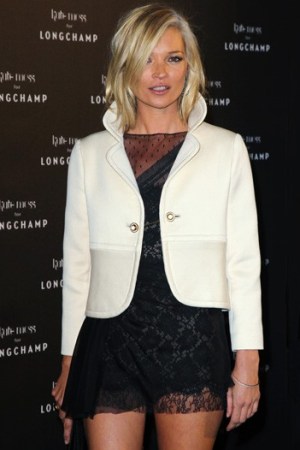 At the launch Wednesday night at the Ritz Paris for the new Kate Moss for Longchamp handbag line, the supermodel also did some handiwork for her party outfit and took scissors to a black Valentino number. Moss lopped off eight inches, making the dress into a micro-mini and matched it with a vintage white couture Valentino jacket she bought in Rome. Among the revelers, Jean-Marc Barr marveled at the amount of random paraphernalia some women cram into their bags. “In the Eighties, I had a friend who would travel with a pair of scales in her rucksack,” he recalled. Katty Besnard, lead singer of the Plastiscines, said the band was gearing up for a two-month tour of France, kicking off next week. Model Alice Dellal was still getting used to her blonde tresses after spending four hours at Christophe Robin’s salon to get it dyed for the Valentino show earlier that night. “It kind of freaks me out,” she said. Dellal added she would next appear in the look book of jeweler Dominic Jones, and looked forward to returning to drumming with her band, Thrush Metal. Also talking metal, jewelry designer Gaia Repossi disclosed she’s about to leave for New York to start work on a silver and gold jewelry line in collaboration with Alexander Wang that will likely appear in his show.