For years, Dylan Jagger Lee — son of Tommy Lee and Pamela Anderson — put out music with Anton Khabbaz as Motel 7. Now, with a new single and more on the way, they've decided to put their face to the music.

When Dylan Jagger Lee and Anton Khabbaz dropped the music video for their new single “Are We There Yet” earlier this month, it was the first time they revealed themselves to be the names and faces behind Motel 7. The video, which was directed by Pierce Brosnan’s son Paris Brosnan, showed the two frolicking along the PCH, immediately cementing them as summertime SoCal beach boys who like making music.

The duo has been building a fan base online for the past few years, but it was news to the fans that Motel 7, as they’ve been known, was a duo of young Los Angeles-based guys named Dylan Jagger Lee and Anton Kahbbaz. It was news to Tommy Lee, too, that his son was following in his footsteps.

“He didn’t even know I was in a band until four days ago,” says the 23-year-old, who is the youngest child of the Mötley Crüe rocker and Pamela Anderson. “I didn’t tell my parents or anything, I try to keep them as far out of it as possible. He was pretty pissed when he figured it out. He was, like, ‘Dude, what the f–k? You didn’t tell me you were singing and s–t, that’s so dope. What the f–k?’ And then I was, like, ‘Yeah, I’m pretty low key.’”

Khabbaz, calling in from the Calabasas area while Lee was on from Malibu, sitting on the bedroom floor, is relieved that their secret is out and feel now that the sky’s the limit for Motel 7.

“Before it all started, no one knew who was in the band, what it was and what Motel 7 was,” Lee says. “Now it’s funny, because a lot of people are, like, ‘Oh s–t, that’s crazy. I didn’t even know that was you. I actually listened to a song or two back in the day.’ It’s funny, it’s a very interesting thing, and the song is doing really well, so we can’t complain.”

“Yeah, we’re used to all of our friends only hearing the music, and now everyone’s hearing music,” Khabbaz adds. 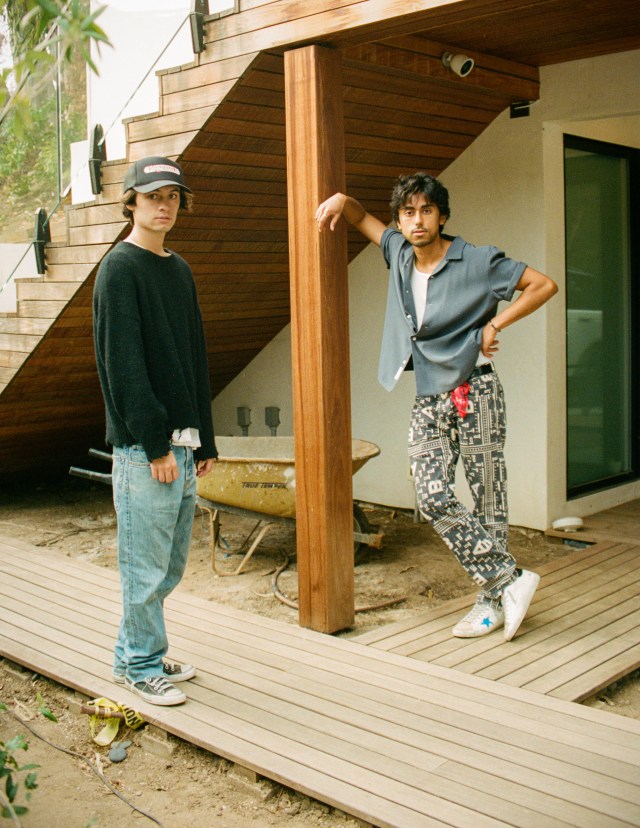 The motive behind keeping their identities secret was less of a conscious desire to remain anonymous and more that they just viewed their Motel 7 work as a creative outlet — plus, they both were engaged in other individual work. Lee had a deal with RCA at the time for electronic music and contractually wasn’t allowed to put out other music, while Khabbaz was producing and also working in the electronic space.

“Me and Anton were really good friends and we just made music,” Lee says. “We were, like, ‘This is dope, we should just put it out. Why not?’”

Given their contracts, they couldn’t upload their songs under their own names, thus Motel 7 was born.

“I’m pretty sure we got really high one night,” Lee says of settling upon the name.

Slowly the music started speaking for itself, and labels and managers came calling, wondering who was behind the songs they had randomly found on Spotify.

The first single is definitely a breezy poppy tune, but the two aren’t limiting themselves — there are no boundaries, Lee says.

“We’ll put out a rap song, we’ll put out a pop song, put out an ‘I love you’ song. We were, like, let’s just make whatever we feel at the moment,” he says. What they’ve come up with is a collection of songs that isn’t exactly cohesive sonically, they say, but it reflects their music-as-creative-outlet approach that’s always been central to the band.

Lee and Khabbaz met in a one-year, music-focused technical school after both dropped out of college, bored by what they were offered and passionate about making music instead.

“I’ve always been on my own path and that’s why I wanted to do music in the beginning, because I was, like, ‘Damn, I don’t know. I feel like I don’t really love rock music, so I’m definitely not going to go into that lane,’” Lee says. “It was always, ‘I’d rather be a rapper than a rock guy.’ I don’t know how to describe it. I wouldn’t say [my dad] gave me any tips or tricks or anything, but he definitely bought me Ableton and then he got me started.”

Khabbaz, meanwhile, was forced into piano lessons as a kid, which he resented then but is now, of course, thankful for.

“They sparked my musical inspiration for sure,” he says.

Lee says he never really felt pressure about entering the music industry because of what expectations they might have from the son of a rock legend. Or rather, he just doesn’t care.

“I’m not really one to care what others think, really,” he says. “If someone was, like, ‘You’re whack,’ I’d be, like, ‘Fire, let’s go.’ That probably means I’m doing something right. I never really worried about expectations or anything, because I love doing it and making music is so fun. When I realized that, that I didn’t care what anyone thought, it was, like, ‘Oh, let’s do it.’”