London may have been dripping with rain last week, but the skies were clear at Annabel's, and the snow babes were out in force. 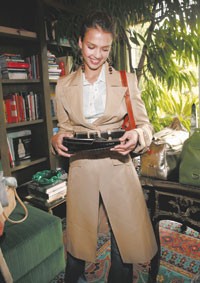 London host Farhad Farman Farmaian brought a little bit of Switzerland to Annabel’s last week when he threw a Sixties St. Moritz fete. He even flew in Mario, the legendary bartender from The Palace Hotel, who doled out tiny glasses of gluwein to guests. Two Saint Bernard dogs greeted arrivals at the door, there was a moose head in the bar, and the dining room was bedecked with mountain goat antlers and moss-covered candelabra.

“Anyone who wants to make a fool of themselves, come on the dance floor now,” boomed the Cresta Club’s Clifton Wrottesley after a buffet dinner of Swiss cheeses and meats, veal and spaetzle. Wrottesley led volunteers wearing crash helmets, fur hats and Pucci dresses through the obscure St. Moritz ritual of imitating an exploding firework.

“I was going to wear moon boots, but then how do you dance in them?” queried Karen Groos, who opted, instead, to wear fur on her head. “I wear this skiing,” she said, pointing to her enormous hat.

Six thousand miles away in Beverly Hills, not even unseasonably cold temperatures could force the stylish crowd to forsake the bare legs, wedge sandals and paper-thin silk dresses they sported to toast Derek Lam and the spring collection he designed for Tod’s. The luxury house and Vogue threw a Thursday afternoon tea at Kelly Wearstler‘s abode, drawing fans Crystal Lourd, Kelly Lynch, Colleen Bell and Elizabeth Wiatt. Wearstler chatted up guests Mischa Barton and Camilla Belle, while giving everyone free rein to roam her home, a treasure trove of finds from the 1800s to the Eighties. “Wow. I can’t believe people live like this,” marveled China Chow (no stranger to grand homes herself), as she and Amber Valletta peeked into the onyx-walled master bath. Back out in the parlor, Jessica Alba and Joy Bryant were having serious accessories envy, eyeing the leather totes floating by on models. “It’s making me want to go change,” sighed Bryant, and in minutes she was draped in one of Lam’s leather blazers. The designer couldn’t have been happier. “What I love about all these beautiful women is that they exude a modern elegance that’s always such an inspiration,” he said as he hid out in the kitchen grazing the hors d’oeuvres trays. “It’s the idea of my collection — when you are confident, there’s no need to overdo it.”