The photographer was invited to speak to an audience of students about his life, career and lessons.

The legacies of Derek Jeter and Alexi Lubomirski are definitely shaped by what they have accomplished in the public eye.

Jeter served as the Bronx Bombers’ fearless leader who helped lead the team to five championships, including three World Series victories in a row to end the 20th century. Lubomirski has shot for Vogue, Harper’s Bazaar, GQ and Allure, among other publications, published a number of books, and photographed Prince Harry and Meghan Markle’s engagement and wedding photos.

But their many accomplishments pale in comparison to teaching their children and other youth.

Derek Jeter’s Turn 2 Foundation, which was founded to motivate and steer young people away from drugs and alcohol, and Movado, a longtime partner of the foundation, hosted a discussion with Lubomirski and Movado global chief marketing officer Mary Leach in front of an audience of students.

Lubomirski shared details about his life and career and spoke at length about fatherhood, how his stepfather’s passing affected him, going vegan, meditation, photographing the Royal Wedding and his children’s books.

“After [my stepfather] passed away, I reentered life with this new gift that he had given me which I call future hindsight,” Lubomirski explained. “Every decision I made from then on was how will I feel about this decision on my death bed. I was able to do things that I had never allowed myself to do before.”

A few of those things included publishing books, such as “Diverse Beauty,” a photography book of photos of women of many races, ethnicities, body types, and abilities, and two children’s books, “Princely Advice for a Happy Life,” which he wrote for his first child, and “Thank You for My Dreams: Bedtime Prayers of Gratitude.”

“Princely Advice” is a play on Lubomirski’s royal heritage. The photographer learned that he was a Polish prince, but rebelled against the title after learning that he would not inherit anything.

“My mother said to me, ‘if you want to be a prince in today’s world, you have to be a prince in your heart and in your actions,’” he said to the audience. “Very early on I decided that I didn’t want my history to be a burden on me. I wanted to forget about what we had and make my own empires, my own kingdom.”

What does his kingdom look like today? “It’s much more spiritual,” he said separately. “If you take away the word ‘prince,’ it’s just about being a good person. I think we all have every good quality within us to raise ourselves to be better people.

“It’s very bizarre, because I still think I’m a 14-year-old boy who hasn’t got any of the answers, but as you get older, just by default in your age, you have more experiences and for me it’s like talking to my kids. You have learned certain things along the way and if you’re able to pass down something positive and then you should be doing that as much as possible. When I was a kid I was constantly looking for answers and for guidance and all these things, and I think this is an amazing organization. So I’m honored and humbled to be asked.”

Lubomirski is also a vegan, and took a stand against working with companies that work with fur. Movado partnered with the photographer on vegan watch straps.

“When we started this project with Alexi, I was so inspired by him, [Efraim Grinberg, chief executive officer of Movado], and we thought this is the perfect presentation for this year’s Turn 2 event because he’s so genuine and authentic in what he believes,” said Leach. “After the presentation and the number of students that went up to Alexi, he was stopped by different kids that were so taken with his messages and his message about diversity and being a force in the industry while you can. This is one of my favorites of all time.” 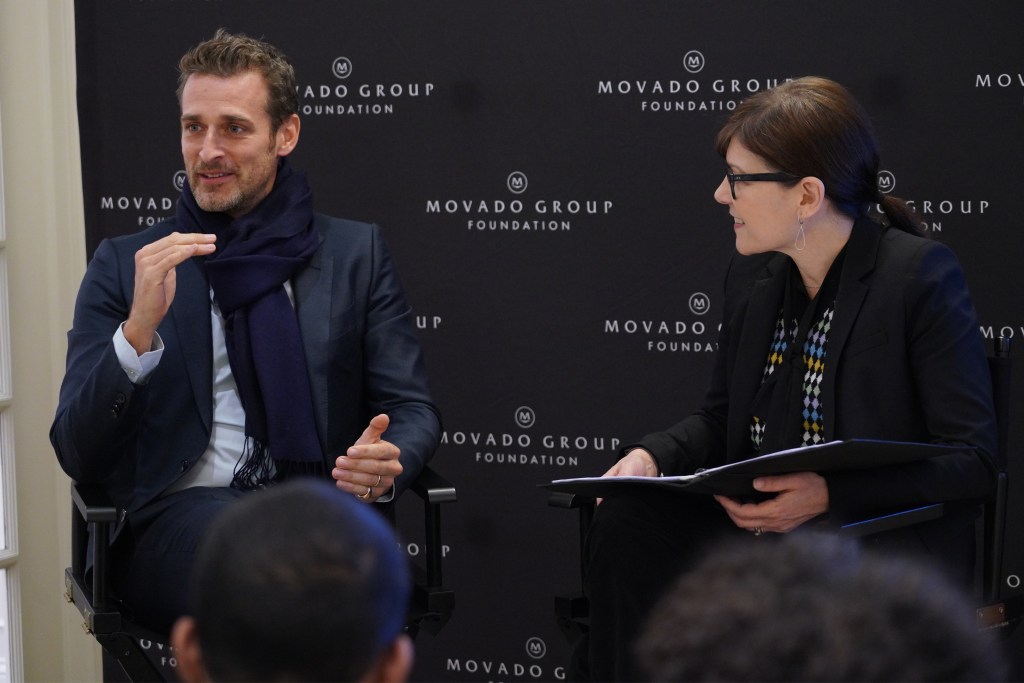 The Turn 2 Foundation helps youth through activities like special events, internships, grants and programs such as the Turn 2 Us mental health promotion and prevention program created in partnership with the New York-Presbyterian in Washington Heights, and the Derek Jeter Center at Phoenix House for teens facing drug problems and rehab, among other initiatives.

The foundation also introduces young people to industries and opportunities that they may not have been exposed to. Students in the program were treated to a tour of NBC Studios, and invited to a performance of “The Color Purple” on Broadway.

“At that age you never know what you’re passionate about. The speeches open their eyes and give these kids the opportunity to learn about these different areas and also learn the fact that it takes hard work to be successful in whatever you do,” said Jeter.

Movado has been a partner of the Turn 2 Foundation since Jeter was an ambassador for the company. Though they have parted ways, they remain partners for the foundation’s events.

Jeter’s legacy began in 1996 with his first World Series Championship win, but also for the founding of the Turn 2 Foundation. He started the foundation with his father, Dr. S. Charles Jeter, and his sister, Sharlee, who serves as president of the organization.

“Our father said, ‘I’ll do this but you’re going to have to be hands-on with this’,” said Sharlee Jeter. “Derek has been very, very involved since Day One. Over the years we have been able to establish programs that are meaningful and are proven to work for young people and I think it’s something that we should be proud of and Derek should be proud of, too, that it’s no longer because Derek is who he is that validates what we’re doing. Now it’s interesting because he could be and wants to be more involved.”

“I say it time and time again, I was never as advanced as these kids are at such a young age,” Jeter said. “I wasn’t thinking about giving back to my community and being a role model, I was all about what I wanted to do and I guess you could say I was a little bit selfish, which I think is probably most kids at that age but not our group.”

Jeter had been very involved since the foundation’s founding, even raising $30,000 in its first event in Kalamazoo, Mich., where he was raised. He understands more now the importance and impact the foundation has as a father, which he says is his “proudest achievement.”

“Well first of all, you always hear what is your legacy going to be as a player and everyone wants to have a great legacy on the field, but it was just as important to me and more important to my family as well to have a legacy off the field and that continues in my post playing career,” he said.

“To think we’ve given back $30 million over the years is something we’re extremely proud of and we want to continue that. We’re extremely proud of what we’ve been able to accomplish but at the same time we got a long way to go. We’ve been able to give back so much because of our partners, Movado being one of them, but it’s extremely important for our family give back as much as we can.”

Mariano Rivera on His Foundation, Retirement and the Yankees