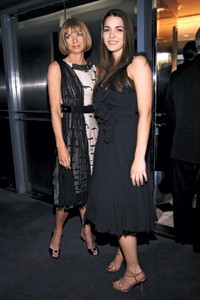 NEW YORK — The devil might wear Prada, but so does Anna Wintour. The Vogue editor in chief, who donned a Prada frock for Tuesday night’s screening of the movie based on Lauren Weisberger‘s book, impressed even the most blasé social observer with her bold move. After all, the fashion and media worlds have been abuzz ever since her former assistant penned the roman à clef — although the crowd controlled themselves admirably and there was nary a gasp or a sideways glance at Wintour’s entrance. And with daughter Bee Shaffer and companion Shelby Bryan on either side, Wintour sat stoically through the entire film before literally bolting out of the Paris Theatre to avoid press as the credits rolled.

The next day, a Vogue spokesperson insisted that “Anna felt the film was very entertaining,” despite her perfectly maintained silence during the actual screening.

Later, the audience trooped over to the St. Regis Hotel for a dinner and auction of fashions from the movie to benefit Dress for Success, the Breast Cancer Research Foundation and Equality Now. Donna Karan and Martha Stewart stopped by to say hello to star Meryl Streep.

As Coco Kopelman, Patricia Clarkson and Candice Bergen looked on, the Sotheby’s auctioneer drummed up enthusiasm for the items. Streep’s co-star, Stanley Tucci, offered a drink at the St. Regis King Cole Bar, which figures in the movie, as well as shoe shopping. “Oh, you’re a 9 1/2? Good, me, too,” he joked with winner Christine Schwarzman.

Anne Hathaway offered two hours of baby-sitting. “How many times have your kids watched ‘The Princess Diaries?’ What about ‘Ella Enchanted?'” she urged. Producer Wendy Finerman spotted two rival bidders and convinced Hathaway to baby-sit twice for a grand total of $40,000.

Downtown at Phillips de Pury & Co., Emporio Armani and Vanity Fair cosponsored the 7th Annual Art Auction Benefit. Jacquetta Wheeler, Thakoon Panichgul and Carlos Miele perused the silent auction of works by Vanessa Beecroft, Craig McDean and Walter Chin, while honorary chairs Ashley and Mary-Kate Olsen braved the flurry of flashbulbs, but declined to chat about their art preferences. Committee member Liv Tyler was much more enthusiastic, though she had to leave early to speak in honor of director James Mangold. “I’ve never done this before. If I were doing this properly, I would change,” she exclaimed of her back-to-back evening.

Uptown party goers feted the Spanish and Latin American dancers of the American Ballet Theatre at Noche Latina. Francisco Costa and Dayssi Olarte de Kanavos dug right into their ham and arugula salads after the performance at the Metropolitan Opera, while Carolina Herrera, Patricia Cisneros and Blaine Trump compared the Lee Angel earrings found at their seats. “I always wanted to be a ballet dancer,” divulged Angel Sanchez. “Ever since I was 11.”

It does seem 11-year-olds have all the fun. Monday during Lenox Hill Neighborhood House’s annual Kids in Candyland benefit, chaired by Alex Kramer and Julie Dannenberg, wee ones swarmed Dylan’s Candy Bar, while moms dutifully regulated intake. “So much for sleeping,” sighed Debbie Bancroft as she followed her daughter carrying a bag full of treats out the door.