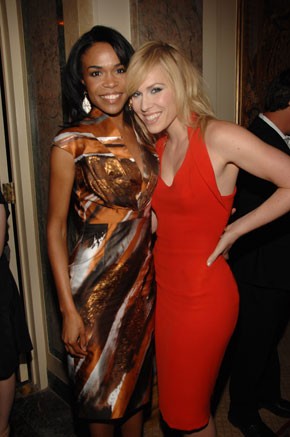 After cocktails (during which Michelle Williams of Destiny’s Child made a brief appearance before heading to another party), a lamb dinner and a live auction by Jamie Niven that helped contribute to the $2.9 million raised that night, chairs and attendees like Muffie Potter Aston, Tory Burch, Coco Kopelman, Jennifer Creel, Dayssi Olarte de Kanavos, Bryant Gumbel and Elizabeth Lindemann were treated to a live, high-energy performance by Natasha Bedingfield. Never mind that many in the room had never heard of the Grammy-nominated singer.

“What does she sing?” queried Grace Hightower to a tablemate. “I have no idea who she is,” laughed Jamee Gregory. “Muffie brought her up in the [event] meeting and no one knew her. We are all so out of it.”

Unlike many such pairings, though, Bedingfield had a personal reason for her session that night.

“My grandmother died of cancer,” explained the songstress, who changed from a crimson Calvin Klein dress to latex leggings and a white t-shirt for her performance. “And I feel like my industry is so selfish.”