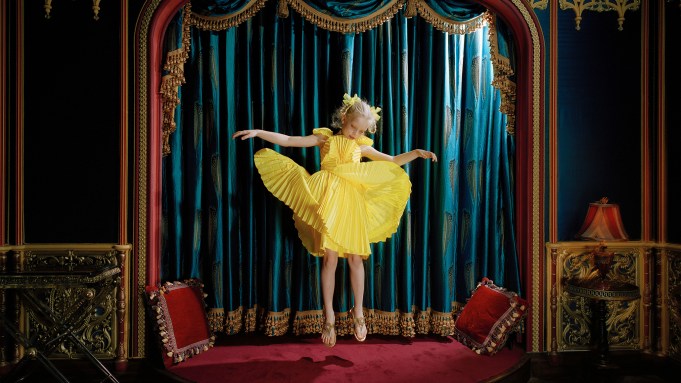 As the great divide between the haves and have-nots becomes more gaping, Myles Little has given consumers another reason to size up the problem.

Little turned up Tuesday night at the Sebastian Junger-owned Half King to detail his new book “1% Privilege in a Time of Inequality.” With 50 images and essays by Nobel prize-winning economist Joseph Stiglitz and author Geoff Dyer, the 80-page tome is a companion piece to the photography exhibition by the same name that he launched in the fall. A senior staff photo editor for Time magazine, the Irish-born Little took on the one-percenters when he was on his own time. While not a lensman himself, Little selected shots from David Chancellor, Mike Osborne, Zed Nelson, Virginia Beahan, Laura McPhee and others.

Nina Berman, Jacqueline Hassink, David Leventi and Kevin Cooley were among the guests, but not Stiglitz, who is in Davos, Switzerland for the World Economic Forum. In his essay for the book, Stiglitz wrote, “It is estimated that the poorer half of the global population possesses less than 1 percent of global wealth, while the richest 10 percent of adults own 86 percent of all wealth.”

Last year at Davos, Oxfam revealed that the 85 richest people in the world have the same wealth as the poorest 50 percent (3.5 billion people). That figure is now 80 – “a dramatic fall from 388 people in 2010,” according to Oxfam’s annual study of inequality that was released Monday.

In an interview Monday, Little said he felt as though he could have easily continued to focus on this subject for another year. “It’s in the news but it is hard to accept the issue.”

His take on the one-percenters was somewhat of a response to the 1955 Edward Steichen-curated exhibition, “‘The Family of Man’ at MoMA,” which Little described as “a seminal documentary project of photography that featured images from all over the world. The photos relayed the feeling that we’re all in this together, wherever you are, whatever you look like – we’re all in the same boat.” But such oneness has crumbled, according to Little, who said, “I think some people are in a rowboat and some people are on a cruise ship.”

In his essay, Dyer highlighted the contrast between the “superluxurious” Four Seasons in Mumbai and the sprawling slum right next door, so guests “can do a quick slum tour and get back to your sanctuary without any inconvenience but with some excellent snaps,” Dyer said Tuesday, with a measure of sarcasm.

Dyer has never actually met Little, but they worked together when Dyer wrote the introduction for Time’s yet-to-be-published “100 Most Influential Photographs.” Dyer, a University of Southern California professor and writer in residence, said, “He mentioned this project he was doing as a sort of independent thing, and I very quickly resigned myself to not having the easy bucks coming from Time magazine. But this was a very worthwhile thing to do and I was very happy to write something for him.…There seems to be a great deal of good will toward him in the world.” (Funded by a nearly $31,000 Kickstarter campaign, Little’s book is an extension of the exhibition, which launched last fall and will hit eight more cities this year. All 15 venues paid for the exhibition themselves.)

He noted how the photograph of the lifeless toddler who washed up on the shore of Kos last fall really galvanized people and changed their attitudes about the refugee crisis. “Photographs always have that power to give focus to an issue,” Dyer said. “These [1%] photographs aren’t so explicitly social commentary the way Dorothea Lange’s ‘Migrant Mother’ did. There’s very obviously an aesthetic thing going on. One of the things I like is it is quite a subtle project.”

With a book on street photographer Garry Winogrand in the works and Pantheon set to publish his book of travel pieces, “White Sands,” in May, Dyer disputed the idea that it’s up to artists and writers to try to humanize social discrepancies in a way that politicians haven’t. “I guess you could say that Bono and Bob Geldof are trying to save the world. I don’t have such a cynical take on politicians. There is a considerable movement across the world really to try to minimize the discrepancy between wealth and policy. I don’t think it’s just down to writers and artists.”

For Little, Paolo Woods’ and Gabriele Galimberti’s cover photo for the Hatje Cantz-published $30 book encapsulates three views. “At first glance, it’s a picture of a man swimming in an infinity pool at the top of a luxury skyscraper in Singapore, overlooking the skyline [with the financial district as a backdrop.] The reality is Singapore is a leading tax haven where some multinational corporations can hide their money,” Little said. “And on a third level, the pool looks like it is about to spill right over. There is a sense of risk and impending catastrophe with the man looking seemingly content and enjoying himself. It’s a very powerful metaphor of the large sense of complacency and temporary privilege that exists in this unstable and very risky climate.”

Christopher Anderson’s 2011 shot of a street preacher standing with his arms outstretched in front of the New York Stock Exchange is another striking image to Little. Hassink’s 2003 photo of a barren Givenchy haute couture fitting room and Brian Ulrich’s 2013 shot of bare Cole Haan mannequins in a Chicago store window are also featured. The book also makes note that the six Walton family heirs’ $89.5 billion wealth is as large as 41.5 percent of all American families.

The next stop for the “1% Privilege in a Time of Inequality” show will be Rendez-Vous Image in Strasbourg, France Jan. 22 to 24, before moving on to the Balkan Photo Festival Jan. 29 and other galleries and photo festivals. As for why the subject has resonated with so many, Little said, “People appreciate the beautiful craftsmanship of the photos and they seem to respond to the subtle critique. It’s not in-your-face, it’s not a caricature and it’s not a joke — hopefully. It’s a nuanced look at an issue. I think we’re all familiar with the satire of the greedy villain. People appreciate a little subtlety.”