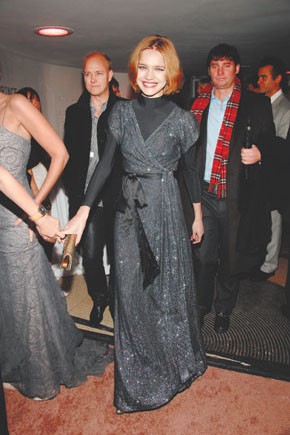 The Guggenheim Museum’s Young Collectors Council Artist’s Ball rallied weary young social troops for one last pre-holiday bash Thursday night. But the gallerinas, starlets and fashionistas who packed the Chloé-sponsored evening didn’t brave slushy streets for the art or for Ryan McGinley, the evening’s honoree. In fact, most guests openly admitted to little or no familiarity with either.

Singer Feist, whose music has been featured in practically every iPod commercial on TV and was used by at least three designers during runway collections, remained incognito for most of the night. “I’m just sort of tiptoeing my way around fashion,” she said.

It seems the street runs both ways: Erin Fetherston had never met the singer. “I hope she doesn’t sue me,” joked the designer, who used the Feist song “Sea Lion Woman” in her show. Her art knowledge, too, appeared about on par with Mortimer’s. “Who is he?” she responded when asked if she liked McGinley’s work. “Oh, that’s embarrassing, I should know that.”

Meanwhile, guests like chair Paulo Melim Andersson, Natalia Vodianova, Becki Newton, Blake Lively, Julia Restoin Roitfeld, Elettra Rossellini Wiedemann, Piper Perabo and Barbara Bush, checked out the montage of McGinley’s photographs projected on a screen in the museum’s rotunda. Others were too busy fighting for drinks at the packed bar — the Champagne ran out around 11 — and checking out a performance by melodic crooners Blonde Redhead.

Even more were donning their coats and bravely making their way back out into the freezing night after this last, requisite social appearance.

“I came, I saw,” shrugged a winter boot-clad Erin Wasson as she made a hasty departure well before midnight.