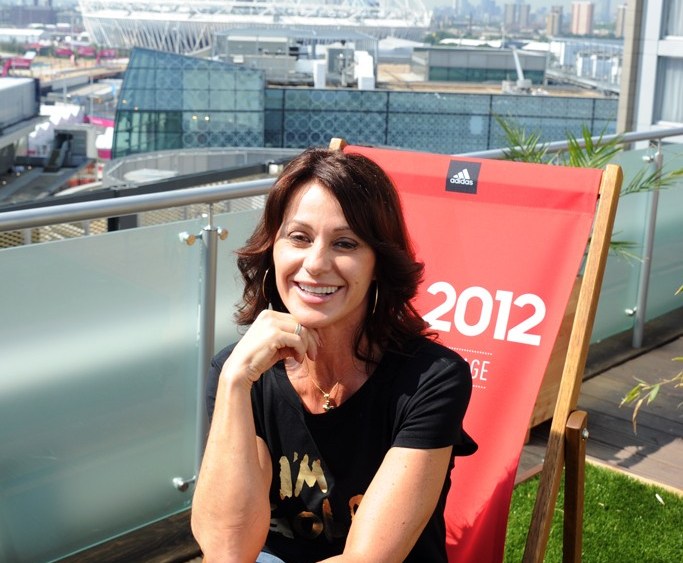 So what does an Olympic gold medalist wear once she’s retired her leotard, slippers and sweats?

“I do a lot of Diane von Furstenberg,” says the 50-year-old Nadia Comaneci, the Romanian-born former gymnastics wunderkind who is in London promoting the 2012 Olympic Games, which begin tonight.

“I have a classic taste with a twist, because classic never goes away. And of course, like any other woman, I love shoes and bags,” says Comaneci, who is dressed in a black and gold T-shirt, skinny jeans and stilettos, as she chatted to members of the press this week as part of an Adidas-sponsored series of talks at Westfield Stratford.

The former gymnast — who as a gutsy but graceful teenager won a total of five gold medals in the 1976 and 1980 Games, as well as one perfect-10 score — took part in the Olympic torch relay in London. Over the weekend, she carried the flame to the roof of the O2 Arena alongside the former basketball star John Amaechi.

Comaneci says she looks on her past with pride — and zero regrets.

“If I was 14 or 15 again, I would do the same thing. I’ve done everything. I think I’ve accomplished more than I had in mind. I always say I don’t want to change anything in my life.”

Comaneci, who famously defected to the U.S. in 1989 and later made her way to Canada, says she remains close to her coaches, including Béla Károlyi, who spotted and began training her when she was six years old.

“I’m very good friends with my former coaches. We speak on the phone a lot. You know, I’ve always said that my success was 50-50,” she says. “I was very lucky to compete at a time when Bela was coaching. They are very dedicated. That is the recipe of success. No magic here. Just work, work, work. And we succeeded.”

She retired in 1981, when she was 20 years old, and Comaneci says gymnastics has changed radically since her heyday.

“You can’t get a perfect 10 anymore. And you can be a specialized gymnast, which means you don’t have to do all events,” she says. “You go in for what you are good at. You don’t have the flexibility that we had before. Gymnasts compete longer. They also make money out of this compared to my time. In my time, it was an amateur sport.”

Comaneci, who is married to the former American gymnast Bart Conner, says she believes Team USA will have a leg up in the medal race this season.

“I think the United States is very good at this particular time. I’ve watched them compete at nationals. I think they have a great chance to be the favorite,” she says. “I think Romania is doing very well, and Russia and China, too, of course.”

She’s also planning to check out other events, including swimming and track and field, and will be taking part in First Lady Michelle Obama’s “Let’s Move” event for military children and students at the U.S. Ambassador’s residence in London later today. The Obama-led initiative aims to fight childhood obesity.

“It’s a responsibility to encourage kids to play sports. Sports offer a lot of opportunities, and it is also good for your health. I’m going to take my little boy to that,” says Comaneci.

Her son Dylan, who’s six, is her and her husband’s main priority now. “He is the most important thing. He is the gold medal for us.”