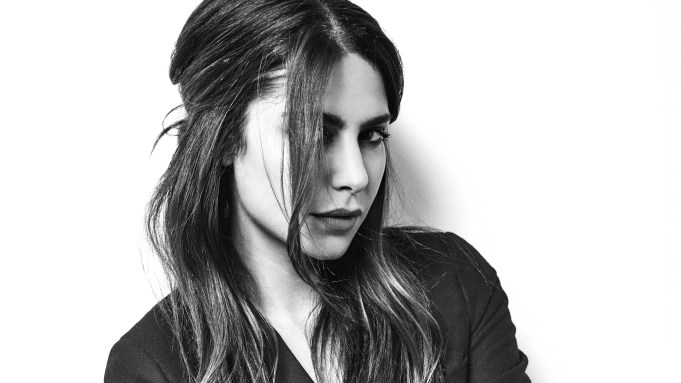 When Nadia Hilker was 17 years old, she and her mother flew from Munich to Berlin to meet with a potential acting agent, despite the fact that Hilker had never acted a day in her life. “I walked into the office and the agent just looked at me and said, ‘you’re an actor, I want you,’” Hilker says. “I thought she was cuckoo!”

Ten years later, Hilker, now 27, can fully wear the title of “actress,” as she sits in the lobby of the Ritz Carlton in New York the day of her very first film premiere. And it’s no small premiere at that; she joins Shailene Woodley, Theo James, Naomi Watts, Miles Teller, Zoë Kravitz, Ansel Elgort in the latest installment of young adult mega-franchise “Divergent,” which releases its third installment, “Allegiant,” on March 18.

Prior to the pseudo-audition in Berlin, Hilker spent her childhood “playing in the woods with my dog and my brother,” in the countryside of Munich, she says. “It was perfect.”

Things were more complicated when she went to school. “I got bullied quite a lot when I was younger, because I was different, I guess,” she says. “I dressed in a very weird way — there was one year where I thought I was Erykah Badu, and I was wearing things on my head.”

Though it would become her greatest outlet, acting was never even a thought early on. “My mom works for Lufthansa and my dad and my brother work in IT,” she says. “No one is into acting. Watching movies was never even something we did as a family.” She found her way to that casting agent’s door through ballet, after a scout visited her dance school and she was referred to the acting agent.

After meeting with the agent, Hilker still wasn’t convinced and returned home to study economics. But after a year of that — topped with a breakup — she felt ready for a change. “I was telling my parents that I wanted to quit school, and my dad was like, ‘well, how about you quit school and call this woman and tell her you want to be an actor’,” she says. “She had been calling me every two months for like two years. So I called her and I was like, ‘OK, let’s do this’.”

She booked her first role, a lead in a German TV movie, on her first audition. After a couple of years, though, she couldn’t quite find her place in film anymore. “I played a lot of rebellious young girls, and then I got older and we don’t really have a lot of ‘not a girl, not yet a woman’ parts in Germany, especially not for me as I’m very exotic-looking for Germans,” she says. “I kind of stopped working, and it was really bad. I was broke, my parents had to support me, and I spent years in my apartment just staring at the ceiling.”

Her father was once again the one to pull her to acting. “I was thinking about becoming a stewardess,” she says, “and my dad, who is very German in terms of being pragmatic and realistic, just said ‘no, you’re going to give it one more year. And if nothing happens you can quit.’” In that year, she was cast as the lead in an independent film called “Spring.” “I stood in front of a camera again and realized how much I love it and need it and want it.”

It’s safe to say she feels scoring a role in the remaining two “Divergent” movies is just as “cuckoo” as she found that first agent meeting. “It was horrifying,” she says of joining the cast, most of whom had already filmed the first two movies together.  “You’re like the new kid at school.” Her character, Nita, is on the other side of the wall in the dystopian society, and is “a very fierce, strong, confident, badass woman,” Hilker says.

She’s going at the whole acting thing full-force. In addition to the final “Divergent” movie, out in 2017, she’s set to join the cast of The CW’s “The Hundred,” playing “a character they’ve been talking about so much in the previous seasons.” Her ambitions don’t stop there. “I want to play a bird, and a crocodile, and a man,” she says. “I want to play whatever I can do.”