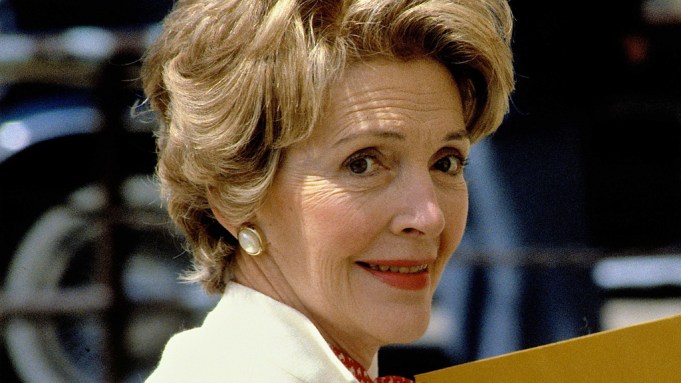 Nancy Reagan, who has died at age 94, will be remembered for bringing a sense of style to the White House not seen since Jackie Kennedy.

Reagan reportedly will be buried at the Ronald Reagan Presidential Library in Simi Valley, California, according to a statement.

Reagan, who reportedly died of congestive heart failure, came to signify the Old Hollywood style with her outfits by the likes of Adolfo, James Galanos, Bill Blass, Oscar de la Renta, Arnold Scaasi and others. She favored the color red, so much so that it became known as “Reagan red.” Her fashion sense epitomized the go-go Reagan years and she brought to the White House a contingent of friends who included Betsy Bloomingdale, Jane Dart, Virginia Tuttle and Betsy Wilson. The group had bonded over lunches in Bel Air or the Pacific Palisades, favored the same designers, and even shopped at the same places — generally the private salons of I. Magnin. They remained close throughout the Reagan years and afterward, and the first lady remained eager to keep up with the goings on in society and fashion even when she was in the White House. An assistant one day phoned the Washington office of WWD to complain that the first lady wasn’t getting her copy of the newspaper every day – so one was sent to her by overnight courier every evening to make sure it arrived on her desk in time.

But, as did Jackie Kennedy, Reagan was highly criticized for her high spending ways during the recession. She redecorated the White House, bought new china and entertained extravagantly, leading her to be dubbed by some critics as “Queen Nancy.” She also was criticized when it was revealed that many of the dresses and jewels she wore were gifts from the designers, and weren’t bought, as stipulated by law. She defended the gifts by saying she was supporting the American fashion industry, and that she planned to donate the outfits to museums.

Through the decades, Reagan’s style was often reduced to one word — Adolfo — whose striking red daytime suits and clean, but not-to-be-missed evening gowns she wore repeatedly during her White House years.

Reached Sunday, the designer said he first befriended Reagan when her husband was the governor of California, a post he held from 1967 through 1975.

“I’ve known Mrs. Reagan for a long, long time. We met through Betsy Bloomingdale and then we became friends until just now,” he said. “She always called me directly. I never spoke with people connected to her.”

For his visits to 1600 Pennsylvania Avenue, Adolfo would arrive armed with a selection of samples that Reagan would choose from based on whatever she had in mind. Follow-up fittings were practically incidental. “Mostly all the time they were just perfect, because she was between a size four and six. It was just right,” Adolfo recalled.

“Nancy Red” was not something that Adolfo developed on his own. “She had her own ideas and then we would get together. It was a very pleasant arrangement. There are so many people who have different ideas about Mrs. Reagan, but I can tell you sincerely she was a charming, very nice and warm person,” he said. “We had a really wonderful relationship. I would go to the White House and that, but I was not part of her social circle. We were just good friends. It was not like the people who wanted to be with Mrs. Reagan blah, blah, blah.”

Adolfo was often in the loop when more formal eveningwear was needed for state dinners, such as the October 1981 one for King Juan Carlos and Queen Sofia of Spain. Reagan went with a striking off-the-shoulder black and gold gown with Eighties-worthy exaggerated sleeves and a black bodice from the designer. But he wasn’t always told what his designs would be used for. “Sometimes I knew, sometimes I didn’t,” Adolfo said.

“Sometimes Mr. Reagan would come in to say hello. He was a very nice, charming gentleman. After he was no longer the president, I went to their house in California. Everything was just perfect. In fact, the last time I saw Mr. Reagan he was taking me all around the house, showing me all the trophies and all kinds of things,” the designer remembered.

In a 2014 interview with WWD, Adolfo resisted being drawn about one of his most famous clients. But he admitted the two never talked politics. All he would say of her at the time was, “Mrs. Reagan is the nicest person and I love her. We talk on the phone every once in a while. She’s always up, always in a good mood.”

Reagan’s death prompted an outpouring of condolences from former presidents and first ladies, as well as President and First Lady Michelle Obama. The Obamas said that Nancy Reagan “once wrote that nothing could prepare you for living in the White House.”

“She was right, of course. But we had a head start, because we were fortunate to benefit from her proud example, and her warm and generous advice,” the Obamas said in a joint statement.

“Our former First Lady redefined the role in her time here. Later, in her long goodbye with President Reagan, she became a voice on behalf of millions of families going through the depleting, aching reality of Alzheimer’s, and took on a new role, as advocate, on behalf of treatments that hold the potential and the promise to improve and save lives.

“We offer our sincere condolences to their children, Patti, Ron and Michael, and to their grandchildren. And we remain grateful for Nancy Reagan’s life, thankful for her guidance, and prayerful that she and her beloved husband are together again.”

“Laura and I are saddened by the loss of former First Lady Nancy Reagan,” said former president George W. Bush. “Mrs. Reagan was fiercely loyal to her beloved husband, and that devotion was matched only by her devotion to our country.

“Her influence on the White House was complete and lasting. During her time as First Lady and since, she raised awareness about drug abuse and breast cancer,” Bush said. “When we moved into the White House, we benefited from her work to make those historic rooms beautiful. Laura and I are grateful for the life of Nancy Reagan, and we send our condolences to the entire Reagan family.”

“Her strength of character was legendary, particularly when tested by the attempted assassination of the president and throughout his battle with Alzheimer’s,” the Clintons said. “She leaves a remarkable legacy of good that includes her tireless advocacy for Alzheimer’s research and the Foster Grandparents program. We join all America in extending our prayers and condolences to her beloved children and their entire family during this difficult time.”

“Ronald Reagan could not have accomplished everything that he did without his wife Nancy,” said Speaker of the House Paul Ryan. “As first lady, she brought a sense of grace and dignity to the White House. She roused the country to redouble the fight against drugs. And she showed us all the meaning of devotion as she cared for President Reagan throughout his long goodbye.

“She loved her husband, and she loved her country. This was her service. It was her way of giving back,” Ryan said. “And all of us are very grateful. So on behalf of the entire House, I wish to extend our condolences to the Reagan family and offer our prayers on the passing of a great American, Nancy Reagan.”

Catherine Fenton, former assistant social secretary to Nancy Reagan, said in a CNN interview that the former first lady leaves a “remarkable” legacy among American first ladies, from her public fight against the proliferation of drugs to her efforts to raise awareness for Alzheimer’s. She also noted that her personal challenges, including a battle against breast cancer, were fought in the public eye and helped raise awareness for the disease.

Fenton said Reagan had “style and [a] presence in the White House.”

“She had a great finesse. She did come from Hollywood and she had a great eye. We all as young women learned so much from her — the taste, the style, the protocol, creating an elegant, warm evening, whether it was for a small private group of friends or a state dinner,” Fenton said. “She did it very well and she worked hard to make things just as perfect as possible. So we will miss her. She was remarkable.”

In discussing the PBS documentary “Nancy Reagan: The Role of a Lifetime,” in 2011, for which Reagan was interviewed and which coincided with the centenary of President Reagan’s birth, historian Allida M. Black described the former first lady as someone who “knew how to take punch. She knew how to get back up.” The former project director of the Eleanor Roosevelt Papers at George Washington University, added that “she would knock you flat.”

The film portrayed the former first lady as a savvy political veteran who played a far bigger part in charting the course of the Reagan revolution than her public image allowed. “She was very, very engaged behind the scenes because she cared so much about her husband’s standing in history,” NewsHour senior correspondent Judy Woodruff, who narrated the show, said at the time.