CANNES, France – It was the opening day of the Cannes Film Festival, and the entrance of the Martinez hotel, home to some of the biggest stars in town, was under siege. Bulky boxes cluttered the entrance, and a film crew engrossed with an actor in a tuxedo was blocking access to the elevator bank.

In a quiet suite on the second floor, Naomi Watts seemed oblivious to the hubbub. She looked the picture of elegant poise in a purple Roksanda Ilincic dress and Tabitha Simmons high-heel sandals. If she was nervous about her debut later that day as brand ambassador for L’Oréal Paris in Cannes, she wasn’t letting it show.

After all, Cannes is almost home for the British-born, Australian-raised actress. It was the festival that revealed her to the world in 2001 in David Lynch’s “Mulholland Drive,” and her mother now lives nearby.

Add to that the fact that she has come with her two young sons — Sasha, 7, and Kai, 6 — and her stylist is none other than her brother Ben’s former girlfriend Jeanann Williams. Watts recalled first tapping Williams, a former fashion public relations exec, to find her a gown for the Venice Film Festival in 2012.

“She had all these connections and great selections, and I just thought, ‘Wow, she really pulled that off.’ And it was really easy. You always want to work with someone that’s easy to be around, and so I feel like it has worked ever since,” she said.

“Sure, there are disagreements. She’ll often want me to go stronger and she’ll push me to the edge at times, and most of the time I’m up for it, but then I’ll say, ‘No, remember, I’m not as young as you,’” said the 46-year-old actress. “But I like to be pushed a bit.”

The duo knocked it out of the ballpark at the festival’s opening ceremony, for which Watts wore a feathered Elie Saab haute couture gown with Bulgari jewels. For the following Saturday’s premiere of “Sea of Trees,” which is competing for the Palme d’Or prize, Watts donned an ice blue tiered Armani Privé dress.

Directed by Gus Van Sant, the film portrays a widower, played by Matthew McConaughey, who heads to a forest in Japan with the intention of killing himself. Watts appears in flashback scenes showing the breakdown of their relationship and her subsequent illness. 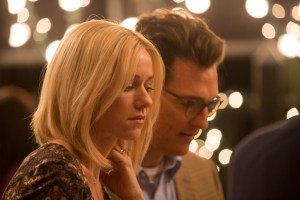 If the subject matter seems irremediably bleak, she is keen to highlight the redemptive aspects of the story.

“There is something that’s very life-affirming about this film despite the exploration of suicide,” she said pensively.

‘This man is dealing with grief and I think that’s a really universal subject that we all have our different ways of dealing with. It’s quite a beautiful story, in terms of how he finds a way to change his life, because at the offset of the film, it seems like it’s just not worth living anymore,” she added.

The movie was drubbed in Cannes, though Watts drew plaudits for her skillful performance as an alcoholic who develops a brain tumor.

If her last three movies have been supporting roles, she’ll be back in leading lady mode soon in “Demolition,” costarring Cannes jury member Jake Gyllenhaal, and also has a recurring role in the sequels to studio franchise “Divergent,” joining an ensemble cast that includes Shailene Woodley, Kate Winslet and Ashley Judd.

Watts has consistently juggled independent films like the recent “St. Vincent,” in which she was hilarious as a pregnant Russian prostitute, with blockbusters such as “King Kong” and “The Ring.”

“It is very helpful to do these films and still maintain a career in independent films, you know, the labors of love and those passion projects that are not easy to get up off the ground,” she remarked. “And it’s not like I only want to do independent films. It’s just as fun to do, if the role is good, these other things too. I think as an actor, you’re always looking for diversity.”

Her approach to beauty is equally balanced. Watts has so far resisted the lure of plastic surgery – a brave stance in a city where 20-year-olds are getting Botox.

“Look, it’s not just Hollywood, it’s just that everything is polarized in Hollywood. It’s part of reaching that point in your life where you’re feeling like, ‘Oh wow, things are changing, and how do I deal with this?’ And you know, it’s certainly something that’s crossed my mind, I’d be lying to you if I said it hadn’t,” she admitted.

“But today, it’s not happening. It’s a scary thing, I think, but I have no judgment against it whatsoever. I think improvements, if done delicately, can be made, but hopefully, I think, the greatest thing is if you can move through it naturally,” she added.

It stands to reason that Watts is passionate about women’s role in cinema — an issue that came into the spotlight at this year’s Oscars, with Patricia Arquette’s speech demanding equal pay, and that is a recurring topic at the Cannes festival this year.

“I sincerely hope that more female stories are being reflected in film because they’re just as important, and there’s as many women in the world, so why shouldn’t it be the case?” Watts said.

“Women don’t get to work with women that much in the storytelling. It’s always the man and the woman, or just the woman and the children. It’s so rare that women get to work with women, when I know for a fact, just from having great long relationships with women, we crave it. Our female relationships are such an important part of our lives, and we’ve all got great stories. I could survive alone off those,” she concluded with a smile.