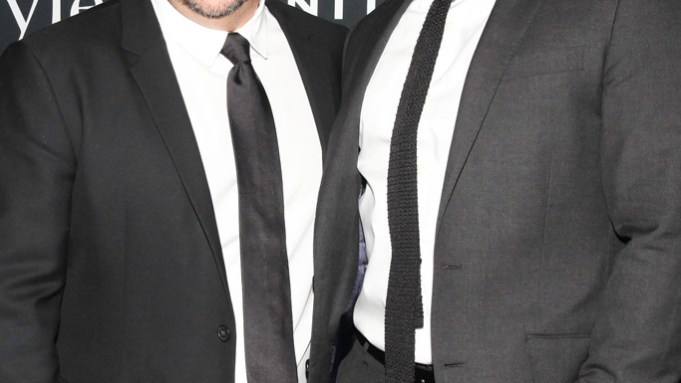 NEW YORK — Like Thalía, Rita Moreno and several of this year’s Vanidades Icons of Style winners, Narciso Rodriguez could not accept the honor without acknowledging the past.

During cocktails at Thursday’s Mandarin Oriental event, the designer said the 85-year-old magazine is part of every Latin household. “Growing up, Vanidades was really the doorway to fashion, glamour and the world outside. It’s always been sort of part of the family,” he said. “So to be recognized here tonight, having learned about fashion and to having seen Oscar’s work, Carolina’s work and Saint Laurent’s work in the pages of Vanidades as a child is pretty lovely, pretty amazing.”

Along with his presenter, Candy Pratts Price, Rodriguez had the support of his husband Thomas Tolan, and fellow designer Maria Cornejo with her daughter Bibi. Fashion Modeling & Humanitarianism award winner Arlenis Sosa, her presenter Edmundo Castillo and Icon of Style Award for Music & Entertainment winner Thalía upped the style set, as did Barcelona’s David Villa, the Icon of Style for Sports who wore a noticeable diamond stud earring. Aside from having sold 45 million albums, the singer-songwriter-author-actress-entrepreneur told WWD she can’t wait to launch her new Thalía Sodi collection at Macy’s in February.

“We’re really going nuts with that and designing everything,” she said.

Iconic Woman of Style Lifetime Achievement Award winner Moreno also spoke of her younger self. She recalled how, 77 years ago, she was a five-year-old living in a tenement 100 blocks north with her Puerto Rican mother, a self-taught seamstress who worked in sweatshops. The pair also made hand-cut crepe-paper flowers to sell to Woolworth’s for extra money, and Moreno reveled in styling her paper dolls. “Fashion is an astonishing gift. It has the ability to lift a Cinderella from the ashes,” she said. “If clothes make the person, then it is fashion that imagines what she might become.”